Phil Foden was the pick of City’s performers at Liverpool

Win, lose, draw. It is the definition of ‘a mixed bag of results’, but Manchester City have come through what is likely to be remembered as the most challenging week of their entire season, and they are not ending it with mixed feelings.

Pep Guardiola declared himself “happier than ever” with the way that his players are performing before this trip to Anfield and, despite only coming away with a point, the smile he wore after the final whistle looked a little wider.

To understand why, it is worth considering the position that Guardiola and his players found themselves in a fortnight ago, just before this run of three away games against arguably the other three best teams in Europe.

The Premier League season was only five games old but City had dropped points twice, Guardiola himself was at loggerheads with his own fans, and the failure to sign a centre forward was an easy stick to beat his side with at any relevant opportunity.

Then, their status as pre-season title favourites appeared to be slipping away. Now, anyone confidently stating that Chelsea, Liverpool or City will finish top of the pile come May is either brave or, more likely, foolish.

This could be one of the closest and highest-quality title races we have witnessed in years and the first in a long time with at least three genuine contenders. Only one of those three teams is in a stronger position than they were two weeks ago, though, and it is the champions.

City, over the past eight days, have reasserted themselves as the team to beat, not least because neither Chelsea nor Liverpool could beat them.

Granted, Chelsea remain top – and lead City by two points – but were outplayed at Stamford Bridge last week and have in general had their weaknesses exposed of late, perhaps for the first time since Thomas Tuchel’s appointment.

Liverpool, meanwhile, have moments where they look close to their pre-pandemic best of a couple of years ago, but they have now dropped points against both of their closest challengers at Anfield and have to visit both.

Compare that with City’s position, after coming through possibly the toughest three-match run possible in European football. Seven games into their title defence, they have played four of last season’s top seven away from home, including trips to Stamford Bridge and Anfield; 14 points is not a perfect return but it is more than acceptable.

For much of this opening run, they were without Phil Foden – a constant threat and named joint man of the match at Anfield – and their creator-in-chief Kevin De Bruyne. 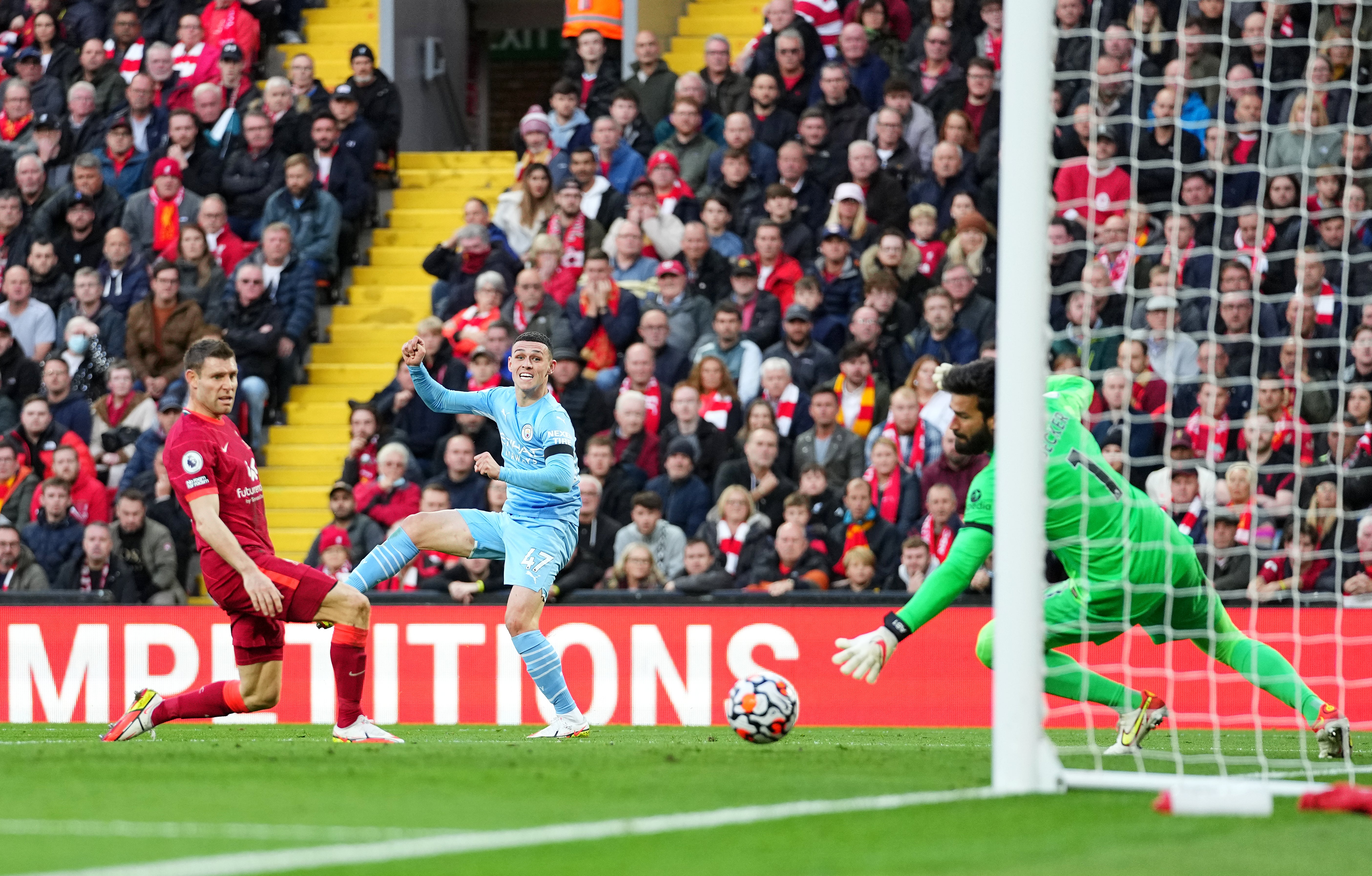 And in each installment of the past week’s trilogy of games against Chelsea, Paris Saint-Germain and Liverpool, City have played well. Only well enough to win once, yes, but try to tell Guardiola that there was room for improvement in any of their performances. To him, even the defeat in Paris was a source of pride.

“I always believed in my career that the way a team loses games is the way you show you are a great team,” he said on Sunday, reflecting on a week that was never going to make City’s season but could easily break it. “The way we lost in Paris showed me we were a good team.”

Guardiola felt exactly the same about this Anfield result. “The way we drew today showed me we are a good team,” he reiterated. “The result is the result. Paris was similar to Stamford Bridge. Today, we played massively well… Why should we be disappointed for 2-2?,” he asked. “Why be disappointed when the team played the way it played?”

There is an obvious answer to that question – “because, Pep, you did not win” – but then, there is very little any team can do when up against Mohamed Salah in this type of form. Those two moments of divine inspiration from the Egyptian should not mask how, for the most part, this was a controlled and commanding City display.

That was never more the case than at the end of the first half, when the lack of an out-ball and City’s tenacity in winning possession back over and over again kept Liverpool penned in their defensive third. It is difficult to recall another occasion when a Jurgen Klopp side has been contained so successfully despite having the space to break into.

Klopp turned and sprinted down the Anfield tunnel as he heard referee Paul Tierney blow for half time, as if knowing he could not waste a second of this chance to help his players reset, regain their composure and come up with a plan to loosen City’s chokehold on the contest. Through Salah, Liverpool did just that.

And yet, that only set up an equally impressive response from City, and you sense this was what pleased Guardiola most. In the past, and particularly at Anfield, he has watched his players collapse and concede multiple times in the space of a few minutes, breached like a burst dam.

This time, it was striking how quickly and emphatically City responded to adversity. Foden’s equaliser followed 10 minutes after Sadio Mané’s opener, while De Bruyne’s was five minutes after Salah’s extraordinary goal. It was a departure from past visits to Anfield, when either one of Liverpool’s goals would have taken the game away from City.

Perhaps that resilience in the face of adversity should not be a surprise, though, given that has been the story of their past week.

It is not yet clear quite how good this sixth edition of Guardiola-era City is, and their persistent profligacy in front of goal is a concern, but even his very best may have struggled to come out of this set of three games with three creditable performances.

Were City perfect over the past week? No, but they played well and at times they were excellent. By earning one win, one draw and one defeat that is unlikely to matter in the grand scheme of things, they have emerged from this run against three immediate rivals for domestic and European honours unscathed.

And in a worrying development for those immediate rivals, they look stronger for it.