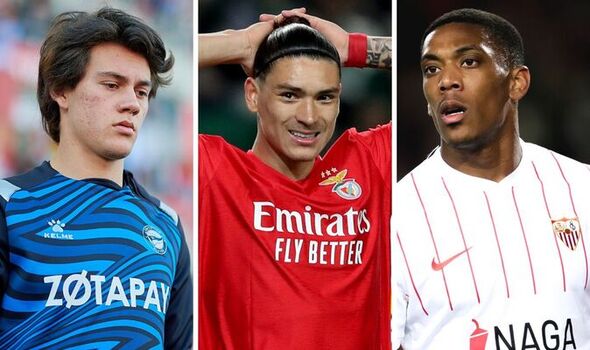 Manchester United may have to think outside of the box if they are determined to land Darwin Nunez from Benfica this summer with the Portuguese giants seemingly under no pressure to reduce their steep £67million valuation of the striker, following his eye-catching 34-goal campaign in Lisbon. The Uruguayan is among the continent’s most highly-coveted centre-forwards following a barnstorming individual season that saw him net twice against Barcelona and Liverpool in the Champions League to firmly catapult himself into the shop window.

It’s no secret that United – alongside Liverpool, Atletico Madrid and Newcastle – are amongst his long list of potential suitors but any deal is certain to cost a fortune on the basis of his prolific goal record last term.

Portuguese outlet Correio de Manha are now reporting that United have lodged a swap deal proposal that includes a sizeable bid plus the services of Andreas Pereira, who flourished last season on loan at Flamengo.

United’s plans for the Brazilian playmaker currently remain unclear but if claims of a swap deal are indeed genuine, he is the kind of profile that is likely to entice Benfica into a player-plus-cash package sale.

In England, there is currently no noise of an opening offer from United but hypothetically speaking, it may not be the worst approach to negotiations with Benfica – for more reasons than one.

First of all, the figure they are demanding for Nunez (£67m) is fairly substantial for a player that has only really produced the goods at the top level in Portugal for one season, after a difficult debut campaign with Benfica following his 2020 switch from Spanish side Almeria.

That’s no criticism of his quality or sky-high potential but given Liverpool only paid an initial £37.5m for Luis Diaz in January, an extra £30m for Nunez seems slightly excessive.

Furthermore, there are doubts surrounding United’s spending power this summer due to the lack of Champions League football, which is expected to limit Erik ten Hag’s purse strings.

That’s not to say there will be cash to spend but given that other areas of United’s squad are in desperate need of improvement, United cannot afford to blow huge money on just one or two signings, when six players are set to depart upon the expiry of their contracts in June.

That’s why it would certainly make sense to explore a player-plus-cash proposal for Nunez, particularly given some of the deadwood within the squad and the youngsters that are in need of loan moves next season.

In addition to Pereira, Eric Bailly is one player that United are set to push towards the exit door – especially if another centre-back is signed in the form of Jurrien Timber or Pau Torres.

United have struggled to find buyers for the Ivorian in recent times, despite handing him a new lucrative contract last April.

He could be the perfect player to offload in any deal and Benfica have shown a tendency to sign centre-backs from the Premier League including Jan Vertonghen and Nicolas Otamendi from Tottenham and Manchester City, respectively.

Alex Telles is another squad player worth using as make-weight and he has already had huge success in Portugal with Benfica’s rivals Porto.

If he can put his personal affiliations aside, this could be a sensible option for United with Benfica already expected to sell their currently left-back Alex Grimaldo in due course.

Anthony Martial’s stock has also plummeted following an underwhelming loan spell with Sevilla in the second half of last season.

The Frenchman flattered to deceive in Andalusia yet he is still of considerable value given he is yet to reach his ceiling. He could help drive down the price for Nunez and may welcome the chance to become a central figure in an attacking team, who play Champions League football.

Outside of the more senior players, Amad is a player who is yet to fully reach the heights expected of him following his £37m deadline day switch from Atalanta in October 2020.

A loan spell in Portugal could represent a logical step for his development after a tricky time with Rangers, despite reaching the Europa League final where the Scottish Cup winners were beaten on penalties by Eintracht Frankfurt.

Finally, Facundo Pellistri, a player Nunez knows all too well from the Uruguay national team is also set for another loan move away from United next season.

The 20-year-old has had two spells on loan in La Liga with Alaves and would also benefit from another season gaining senior experience away from Old Trafford.

Benfica have a track record for developing young talent and Lisbon could be the ideal environment to help Pellistri hone his undeniable talents – even on a temporary basis.

The connection to compatriot Nunez would add an interesting element to any potential deal, particularly if the 22-year-old striker is willing to endorse his colleague at his current club.