Gary Neville could not contain his joy at seeing Liverpool’s hopes of an unbeaten Premier League season destroyed by an inspired Watford side at Vicarage Road on Saturday night. Ismaila Sarr’s brace and Troy Deeney’s well-taken finish consigned the Reds to their first top-flight defeat of the season in a loss which was their first in the league since Manchester City beat them last January.

Neville had earlier tweeted a video of himself in the back of a taxi shouting “Just got to London and they’re bottling it again” as Liverpool were trailing in Hertfordshire.

And the former right-back, who enjoyed Manchester United’s fierce rivalry with Liverpool during his playing days, soon followed that post up with another as he celebrated the shock 3-0 defeat.

Neville pulled the cork out of a bottle of champagne and then smiled as it hit the roof, such was his delight at having seen Liverpool crumble so unexpectedly.

The video led to a whole host of responses from fans of United, Liverpool and other Premier League clubs, while his old adversary turned Sky Sports colleague Jamie Carragher took notice too. Carragher tweeted a screenshot of Neville’s face as he uncorked the bottle of wine, before changing his profile picture to that very image.

Neville’s joy is likely to be short-lived given Liverpool remain just four wins away from securing their first ever Premier League title after a 30-year wait for top-flight glory.

But he’ll take any solace he can given United’s relative struggles, with the Red Devils currently facing a battle to finish in the top four and years away from competing for the title.

Liverpool remain 22 points clear at the top of the Premier League with second-place Manchester City not in top-flight action until next week due to the Carabao Cup final. 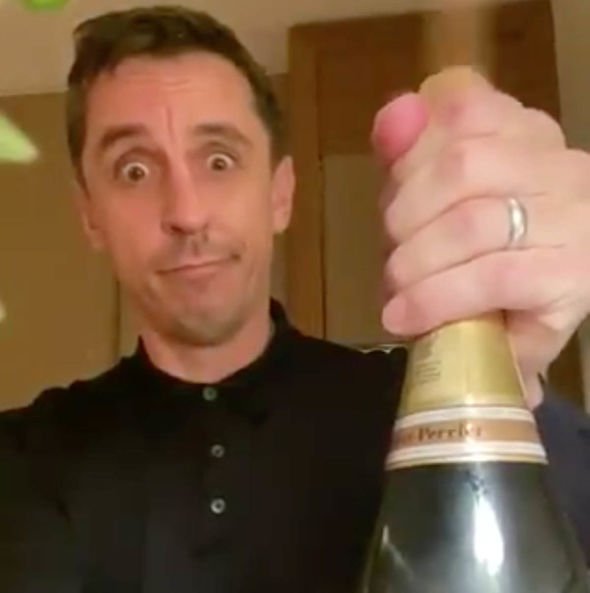 They’ve faced accusations that they’re merely making the most of the league being of less quality than usual – a jib Carragher joked about on Twitter.

Hailing the relegation-threatened Hornets, Carragher tweeted: “Watford have given [Liverpool] their two toughest games of the season. They were bottom when they came to Anfield & 2nd bottom today. It just shows how strong the [Premier League is this season.”

Liverpool will be eager to bounce back from the defeat at Watford when they travel south once again on Tuesday night to take on Chelsea in the FA Cup fifth round.

Neville will be sure to tune in on Sunday, meanwhile, when United head over to Goodison Park to face Liverpool’s Merseyside rivals Everton.