Manchester United have sent their condolences to those affected by the tragic events that occurred in Malang, Indonesia, overnight. At least 174 fans are thought to be dead after a serious riot at a match between Arema FC and Persebaya Surabaya.

Along with the growing death toll, over 180 fans have also sustained injuries and investigations are ongoing. The Red Devils responded to the matter, tweeting: “Manchester United is deeply saddened by the tragedy in Malang, Indonesia.

“We send our sincere condolences to the victims, their families, and everyone affected.” It is widely believed that the riots began when fans stormed the pitch after the full time whistle sounded, with Arema losing the match 3-2.

Police then responded by using tear gas against those supporters, with tensions already boiling over between the two clubs given that they are fierce rivals. Riots then broke out, with a stampede leading to adults and children dying. 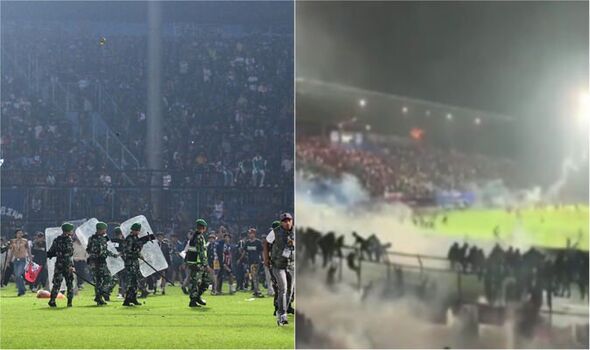 Footage on social media has shown fans trying to flee areas by climbing over fences, with young children also caught up in what is set to be one of the worst stadium disasters in history. It is believed that the tear gas also killed some supporters, unable to flee areas where the chemical was most prominent.

Local reports say that a few Arema players were caught up in the fighting after the match, being attacked by angry supporters having watched their side suffer their first home defeat in 23 years. Officials were also attacked with missiles and other objects.

Police vans were also attacked and set alight as harrowing footage showed fans fighting with police on a backdrop of tear gas and children innocently searching for safety. Sky report that relatives travelled to a morgue nearby to attempt to identify their loved ones, whilst others waited at nearby hospitals in hope that they would be able to find out more information there.

Speaking at an emergency news conference, East Java police chief Nico Afinta said: “We have already done a preventive action before finally firing the tear gas as (fans) began to attack the police, acting anarchically and burning vehicles.” He then revealed that over 300 people were being treated in hospital and that he is anticipating the death toll to rise further due to the lack of treatment available due to the surplus of patients.

All remaining BRI Liga 1 fixtures this week have been suspended, with the Indonesia FA ruling that Arema would not host any more games until the end of the season.