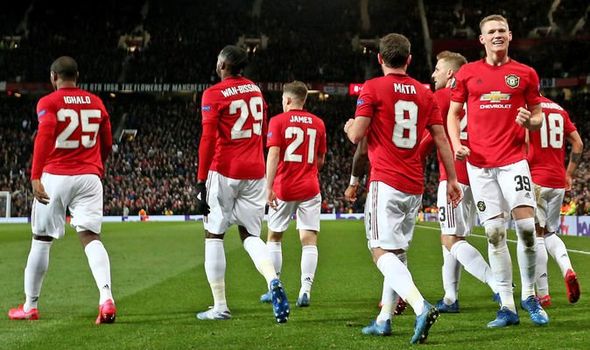 Manchester United ensured they’ll be in Friday’s Europa League last 16 draw as a commanding performance saw them cruise past Club Brugge in a 5-0 win on Thursday night. Bruno Fernandes, Odion Ighalo, Scott McTominay and Fred got their names on the scoresheet at Old Trafford.

Ole Gunnar Solskjaer’s men face a fight to finish in the top four and qualifying for the Champions League via Europe’s second-tier club competition might be their best hope.

United are in good shape to reach the latter stages of the tournament, particularly with January signing Fernandes fit and firing.

The Portugal international got the ball rolling from the penalty spot, before Ighalo clipped home, McTominay slammed in and Fred struck twice late on.

Express Sport has assessed Solskjaer’s players after the 5-0 win – but do you agree with our ratings?

Had little to do in a comfortable win but came up trumps when called upon.

Got forward well down the right wing and offered a constant attacking option.

Steady in defence alongside Maguire. Is this United’s best centre-back pairing?

Solid once again and used the ball well, marauding into space and picking passes.

Continued his recent rejuvenation with a busy performance on the left flank.

Shone on his first start since Boxing Day and weighed in with a well-taken goal.

Bagged twice when the game was already won following an industrious evening in midfield.

Buzzed about to good effect as his creative nous helped carve Brugge open time and again.

Quickly becoming a fan favourite and was cold as ice to dispatch his first-half penalty.

United’s poorest performer and in need of a rest after a hectic start to life at Old Trafford.

Scored a goal he’ll cherish and led the line well after making his first start for the Red Devils.

Provided a spark after replacing Fernandes.

Could have scored after coming on for McTominay.