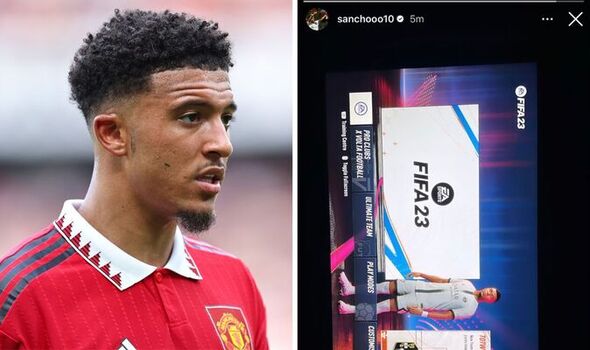 Manchester United winger Jadon Sancho appeared to suggest that he was not interested in watching England face Germany by posting a photo of him playing FIFA to Instagram shortly before kick-off at Wembley on Monday evening. Sancho was left out of the England squad for this month’s Nations League fixtures by Gareth Southgate, with his absence raising questions over whether he will be picked to feature at the World Cup later this year.

It seems as though Sancho may have been left frustrated by his omission from the England squad after making a strong start to the Premier League season with United, with the 22-year-old having scored twice in six league matches since the beginning of the campaign. He made his feelings clear on social media just minutes before kick-off between England and Germany by posting a photo of the FIFA 23 main menu to his Instagram story, which gave the impression that he had chosen to play the game instead of watching the Three Lions in their final Nations League outing.

Whether or not Sancho manages to earn a place in England’s squad for the World Cup remains to be seen, but he will undoubtedly be aiming to force Southgate’s hand by maintaining his impressive start to the campaign with United over the coming weeks. He admitted that he was frustrated to have missed out on the latest camp when quizzed on the topic after scoring in United’s win over FC Sheriff in the Europa League, a game in which he started and played the entire 90 minutes.

“Yeah, 100 per cent, that is one of the targets,” Sancho told reporters when quizzed on his hopes of travelling to Qatar with England this winter.

“It’s unfortunate that I didn’t get the call-up. But I have to just keep focusing on myself and keep on working hard, week in and week out. That’s what I’ll do.”

Sancho was not the only United player to miss out on a place in this month’s England squad, with Marcus Rashford also failing to make the cut despite a return to form under the guidance of Erik ten Hag at Old Trafford this season. The Red Devils manager refused to be drawn into offering his verdict on Southgate’s decision to omit the pair before the international break but hailed their respective starts and insisted that the best is yet to come from both players.

“It’s not up to me, it’s the manager of England,” said Ten Hag. “I cannot be in his seat, I don’t want to do it. They are progressing, they are starting the season well, they will progress even more, I am convinced of that.”

Sancho has not played for England for over a year, with his last international appearance coming against Andorra last September in which he grabbed two assists to help the Three Lions to a five-goal victory. He made three appearances at Euro 2020 and came on as a late substitute in the final against Italy before missing in the decisive shoot-out that saw England miss out on a first major trophy since 1966.

We’ll be bringing you the very latest updates, pictures, and video on this breaking news story.

For the latest news and breaking news visit: /sport

Stay up to date with all the big headlines, pictures, analysis, opinion, and video on the stories that matter to you.