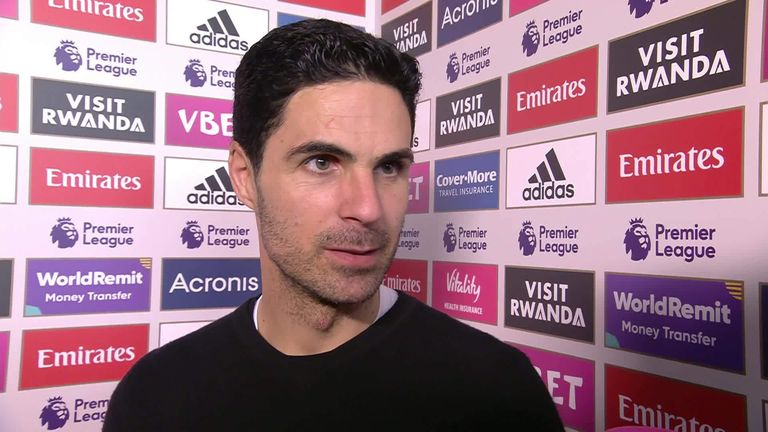 Mikel Arteta praised his Arsenal team for passing a tough test against West Ham and earning three valuable points in their pursuit of Champions League qualification.

Alexandre Lacazette stepped off the bench to tuck in a winner 12 minutes from time – a goal which was eventually given by VAR after initially being flagged for offside.

However, Arsenal had been pushed hard by relegation-threatened West Ham, with Michail Antonio missing several good opportunities for the visitors at the Emirates Stadium.

“We had the moments of luck we needed but as well it was because we had some really good individual performances at the back, sometimes to clear the ball, sometimes to make the save,” said Arteta.

“I’m really happy with the result because big teams find a way, when they don’t have the best day – which is obvious, it wasn’t our best day in terms of performance – they find a way to win it.

“You can build from there and you can learn and you can take the positives and the negatives in a much better way.

“The unity, the solidarity the players are showing, at the end it pays the price. It didn’t pay the price a few days ago when played Olympiakos here but it did today.”

Arsenal are now eight games unbeaten in the Premier League and just five points off fourth-placed Chelsea, ahead of the Blues clash with Everton on Sky Sports on Super Sunday. They will hope to take another step towards the top four when they face Manchester City live on Sky Sports on Wednesday.

However, Arteta insists his team still have plenty more improving to do before they reach the levels he wants them to achieve.

“[We’re] turning the corner in terms of results a little bit, in terms of the things I want to see from my team but they tell me now I turned the ship around but that ship still has to turn a few times more to see what we want to see,” he said.

“But it’s part of the process, it doesn’t happen overnight. There are a lot of positives we can take from the eight or nine weeks we’ve been here but it will be down to the performances we’ve put in and it will be related to the results.” 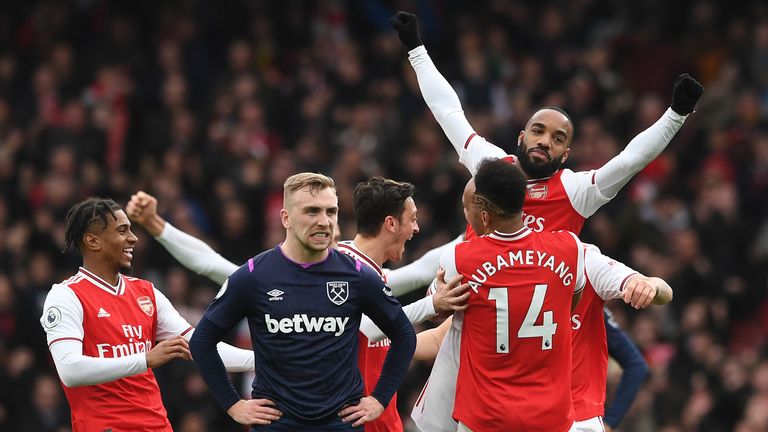 Lacazette had begun the match on the bench as Arteta favoured Eddie Nketiah to start – and Arteta says he has a healthy competition emerging between what he describes as his two main central strikers.

“I have two strikers at the moment that make life difficult for me,” he said. “At the same time it’s very good. They’re both scoring, they are both in a good moment.

“I decided to play Eddie today for the type of defenders they had and the game plan we had but knowing that Laca, if we needed a goal in the final moments, he was ready to do that.

“I saw straight away he was alert, he was focused and I could see in his face, that he was really determined to come out there and score the goal like he did.”

Asked why he doesn’t consider Pierre-Emerick Aubameyang or Gabriel Martinelli as central striking options, Arteta explained they are required to cover for shortages in other areas, with Aubameyang out on the left of the attack against West Ham, with young forward Bukayo Saka behind him at left-back.