Gerard Pique has been handed a four-match suspension for his foul-mouthed rant at a referee in his final Barcelona appearance – but his retirement from football means he won’t serve it.

The defender stormed onto the field at half-time during Barcelona’s LaLiga match against Osasuna last week and told Jesus Gil Manzano he was a ‘f***ing disgrace.’

Pique, 35, who’d announced he was hanging up his boots a few days earlier, was a substitute at the time and so never got to play in his farewell game after being sent off. 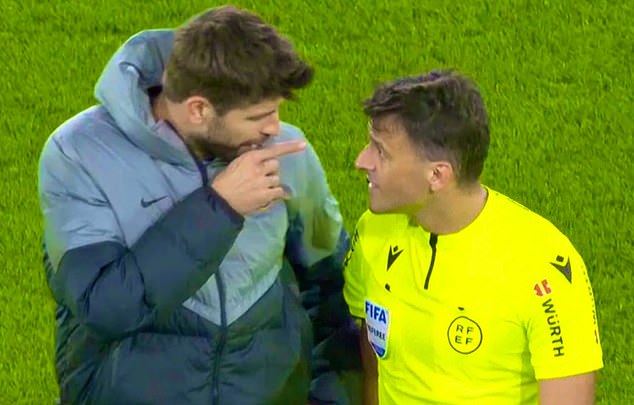 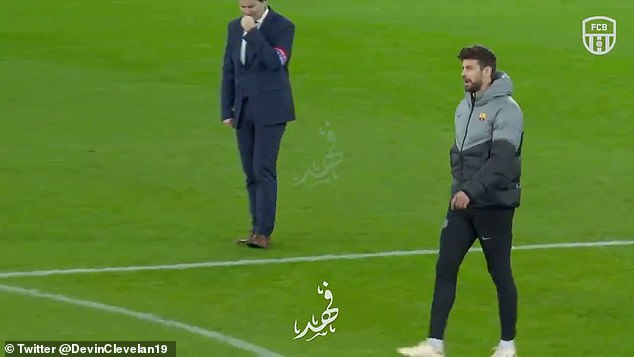 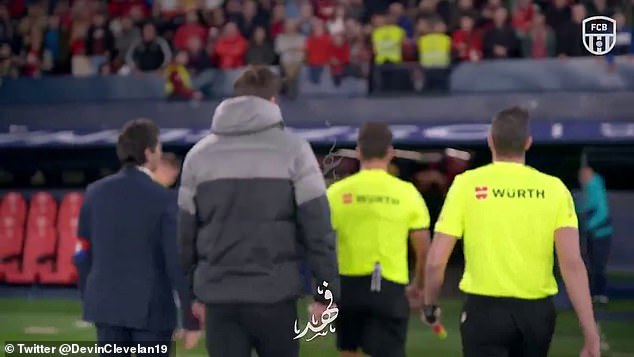 He proceeded to follow the officials down the tunnel, where he was given his marching orders

Reports in Spain say he’ll get a four-game ban despite it being the end of his career.

But Barcelona forward Robert Lewandowski will have to serve a three-game suspension after he was dismissed in the same game.

The Polish striker found himself in trouble after making a gesture as he left the field after being shown his second yellow card, for elbowing David Garcia in the face.

Manzano’s report claimed Pique said: ‘You are the referee who has most screwed Barcelona by some distance. You are a f**king disgrace.’

Some reports claimed the former Spain defender also told the referee: ‘I s*** on your prostitute mother’ but Pique strongly denied this.

Pique had been named among the Barcelona substitutes by coach Xavi Hernandez at Osasuna having received an emotional farewell in their home game with Almeria three days earlier. 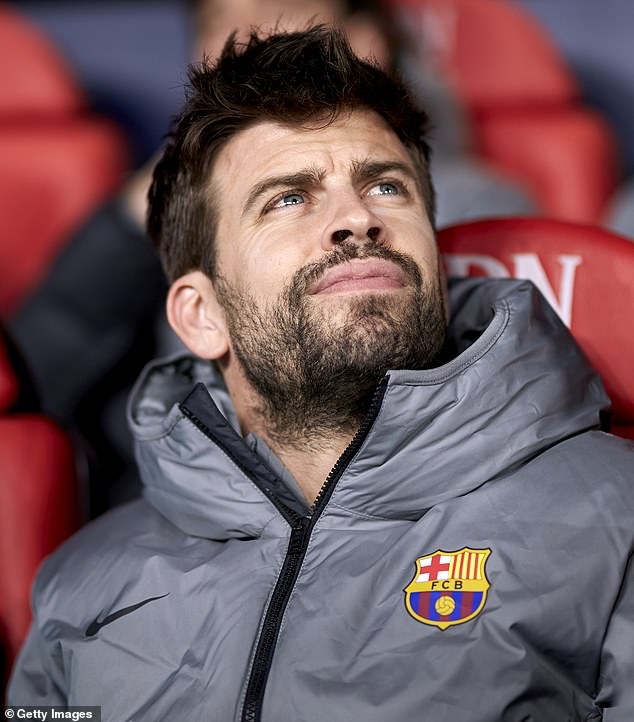 His rant was considered by many to be an unsuitable end to a glittering career that saw him play 616 times for Barcelona, winning the Champions League three times as well as eight LaLiga titles and seven Spanish cups.

Pique’s decision to retire came after a turbulent few months that saw him separate from partner Shakira and clash with the club over his salary amid Barcelona’s well-documented financial strife.

After his sending off, Pique told Ibai Llanos on Twitch that he had confronted the referee after a series of controversial decisions had gone against his side.

‘I’ve been doing interviews since I was 17 years old. Now I’m free, you no longer have to be pigeonholed and answer what you have to. I didn’t s*** on anyone’s mother,’ he said.

‘I’ll explain how it was and I understand that it’s current. At half-time, after the referee harmed us, Robert’s first yellow is not a yellow, there is no corner, then the foul on Marcos Alonso… it’s not that they are dubious plays. The corner, the ball does not pass near anyone. 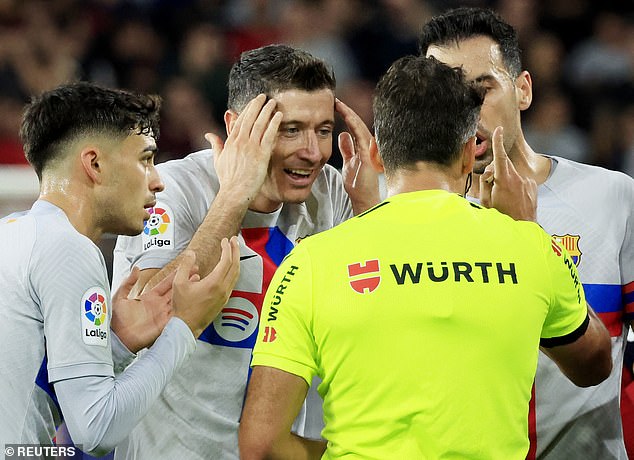 Robert Lewandowski, sent off in the same match, has been handed a three-match suspension 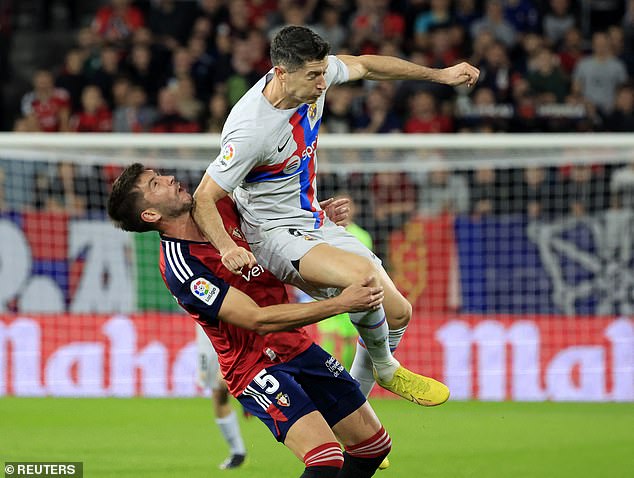 ‘We go into the tunnel and I told him that he always harms us. With that alone he sends me off. I’m surprised he sent me off for that. At the smallest thing, they send you off, you can’t say anything.

‘In the Premier League, they allow you to talk to them. I, already sent off, go into the locker room with more team-mates who came from playing.

‘There is someone inside who says ‘I s*** on the f****** mother of [the referee]. The referee listens to him from his locker room and puts the words in my mouth.’

Pique said that what is in the referee’s report does not reflect what actually happened. 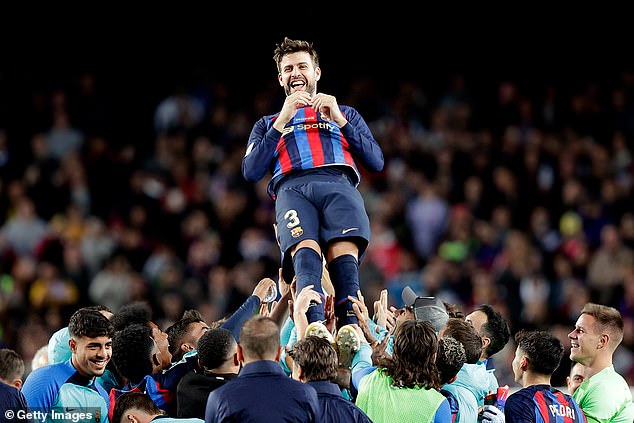 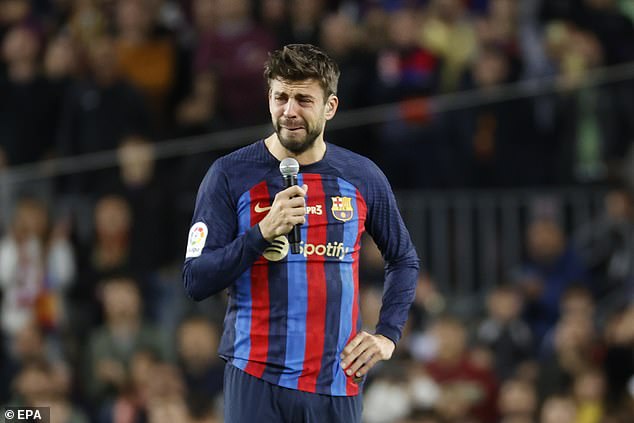 ‘What it says in the report is once I’ve already been sent off, they don’t send me off for that,’ he said. ‘They only send me off for saying “You’re the same as always”. He did it because they want to suspend me for six or eight games, even though I’m retired.’

In the end, his ban was four games though the authorities will be waiting a long time for him to serve them.

Lewandowski’s three-game ban is more problematic for Barcelona. The striker has scored 18 goals in his first 19 competitive appearances since arriving from Bayern Munich over the summer.

The Pole will miss matches against Espanyol, Atletico Madrid and Getafe after returning from the World Cup in Qatar.