LIVE: Steven Gerrard returns to Anfield to face Liverpool for the first time as his Aston Villa side take on Jurgen Klopp’s high-flyers…. while Chelsea look to bounce back against Leeds and Arsenal face Southampton

Anticipation has been building ever since the Reds legend replaced Dean Smith at Villa Park last month.

Follow Sportsmail’s Max Mathews for live Premier League coverage, with Steven Gerrard returning to Anfield as Klopp’s side host the Villans. Chelsea are also in action at home to Leeds, while Arsenal take on Southampton.

Since leaving Rangers, pretty well, by all accounts.

He’s won three games out of four, the only loss by a one-goal margin against Manchester City.

Read more about his swift revolution at Villa Park – including his policies on desserts, ketchup, watching videos and a proper work ethic below!

Come on feel the noise

… rocking Oasis cover. Gerrard has also insisted he won’t be distracted by the ‘noise’, literally and figuratively, at Anfield.

As he well knows, there will be plenty of that!

Steven Gerrard reckons – or at least claims – all the pressure is on LIVERPOOL rather than his Villa side.

Agree? Disagree? Either way, see below…

Return of the King

Excellent closer to the LOTR trilogy, and a decent way to describe Gerrard’s return to Anfield.

There are plenty of stories and plotlines from his homecoming – so why not take a look at his best and worst moments at Liverpool’s famous old stadium? You know you want to.

The big story today is Steven Gerrard returning to Anfield to play Liverpool with his Aston Villa side.

In case that isn’t enough for you (and it should be), I’ll also be covering the Ken Bates derby (Chelsea v Leeds) and the Theo Walcott derby (Arsenal v Southampton).

Also the Alex Oxlade-Chamberlain, Cedric Soares and Calum Chambers derby, off the top of my head.

WELL. WELL. Wolves were doing pretty well at the Etihad, but then just before half-time Raul Jimenez got sent off for two yellow cards in 48 seconds.

Silly stuff from the Mexican. Want to keep up with that game? See below for Isabel Baldwin’s live blog!

Never go back, says the Dennis Lloyd song. Advice Stevie G is about to ignore.

New Aston Villa manager Steven Gerrard goes back to old stomping ground Anfield this afternoon, trying to nick three points in the Merseyside cathedral that made his name.

Who’s ready for this then? 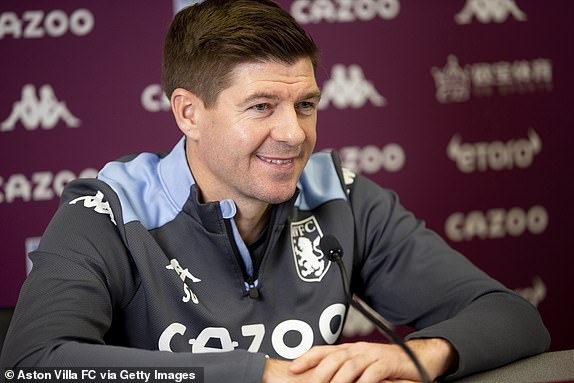