England hero Raheem Sterling simply shrugged when he was asked if his decisive goal against Croatia on Sunday afternoon justified his inclusion in Gareth Southgate’s starting side. The Manchester City winger found the net with a second-half strike that slipped past Dominik Livakovic between the sticks to hand the Three Lions a perfect start to their Euro 2020 campaign.

The result stands England in good stead to progress from Group D if they can repeat their match-winning efforts against Scotland and the Czech Republic later this month.

Despite his vital contribution on the Wembley turf, Sterling’s selection on the left flank ahead of Jack Grealish raised a few eyebrows prior to kick-off.

The City man’s inclusion had been criticised as a result of his lack of form leading up to the tournament, while his Aston Villa counterpart was arguably England’s best performer in the warm-up matches against Austria and Romania.

Southgate’s decision turned out to be an inspired one, with Sterling’s goal proving to be the difference between England and the side that knocked them out of the World Cup in heartbreaking fashion three years ago.

When quizzed on whether his selection was justified after the full-time whistle, Sterling appeared to be slightly annoyed by the question, before shrugging and explaining: “I’m trying.”

JUST IN: England fans boo and applaud as team take the knee at Euro 2020 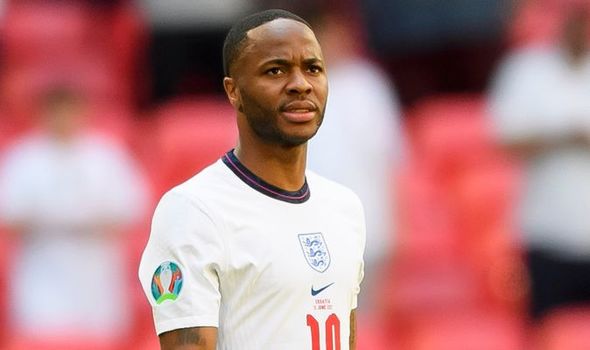 The 26-year-old went on to answer his critics by revealing that he has drawn a line under his recent Premier League campaign with City, turning his focus wholly on England as they look to claim a first trophy on the international stage since their famous World Cup win in 1966.

“There’s a lot of different reasons why I haven’t scored for my club and it’s totally irrelevant now,” added Sterling.

“I’m here with England and I’m enjoying my football. That’s the most important thing.”

Sterling grew up just a stone’s throw away from Wembley Stadium and admitted that he was delighted to produce the goods on the biggest stage, with the forward making the most of his once-in-a-lifetime opportunity to feature in a major tournament at home.

“It feels good to score. I always said if I played at Wembley at a major tournament I had to score and it’s great to finally do that,” he said.

We’ll be bringing you the very latest updates, pictures and video on this breaking news story.
For the latest news and breaking news visit: express.co.uk/sport/football
Stay up to date with all the big headlines, pictures, analysis, opinion and video on the stories that matter to you.
Follow us on Twitter @DExpress_Sport – the official Daily Express & Express.co.uk Twitter account – providing real news in real time.
We’re also on Facebook @DailyExpressSport – offering your must-see news, features, videos and pictures throughout the day to like, comment and share from the Daily Express, Sunday Express and Express.co.uk.