At a time when football grounds have closed their doors, we’ve asked Martin Tyler to share some of his favourite facts and memories of the homes of clubs around the world.

This week, Sky Sports’ Voice of Football is looking at some grounds across Europe. Today, he takes us on a trip to the the Estadio Benito Villamarin, where Real Betis play their home matches…

Keep an eye on The Football Show on Sky Sports News and @SkySportsPL for some special Tyler’s Teasers from Martin.

I have only covered one game in the home of Real Betis, which is in the beautiful Spanish city of Seville. The game was Spain 2-3 England in October 2018 in the group stage of the inaugural UEFA Nations League. The commentary position was off-centre for reasons which I never quite understood. It was level with the right-hand penalty spot. All five goals were scored at the end in the far distance, a long way to my left.

Spain took part in the opening match here in 1929, thrashing Portugal 5-0, but they did not play in the stadium again until 1983. Only France in 1991 had beaten Spain here until England in 2018. It has been the official home of Real Betis since 1936.

My memories of the ground 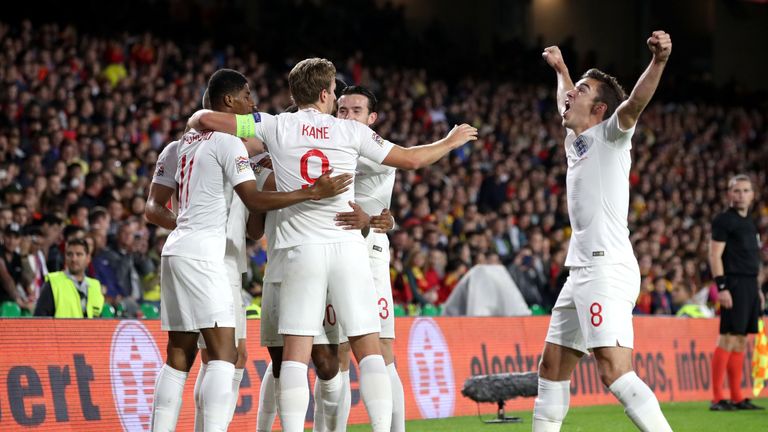 It was an evening of extremes on that Monday in October 2018.

The positive was a vibrant England performance broadcast live on Sky Sports, particularly in the first half. Since the World Cup quarter-final triumph over Sweden, Gareth Southgate had presided over just one win in five games, including three defeats. One of those was at home to Spain in the home leg of this new competition.

England had flown into Seville after the strange experience of a behind-closed-doors match in Croatia, the other team in this three-nation section. No fans in Rijeka and no goals. The signs were not auspicious.

What happened was thus very surprising – most notably to the Spanish defenders who were run-ragged. Raheem Sterling’s two previous England goals had been back in 2015. Now he doubled his tally in a vibrant England first half and in between Marcus Rashford also found the net. A majestic Harry Kane was at the heart of every England attack.

It was brilliant viewing from an England point of view. Spain had never before conceded three goals at home in a competitive international.

The hosts did not go down without a fight, though the second of their two second-half goals came right at the end of the game from a visibly frustrated Sergio Ramos. Significantly the 5-5 aggregate in the two matches finished in England’s favour because of those three away goals. A win the following month at home to Croatia would now send the Three Lions into the Nations League semi-finals. That was duly achieved after some Wembley drama.

So that evening at the home of Real Betis there were many football positives. Yet it was one of the toughest evenings of my career.

Heavy rain had fallen in the hour leading up to kick-off and at one stage it did look as the game was under serious threat. The pitch held up, but not all the television equipment. As the teams came out for the second half a series of technical failures started which undermined the rest of our coverage.

Happily the picture quality was still there and the watching of a truly famous England win was uninterrupted. But behind the scenes the situation was complicated to say the least.

Alan Smith and I were trying to put sentences together against a backdrop of chaos and crisis, exacerbated by a number of the crew not speaking English. England had only to see out the last few seconds but it felt like Smudger and I were hanging on for the entire second half.