In the latest edition of Ref Watch, former Premier League referee Dermot Gallagher assesses the key incidents from the weekend’s games, including a contentious handball decision in Arsenal’s 1-1 draw at Burnley.

INCIDENT: Arsenal felt they should have been awarded a penalty when Erik Pieters, who had his arm outstretched, looked to have handled in the area, but VAR did not deem it a clear and obvious error.

DERMOT’S VERDICT: Decision made on proximity, but Pieters fortunate.

DERMOT SAYS: “I think they went on the proximity. You can see how close the player is.

“We saw N’Golo Kante on Thursday night at Liverpool vs Chelsea. The arm was up, the arm was out, but they said it was too close. I think they followed the same premise here.

“What I would say is Pieters runs a massive risk because we all know if you put your arm out like that, you are very likely to give a penalty away. If the penalty was given, I don’t think he could have too many complaints.

“Moving forward next season, we will still have problems because it will still remain a subjective decision. There is no hard and fast way of saying, yes, that’s a penalty or that’s not a penalty. It really falls down to the individual on the day.”

INCIDENT: Further drama came as Andre Marriner pointed to the spot when Pepe’s volley hit Pieters and flew onto the crossbar. Pieters was initially shown a red card, but it was overturned by VAR official Kevin Friend with replays showing the ball struck the Burnley man on the shoulder. DERMOT SAYS: “Pieters wouldn’t have been worried whatsoever. He knew exactly where the ball had struck him and knew the VAR would identify that.

“I can see why Andre Marriner felt he’d handled the ball over the bar and if he did, it’s going to be a penalty and a red card. However, once it’s thrown to VAR, you can see quite clearly it struck him on the shoulder. It’s recommended to Marriner, no penalty and no red card.”

INCIDENT: Burnley thought they should have had a penalty of their own when Matej Vydra went down in the penalty area under a challenge from Bukayo Saka.

DERMOT SAYS: “I think Saka actually toes the ball and Vydra actually kicks his ankle. That’s then where he has the air shot and loses his balance.”

INCIDENT: Alexandre Lacazette could be heard screaming out loudly in pain in the second half when he went down under an innocuous challenge from Pieters

DERMOT’S VERDICT: Referee with your eyes and not your ears!

DERMOT SAYS: “We were talking earlier in the season about empty grounds and how it affects the referee, I should be mindful not to hear too much and that’s a classic case. You need to ignore what you hear and focus on what you’ve seen because what you’ve seen is the reality and what you’ve heard, there’s no way it hurt him that much. It’s impossible.”

“But the two things are, his positioning and he was focussed from the start. His positioning was fantastic, and he’s made the decision, he’s run it through his mind and he’s made it positively. If you watch his body language, his body movement, he’s just so positive. What that does is just diffuse everything.”

INCIDENT: Leicester felt they should have had a penalty after Lewis Dunk slid in on Jamie Vardy in the box, but referee Michael Oliver and the VAR saw a touch from Dunk on the ball during the tackle.

DERMOT SAYS: “I actually thought this was a penalty. Many people have told me it’s not, but I think Vardy plays the ball when Dunk slides in and he catches Vardy. I can understand the referee not knowing because of where he is but when it went to the VAR, they didn’t think it was a clear and obvious error. For me, I did think it was a penalty.”

INCIDENT: Nathan Tella was brought down in the penalty area by Ethan Ampadu when running through on goal. A penalty was awarded and a yellow card shown to Ampadu.

DERMOT SAYS: “It’s a penalty and a correct yellow card, not a red card because Ampadu slides in to go and win the ball. He makes a genuine attempt at it but doesn’t get the ball so, yellow card and not red because of the double jeopardy rule in the penalty area.”

Accidental handball that leads to a goalscoring chance or a goal for a team-mate will no longer be penalised next season. Do you want to see a change in the handball law for the defending team as well and are you welcoming this change? 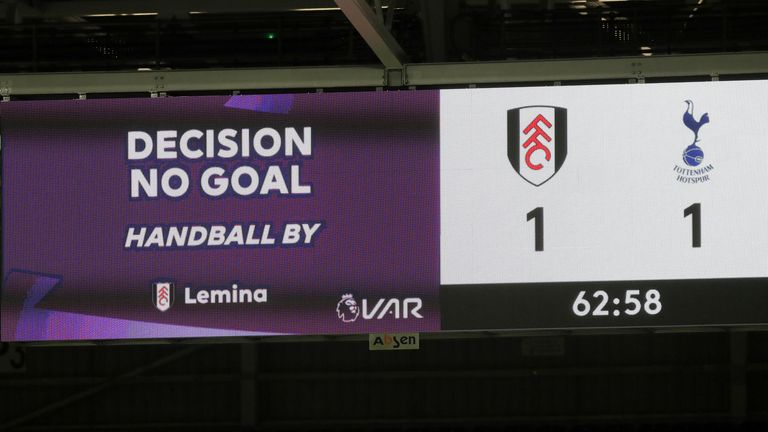 DERMOT’S VERDICT: “The fact that the Fulham goal which was disallowed on Thursday will now not be disallowed is a major step forward because there is no way Mario Lemina could have got out of the way of the ball. It was struck at him from such close proximity. As we know, it wouldn’t have been a penalty if it was a defender so that levels the playing field a lot.

“The referee will have to make that decision on the day, but the fact they have tightened the parameters in that way is a major step forward.

“One of the things they are powerless on was the Lemina incident on Thursday night. The law is quite clear that if the ball strikes his arm, rebounds to Josh Maja, which it did and he scores, it’s got to be disallowed.

“Now, I would suggest everybody in the country would say that was very, very harsh, even unfair, but unfortunately, the referee is the one person who doesn’t have a choice in that. He has to apply that law.”

The FA would welcome talks over the potential broadcast of referee audio to “demystify” the decision process. As a referee, what do you think? A good thing or a bad thing? DERMOT’S VERDICT: “It’s certainly being talked about at the moment and whether it will come, I don’t know. If it comes, it comes, and the referees will have to accept it.

“What I would say is, if it comes, it is very much like everything that’s changed since I was refereeing, we’ve got buzzer flags, we’ve got headsets and VAR. What happens is you learn to grow with it. That’s part of your game. It wasn’t part of my game because VAR didn’t exist, the headsets were just coming in as I finished.

“That may have been a problem for me but when you are starting out and you go in at that point, it’s just part and parcel of your everyday game.

“If it’s post-match and in the highlights, I don’t know how it would be put out? If it is live feed, it’s totally different because you’d hear communication as we do in rugby games where you hear referees almost coaching players through a game at times.

“At times, with no crowds at the moment, sometimes you can hear the assistants talking to players close to the touchline, being pro-active, but if it did go out live, you would definitely hear all that and if it went out post-match, do you really want to hear that? You’d only want to hear what is significant to decisions.”