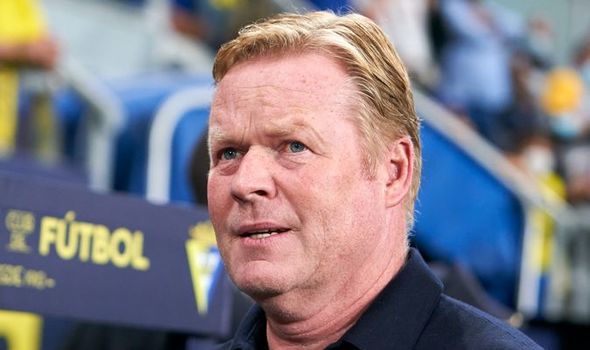 Ronald Koeman has revealed that he said ‘goodbye’ to Barcelona president Joan Laporta in a subtle hint that he could depart the La Liga giants. Koeman has endured a difficult few months as Barca boss and is under pressure to turn around results.

The Catalan club suffered their lowest league finish in 13 years last term as Koeman’s side finished below Atletico Madrid and Real Madrid.

They have also had a terrible start to this season and in particular their Champions League campaign. Bayern Munich comfortably won 3-0 and Koeman has downplayed the 2015 winners’ chances of lifting the European title.

Barca then relied on a late Ronald Araujo goal to clinch a draw with winless Granada at the weekend which was followed by a goalless stalemate with Cadiz on Thursday.

There have been several reports that Laporta is lining up replacements for Koeman and the Dutchman has now suggested that he could be set for frank talks with the club president.

Koeman has said that he said goodbye to Laporta the last time they spoke and will only talk again ‘if’ the Spaniard wants to.

“The president has gone to the hotel and we said goodbye,” Koeman said.

“We probably have more days to talk if he wants us to talk.”

Koeman defended the performance of his players against Cadiz, who have won just one of their six LaLiga matches.

“It’s not just about the result, you have to analyse the attitude and the work rate,” he added.

“I can’t complain. We’ve had four or five chances and we haven’t scored, so for that reason I am not happy.

“But what I will take with me is the attitude of the team and not my personal situation.”

The Dutchman incredibly refused to answer questions from the media in his pre-match news conference. He instead read a prepared statement which offered a blistering defence of himself and of his players.

“The club is, with me as coach, in a situation of rebuilding. The financial situation of the club is connected with the sporting activities, and vice-versa,” an excerpt of the statement read.

“This means that we, as a team, have to rebuild the football team without having to make any big financial investments.

“This means that the young talents of today could end up being the next world stars in just a few years.”

It continued: “The process that we’re in right now, the staff and the team deserve unconditional support in word and in actions – the support of the technical staff.

“I understand the press recognise this process. It is not the first time in FC Barcelona’s history that this has happened.

“Us and the players are very happy with the great support like we had in the match at home against Granada.”
Source: Read Full Article