The muted celebration was out of keeping with the significance of the goal. Thirteen minutes were all that stood between Rangers and the deepening of their domestic form slump when Ryan Kent provided a desperately needed shot of relief.

Kent drifted inside off the right flank, working the ball onto his left foot for a strike that nicked off Ricky Foster as it skidded inside Ross Laidlaw’s right-hand post.

The £7 million man stood motionless as he was crowded by team-mates who had feared yet more questions about their mentality were about to be posed. A little thump of the club badge followed as Kent looked towards the travelling support massed at that end of the Global Energy Stadium. Their three-and-a-half journey home had just become that little bit less painful. 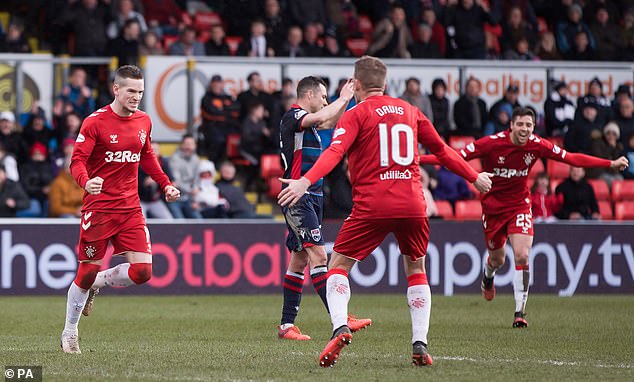 Kent raised eyebrows recently when confessing that Rangers preferred to be underdogs. Coping with the pressure of expectation should be pre-requisite for anyone employed at Ibrox, but Steven Gerrard’s squad have struggled woefully with it since the winter break. The Ibrox manager is doubtless thankful that Kent has delivered a first win in four against Scottish opposition.

Gerrard has declared he has the full support of chairman Dave King and the Ibrox board, but is more than savvy enough to know this must mark the start of a revival over the final weeks of the campaign.

The next seven days will pose a sizeable test on their own. It was also Kent who struck in Braga last month to set up Thursday evening’s Europa League last 16 first leg against Bayer Leverkusen at Ibrox. Then comes a visit from Celtic.

The gap between the Old Firm rivals is back to 13 points, with Rangers holding a game in hand. Pride may be all that is now that is at stake, but Gerrard’s men can ill afford a derby defeat. 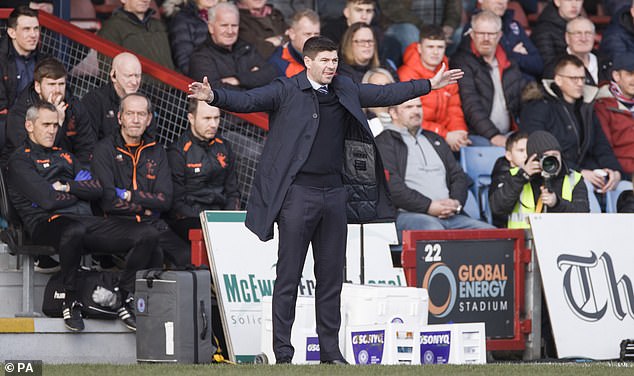 Ross County have never beaten Rangers. They had chances in the second half to possibly amend that record, but couldn’t quite prise open the cracks in the visitor’s armour. They remain in relegation danger, sitting just two points ahead of 11th placed St Mirren.

Everything seemed possible for Rangers when they were last in Dingwall. Ryan Jack and Alfredo Morelos both netted twice in a confident, error-free 4-0 victory that kept Gerrard’s men level on points with Celtic after 11 games. That outing was the prelude to a Betfred Cup semi-final won in similarly convincing fashion. Four months on, such certainty has begun to feel like a very distant memory.

Jack missed out on a return to the Highlands through injury, which was also the reason for the absence of under-fire captain James Tavernier.

On Friday, Gerrard said he would be speaking to the right-back to assess his physical and mental state. Already facing plentiful criticism for his on-field displays, Tavernier had managed to draw further anger from supporters through comments about Rangers’ domestic difficulties that appeared in the match programme for last Wednesday’s dire home defeat to Hamilton. 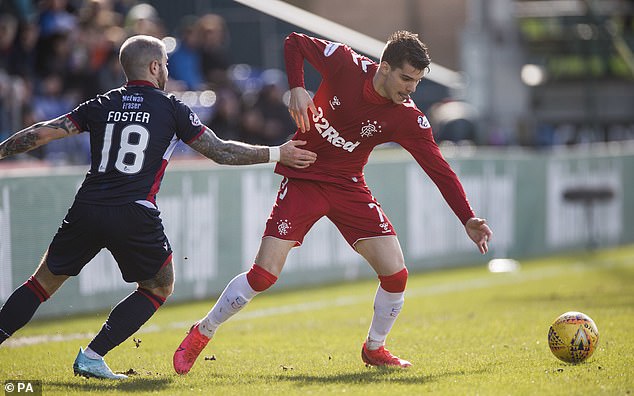 Having retired hurt in the second half of that game, his place went to fit-again Matt Polster – while the armband was relocated to Connor Goldson. There was also a recall for Kent, with Florian Kamberi dropping to the bench.

It felt like a day in which the first goal would be critical. Securing it would allow Rangers to grow confidence. Otherwise, County could pick away at their nerves.

The Ibrox side sought to inject tempo into their opening efforts. With limited success. Glen Kamara saw a second-minute strike from the edge of the area beaten out by Ross Laidlaw after the County defence had only partially cleared a Borna Barisic corner.

Gerrard needs the Barisic assist-machine functioning again. One devilish delivery towards the far post required evasive action from Ricky Foster to knock behind. Steven Davis then tried to maintain some momentum by pinging a lovely pass to Kent in an advanced position on the left.

The former Liverpool player darted infield before unleashing a shot that was parried by Laidlaw. Kamara helped keep the threat alive, forcing the ball to break to Morelos for a swiped attempt the home keeper blocked with his legs.

An even better opportunity arrived for the Colombian on 27 minutes. A less than perfect first touch robbed him of some space, however, allowing home captain Marcus Fraser to block his eventual drive. Rangers are still awaiting the reappearance of the pre-Christmas incarnation of their top scorer and biggest asset.

Gerrard’s team had the greater territory and possession, but their output was pretty pedestrian stuff. The travelling support looked on with the anxious feeling that they had seen this movie before. And they didn’t much like it.

County’s best opening of the half had arrived back on 11 minutes when a Josh Mullin corner picked out Ross Stewart, making his first start of 2020. Stewart got decent power on a downwards header but it was halted inside the six-yard box by Polster’s intervention.

The American felt he should have earned a penalty at the other end eight minutes before the break. A driven, low cross was blocked on the slide by Liam Fontaine, booked earlier, with Polster adamant an arm had been struck. Television replays suggested it was a decent claim but referee Andrew Dallas was unmoved, warning Morelos for the extent of his complaints. 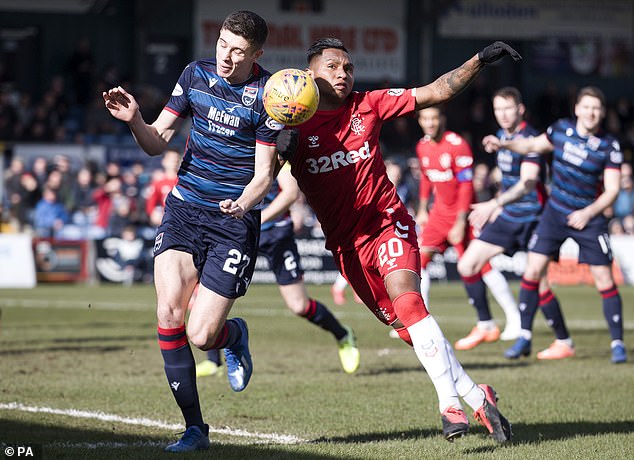 Defensive disasters had afflicted Rangers against both Hearts and Hamilton. They almost made it a unhappy hat-trick five minutes after the restart here.

George Edmundson played Joe Aribo into trouble. The Nigerian practically had Don Cowie inside his jersey by the time he received the pass, with the veteran midfielder winning the ball and knocking it inside for Billy McKay. Allan McGregor had to thwart his low shot to preserve parity.

That glimpse of goal grew belief in County. They forced another scare eight minutes later.

This time, Jordan Tillson robbed Davis to begin a move that fed Josh Mullin on the right. He drifted inside Edmundson before sliding a well-weighted pass for Stewart, advancing into space. The build-up deserved far better than a left-foot slash that soared woefully high.

Mullin showed how it was done by going himself shortly afterwards. He got his laces through one that McGregor had to top over. Rangers were creaking.

Gerrard had to do something to change it. His call was to replace Hagi with Kamberi. The Hibernian loanee hadn’t been on for long when he spun onto Kent’s cross for a shot deflected wide. From the resulting corner, Aribo looped in a header that was brilliantly cleared under pressure by Iain Vigurs as he protected the far post.

Kent made the difference just as yet more misery for Gerrard loomed, with substitute Jordan Jones then denied a second before the end.