Football Australia chief executive James Johnson has warned A-League clubs are losing out on millions in potential revenue by not tapping into football’s booming player market, while revealing plans for a domestic transfer system have hit a roadblock due to stakeholder disinterest.

Johnson praised Adelaide United and the club’s former director of football, Bruce Djite, for their handling of Riley McGree, whose transfer to Middlesborough has netted them up to $1.375 million in sell-on clauses – on top of their original sale of the fringe Socceroos midfielder for around $820,000 to Major League Soccer outfit Charlotte FC in 2020. 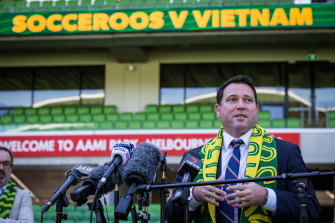 But Johnson said such deals were the exception, not the norm, in Australia, and that other clubs needed to learn how to properly leverage the international transfer market – particularly through sell-on fees which can earn money long after a player has left the A-League but are uncommon in most outbound transfers.

With match-day revenue hit hard by the pandemic and broadcast distributions lower under the new TV deal with Channel Ten, many clubs are living off the largesse of sponsors and owners and are focused on making ends meet day-to-day. Sources say clubs also routinely waive their right to training compensation, often in the order of several hundred thousand dollars, for younger players who move overseas. Johnson said they were missing the bigger picture and how a shrewder understanding of the transfer market could help their bottom lines.

“There are numerous ways that our clubs can be more efficient and effective in the international transfer market. The first is not waiving international training compensation that clubs are entitled to under FIFA regulations. The second is understanding the importance of negotiating sell-on clauses into contracts, because it is usually the subsequent transfer where clubs can generate revenue, not the initial transfer. 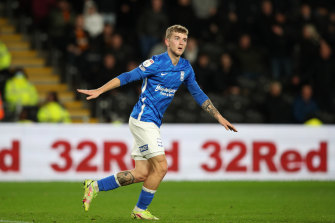 Riley McGree’s 30 appearances for Birmingham City were enough to convince rivals Middlesborough to pay a premium for him.Credit:Getty

“In the case of Riley, Adelaide have understood the importance of sell-on clauses and they will benefit from Riley’s transfer even though the transfer was between a US and English club.”

FIFA’s annual transfer report showed there was US$4.86 billion spent on transfer fees in the men’s game worldwide last year. But Australian clubs only received $1.1 million in revenue – lagging even the likes of Cyprus ($5.5 million), Kazakhstan ($7.4 million) and Hungary ($11.9 million), let alone the sport’s established powers.

“The difference isn’t the quality of players,” Johnson said. “If we put our national team versus Hungary on a football pitch, I don’t think they’re going to beat us 11-0. They’re not 11 times better than us, but in the transfer market the data suggests they are because they’re generating $11.9 million and we’re generating $1 million.”

One of Johnson’s main priorities since taking the top job at FA in January 2020 has been to introduce a domestic transfer system. While they are free to deal internationally, clubs here are banned from exchanging players with one another for cash unlike in most other countries – the legacy of a 1994 Senate inquiry into corruption in Australian soccer which recommended the abolishment of the domestic system.

Johnson argues that by aligning with global standards on transfers, Australian clubs at all levels will be able to operate with a single mindset when contracting players rather than having to navigate two different systems at home and abroad. The A-League’s salary cap, which the Australian Professional Leagues are keen to retain as a control on spending but the PFA says is incompatible with a transfer system, is another major structural barrier to this shift in thinking, Johnson said.

“In a country like Hungary and most advanced regions of world football, clubs operate in a domestic transfer system that is aligned with the international transfer system,” he said.

“Club executives wake up every day thinking about player registrations as assets and consequently players, particularly younger ones, end up with longer contracts. On the other hand, in a salary cap system, player registrations are often seen as taking up space in an annual playing budget, which often leads to players ending up with shorter contracts. Shorter playing contracts inevitably leads to less revenues for clubs through international transfers as players move as free agents, meaning there is revenue leakage for clubs.”

However, more than 12 months since FA released a white paper detailing what a domestic transfer system could look like, Johnson said the process of re-introducing one to Australian football had ground to a halt.

“The blueprint is there, and a set of regulations are already in draft – we can implement them quickly,” he said.

“However, the challenge is there is not sufficient stakeholder buy-in at this point, and before you introduce such a system, it really needs to come with strong support of the stakeholders. That’s where the speed bumps are.

“We can’t really impose a transfer system without getting strong buy-in from the stakeholders, so the challenge is really getting the clubs across the country to realise this is an opportunity to improve the level of football on the sporting side, but also improve their finances.”