Newcastle’s goal drought is finally over and they could hardly have asked for more help at Southampton.

They played against ten men for over an hour, had two big VAR calls go their way – including a Premier League first use of the pitch side monitor and second which gave them a penalty, one of many big chances they spurned.

It was not until the 79th minute, though, that they finally ended their long wait for a Premier League strike when Allan Saint-Maximim raced through to score a desperately-needed first in the league for five games, a dry spell dating all the way back to January. 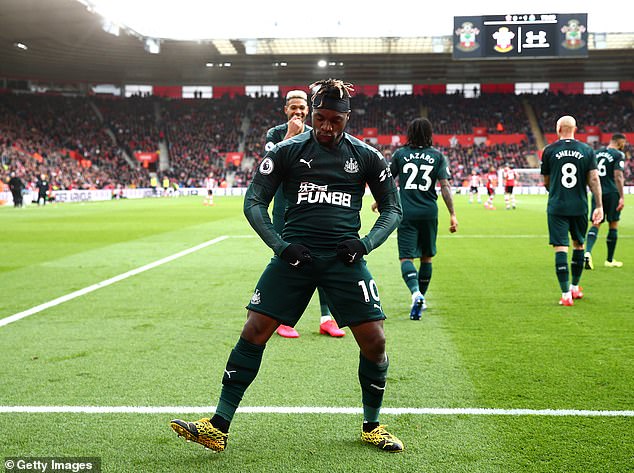 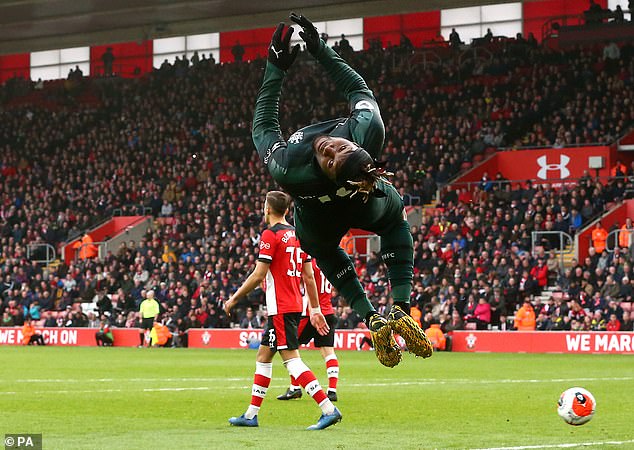 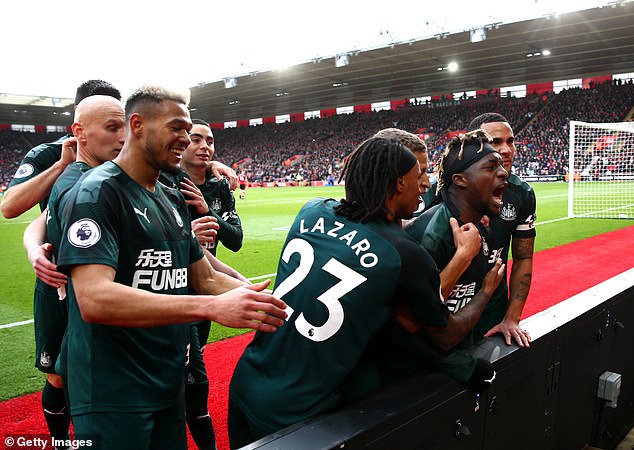 In keeping with what had gone before, they were gifted it when Yann Valery’s delay as he attempted to cut out Sean Longstaff’s through ball with his first touch after coming on, proving so costly.

Had Newcastle failed to score at St Mary’s it would have been right to be totally baffled.

They got their first helping hand when Moussa Djenepo was sent off after referee Graham Scott became the first referee to make use of the VAR screen next to the pitch.

Matt Ritchie then missed a penalty, one of many clear opportunities Bruce’s men had to find the net before Saint-Maximim eventually did late on, to earn Newcastle just their second win at Southampton since 1972.

Untimely dips had left both of these sides still looking over their shoulders heading into the final ten games. 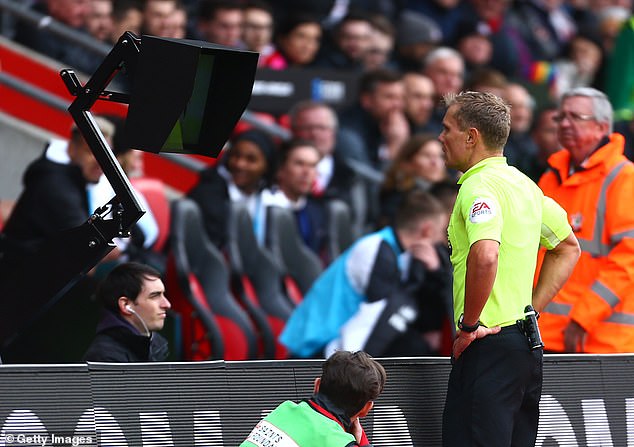 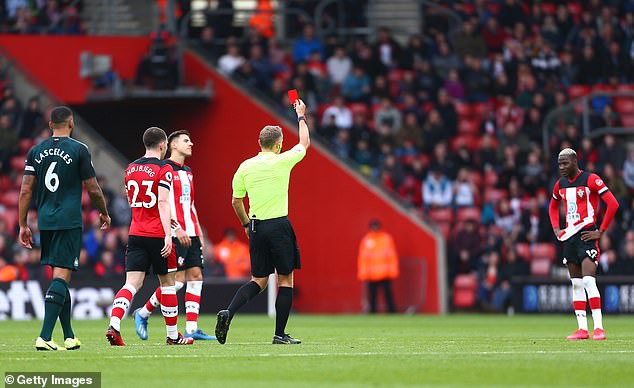 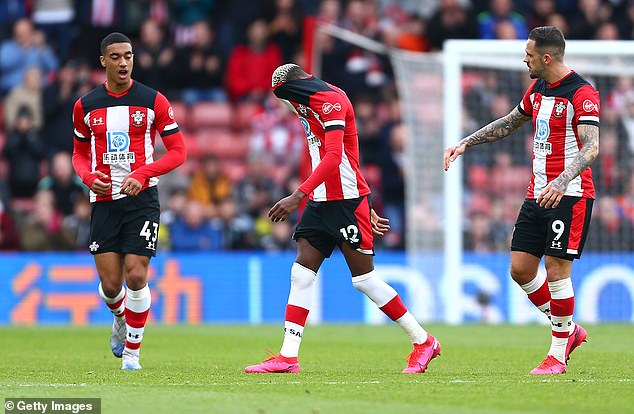 Southampton had lost three of their previous following a largely impressive run since November which had hauled them up the table.

Newcastle had forgotten how to score goals at the worst possible time and kicked off just five points above the drop zone after four successive league games without a goal.

After surviving a frantic beginning in front go their own net Newcastle’s drought should have been over. It was only down to the astounding heroics, alertness and athleticism of Alex McCarthy that it was not.

Eight minutes in Jonjo Shelvey got away down the right, cut back inside and poked a cross into the Southampton box.

A lucky ricochet sent the ball spinning perfectly into the path of Dwight Gayle but McCarthy was quickly off his line to smother. And he was not done there. Up he got rapidly to fling himself to his left and keep out Miguel Almiron’s follow up and then lift himself off the ground a third time and extend himself once more to fingertip the Paraguayan’s second attempt into the side-netting.

It was a remarkable triple save and the perfect response after being at fault for Sebastian Haller’s goal for West Ham seven days earlier. 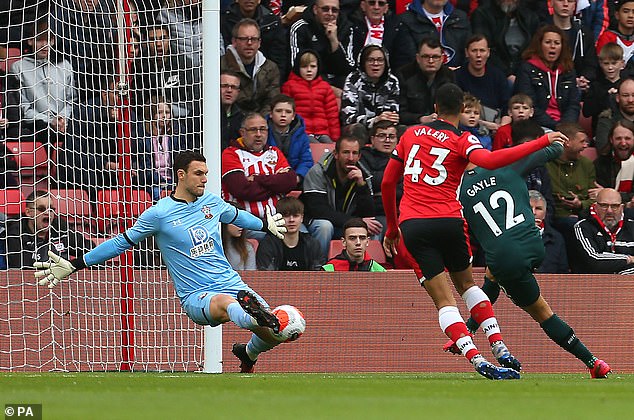 It was also not the first time Southampton were indebted to their impressive goalkeeper.

Southampton were playing the better football without fashioning the chances their possession warranted. Indeed, it was not until the 24th minute that Yann Valery anything to do.

Three minutes later, a game that was ambling along exploded into life with the first major talking point.

Djenepo overran the ball and, perhaps lazily, hung out a boot as Isaac Hayden cleared which came crunching down onto the Newcastle midfielder’s ankle.

Scott initially awarded a yellow card but was advised to have a look at the pitchside monitor by VAR Peter Bankes at Stockley Park. The upgraded red card that followed for he crestfallen, recalled winger was inevitable.

Instantly, the momentum swung Newcastle’s way and Gayle should have benefitted, seeing a header saved by McCarthy and then side-footing Allan Saint-Maximim’s cross wide.

Jamaal Lascelles then had a goal ruled out for offside but Southampton were soon cursing VAR once more on the stroke of half time.

Sofiane Boufal looked to have got away with his attempt to spark a counter attack by leaning into the ball in his own box.

But during the next break of play the VAR officials ruled he had done so with his hand and Scott correctly pointed to the spot.

With McCarthy in the form he was in, though, it was no surprise when he plunged to his left to keep out former Portsmouth midfielder Matt Ritchie’s penalty. 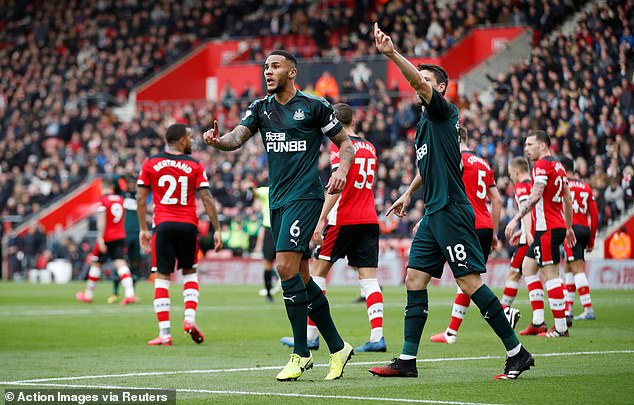 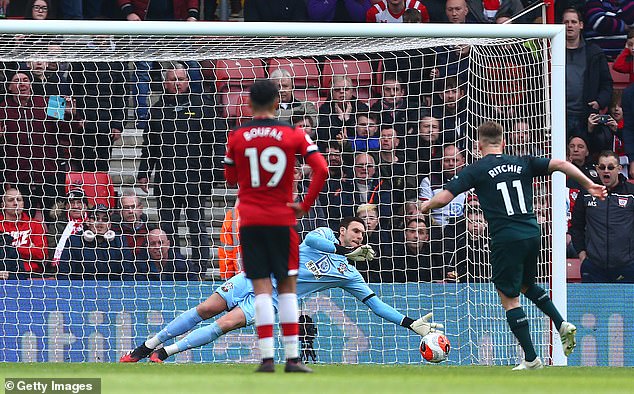 After Djenepo’s dismissal, Javier Manquillo could consider himself fortunate to only get a booking after sliding into Ryan Bertrand and studding the Southampton left-back in the chest. Scott departing at the break to jeers and as public enemy No.1 was predictable.

Having ridden their luck to reach half-time level, Southampton started the second half the better side. It was as if they realised that even a man down there was something in this game for them.

Shane Long fired their first chance of the half over, an indication of the threat they would still pose even with a disadvantage.

Just after the hour Bruce chucked on a second striker in Joelinton, though how much added goal threat he gave Newcastle having scored just one league goal in 28 appearances was a fair question.

As the game entered the final quarter, Southampton seemed content to hold what they have. Meanwhile Newcastle’s growing desperation as summed up by Lascelle’s attempting to find the net from 30 yards. He failed.

Long came a little closer, making sure the underworked Dubravka was still awake with a 25 yard volley.

Bruce had one throw of the dice left and chucked on Sean Longstaff with 11 minutes left. That decision paid off instantly.

He clipped a teasing ball into the left channel, Valery dallied but Saint-Maximim did not before squeezing the ball past McCarthy to spark wild scenes of celebration in the away end, including his own impressive acrobatics just in front of it. 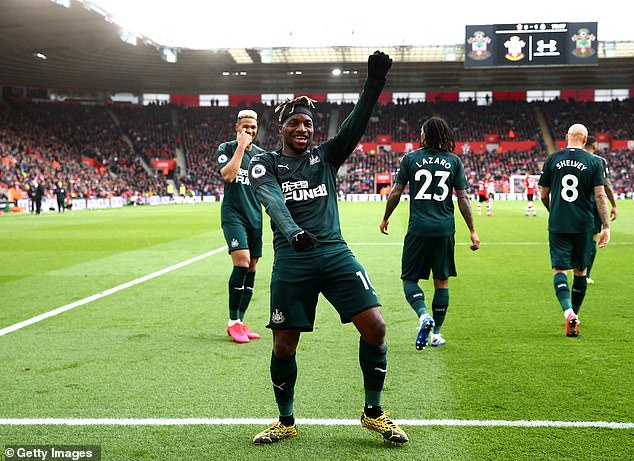 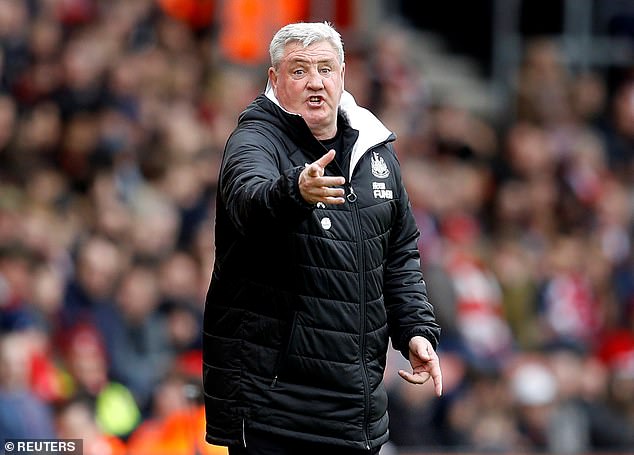 Man of the match: Alex McCarthy