The Matildas’ welcome-home party after a near 600-day absence had all the hallmarks of a disaster waiting to happen. The team had rarely been under as much pressure, having returned home mired in a form slump and amid mounting disquiet over the culture of the team and women’s football in general. Then, there was the might of Brazil to contend with on the pitch.

However, Australia pulled out their best performance under coach Tony Gustavsson, cruising to an emphatic 3-1 win over the Selecao at CommBank Stadium on Saturday night.

According to forward Caitlin Foord, the impressive display wasn’t motivated so much by the chance to answer their critics as by finally being able to play before their passionate home fans again for the first time since March 2020.

“I don’t even think there was pressure going into this game,” Foord said. “We just wanted to enjoy it being on home soil with home fans, it was well overdue. I think that’s what got just through… the buzz of the fans.”

Goals from Clare Polkinghorne, Mary Fowler and Emily van Egmond sealed the big win over the visitors, but the South Americans will be tougher when the sides meet again on Tuesday night in Parramatta. Six-time world player of the year Marta is set to have a more influential role than during the 19-minute cameo she was given on Saturday night. 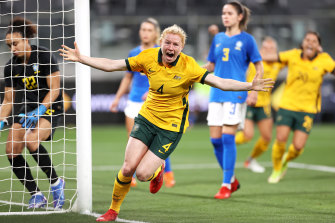 Polkinghorne expects a tougher test against Brazil on Tuesday nightCredit:Getty

The veteran playmaker may be in the twilight of her career but still remains a vital cog in Brazil’s attack. While the toll of long-haul travel and two games in three days may have led to the 35-year-old to be spared from 90 minutes on Saturday, the Matildas are preparing for Marta to take centre stage on Tuesday night.

“It’s obviously going to be another tough contest, we will ensure we recover properly, look at the video, look at the things we can improve and, hopefully, we can get a win on Tuesday,” Polkinghorne said.

Gustavsson used the match as another opportunity to build squad depth ahead of the 2023 Women’s World Cup on home soil. Western Sydney Wanderers forward Bryleeh Henry and Sydney FC forward Remy Siemsen made their debuts, both coming off the bench in the latter stages to begin their international careers.

While it was only for a matter of minutes, the 21-year-old Siemsen described the experience as “a dream come true”, making the leap from the stands of CommBank Stadium as a supporter of the Matildas to coming off the bench wearing the colours of her country.

“It felt so surreal. I have followed this team for so long and I was definitely one of those little kids on the other side of the fence cheering on the Matildas, as well as my favourite women’s A-League team, Sydney FC.

“It was really special to me,” she said. “It just goes to show that if you really desire something and you really want it, you can definitely achieve it.”