The north London derby has finally come to life in the women’s game and, against all the odds, Tottenham have their first point against Arsenal.

It could have been all three and it is testament to the work manager Rehanne Skinner has done that they were left disappointed with a 1-1 draw at full-time.

Before today, there had been little rivalry between Arsenal and Tottenham women – on the pitch at least. The Gunners had won all three of their previous WSL meetings, scoring 11 goals and conceding just one. 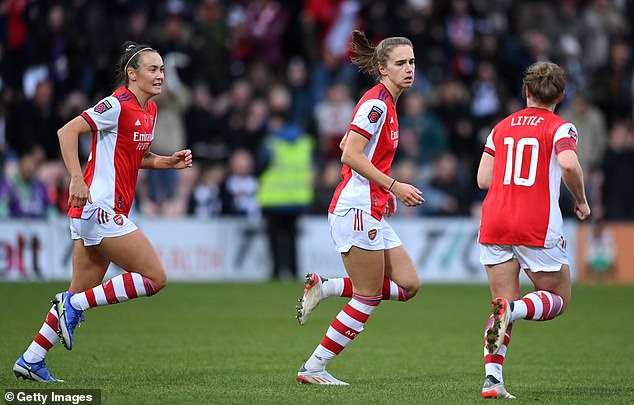 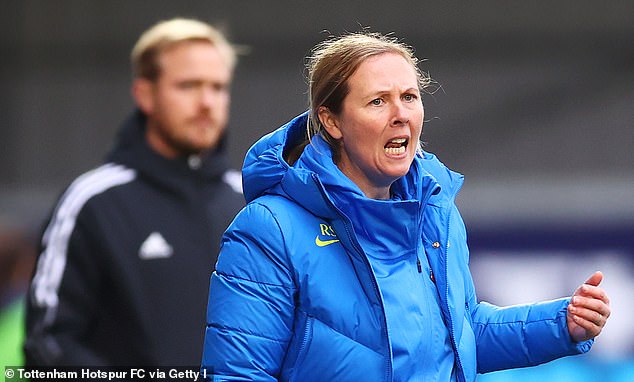 Spurs were only promoted to the top flight in 2018. They do not have Arsenal’s history of domination and cannot match the countless trophies they have won over the years.

But they now have something to build on and have shown they can compete with the best of the WSL. Skinner has worked wonders in making Tottenham a competitive top-flight side that now look like real contenders for a top three spot.

Arsenal have been by far the best team in the WSL this season. Before today they had not gone behind in a league game and had averaged nearly four goals a game.

In truth, they could have been out of sight by half-time and Spurs had the woodwork and goalkeeper Tinji Korpela to thank for keeping the score at 0-0 in the first half.

Beth Mead could have put Arsenal ahead inside the first minute when she was picked out by Vivianne Miedema at the back post. But Korpela spread herself well to make an impressive stop. 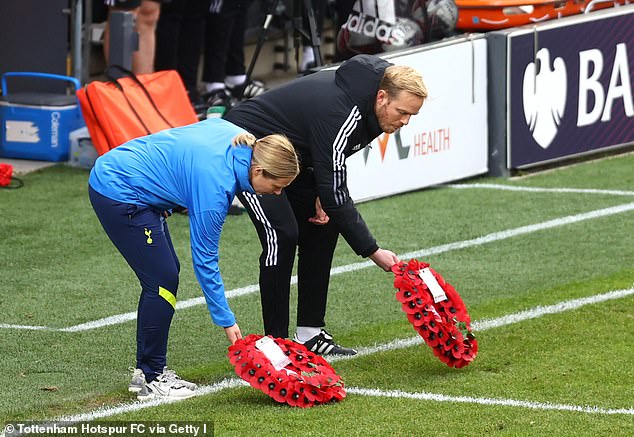 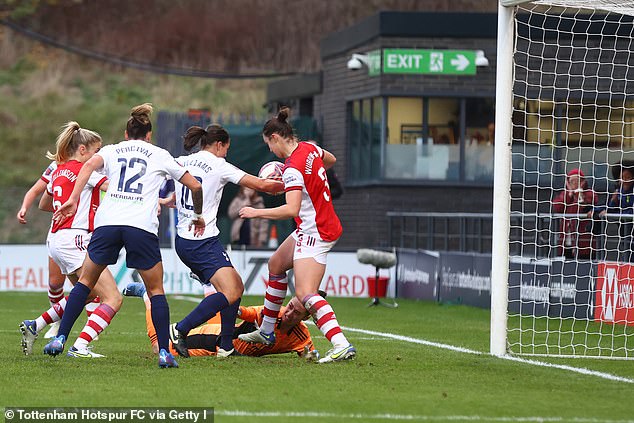 Korpela was called back into action in the 20th minute when Miedema cut in on her left foot, but her fierce effort was well held by the goalkeeper.

Arsenal continued to be frustrated by an industrious Spurs side but they were left scratching their heads as to how they were still level in the 25th minute.

Mead’s thunderous free-kick smashed against the underside of the crossbar before somehow hitting the inside of the right post and bouncing out for Spurs to clear.

It was then Katie McCabe’s turn to be denied by the woodwork as her fierce left-footed shot hit the crossbar and bounced over. Kim Little then fired a shot straight down the throat of Korpela just before half-time.

Tottenham tried to start the second half on the front foot but it was quickly Arsenal who were dominating proceedings and they had to call on Korpela to keep them in the game and once again it was Mead who was denied. 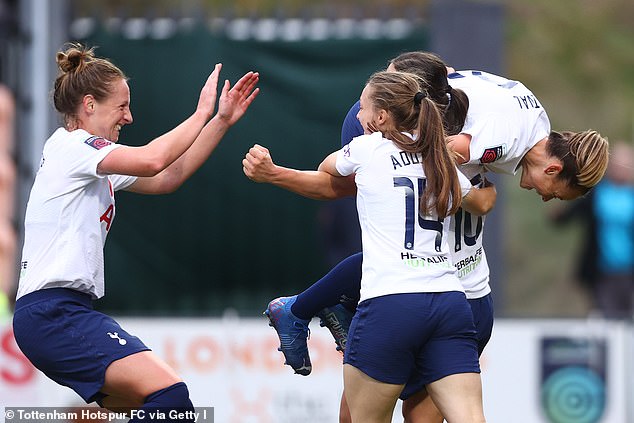 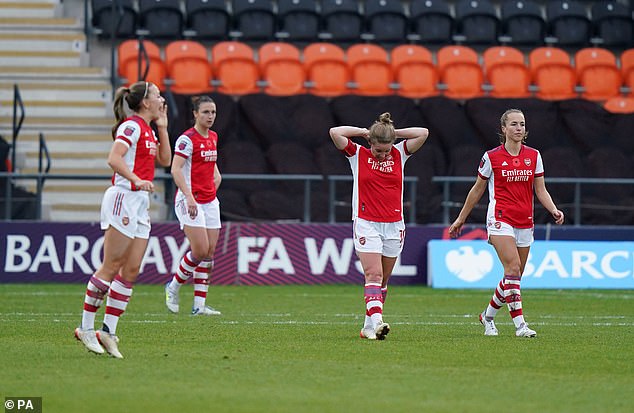 Steph Catley’s cross found the winger in the middle but Korpela spread herself to make an incredible point-blank save in the box.

Ashleigh Neville then made a last-ditch block to deny Miedema before the Dutch striker headed Noelle Maritz’s cross over the bar.

And in the 65th minute Tottenham did what Arsenal had failed to do – put the ball in the back of the net. Kyah Simon’s cross picked out Kit Graham at the back post.

Her shot was saved by the feet of Manuela Zinsberger but the ball fell to Rachel Williams and she managed to bundle it over the line after Zinsberger and Lotte Wubben-Moy got in each other’s way.

Shelina Zadorsky’s shot was parried into the path of Neville but with the goal at her mercy the defender could only fire over the bar. 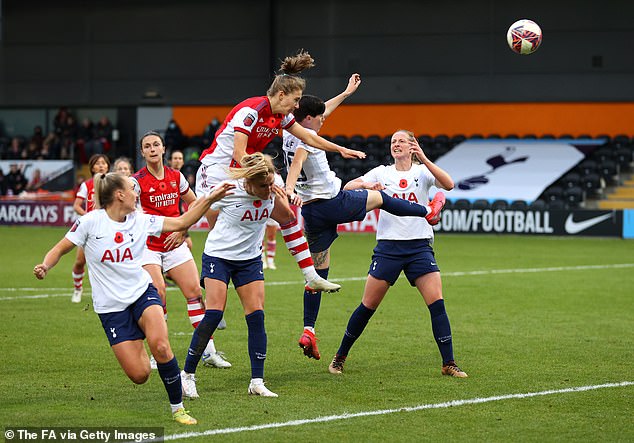 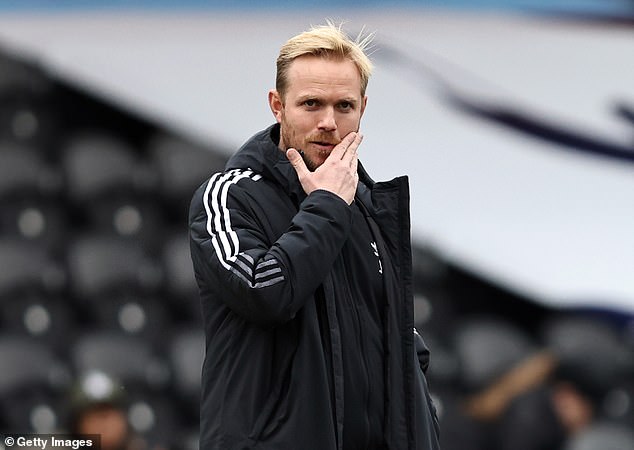 Simon then had a shot that whistled just past the post as Spurs looked for a second on the counter. But Arsenal were left furious when referee Amy Fearn pulled play back for a foul when Jordan Nobbs was through on goal.

Tottenham continued to look dangerous on the break and Angela Addison had a shot that flew just wide in the 87th minute.

But there is only one person you want a chance to fall to when you’re in desperate need of a goal. In the second minute of stoppage time McCabe’s corner found the head of Miedema and finally the striker found the net.

There was a chance of Williamson to win it at the end but she could only put her header over the bar.

Spurs could have come away with three points had Neville not fired over at 1-0, but she and the rest of her team can be proud of their defensive efforts.