Last week Frank Lampard piled the misery on his former mentor Jose Mourinho. This week it was the turn of Nuno Espirito Santo who returned to haunt the Tottenham boss.

Wolverhampton Wanderers trailed twice at Spurs but fought back to take the points with goals by Matt Doherty, Diogo Jota and Raul Jimenez.

They are unbeaten in nine Premier League fixtures in London since promotion and climbed ahead of Mourinho’s team to move within three points of the top four. 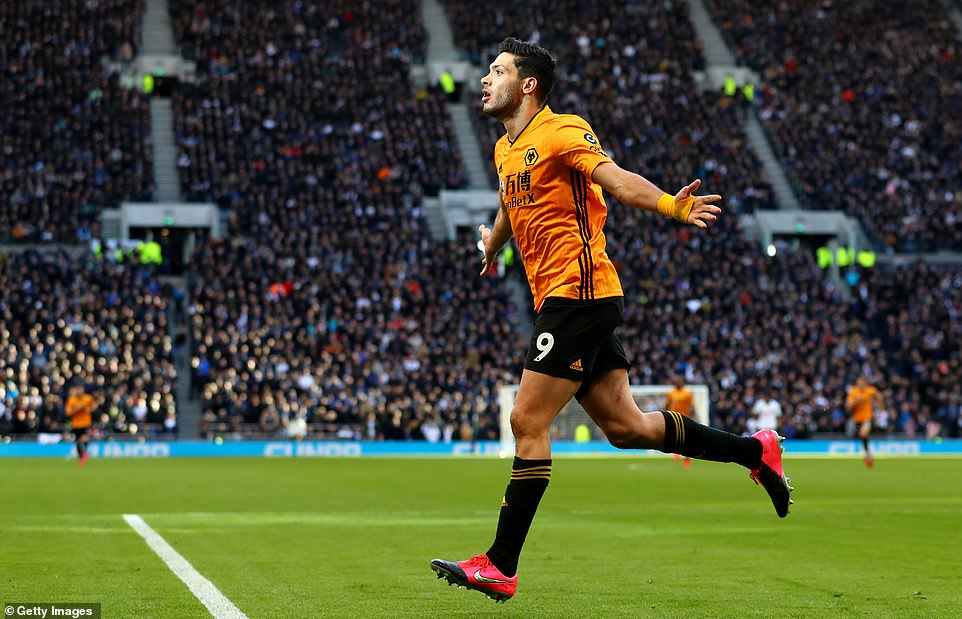 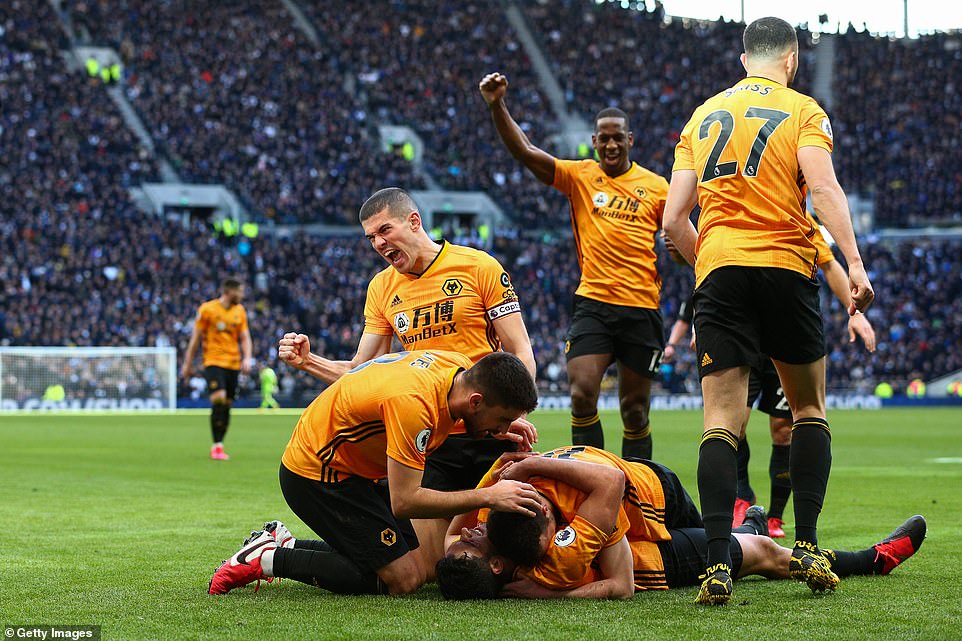 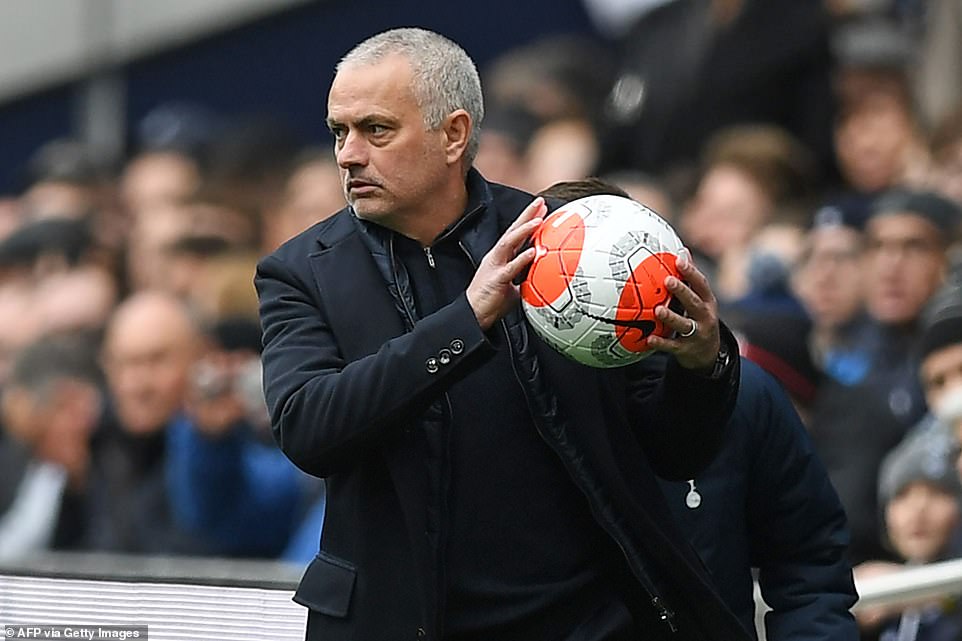 The scramble for the Champions League places is intensifying and Tottenham are floundering. They have lost three in a row. They have no fluency, damaged confidence and evidence of a plan is hard find.

Mourinho made big changes at the back without managing to look any more secure. All this despite taking an early lead through Steven Bergwijn. Rui Patricio saved the first attempt from Dele Alli but Bergwijn arrived to force the rebound into the net. It was his second goal in five games since his £27million move from PSV Eindhoven.

Tottenham had the lead but Mourinho cut an agitated figure on the touchline as Wolves exposed familiar weaknesses in his defensive unit. 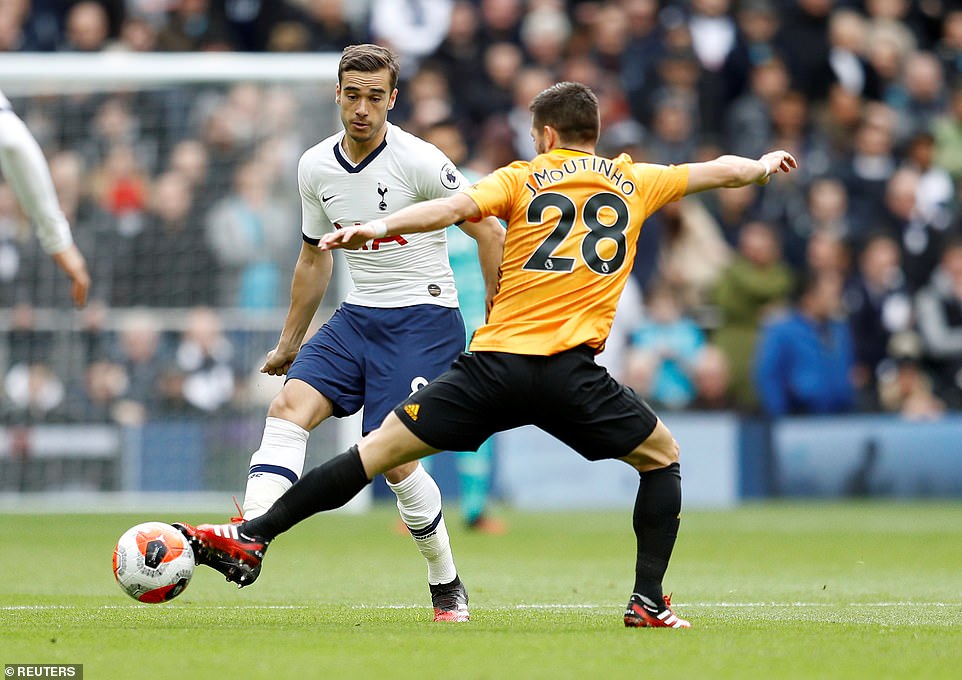 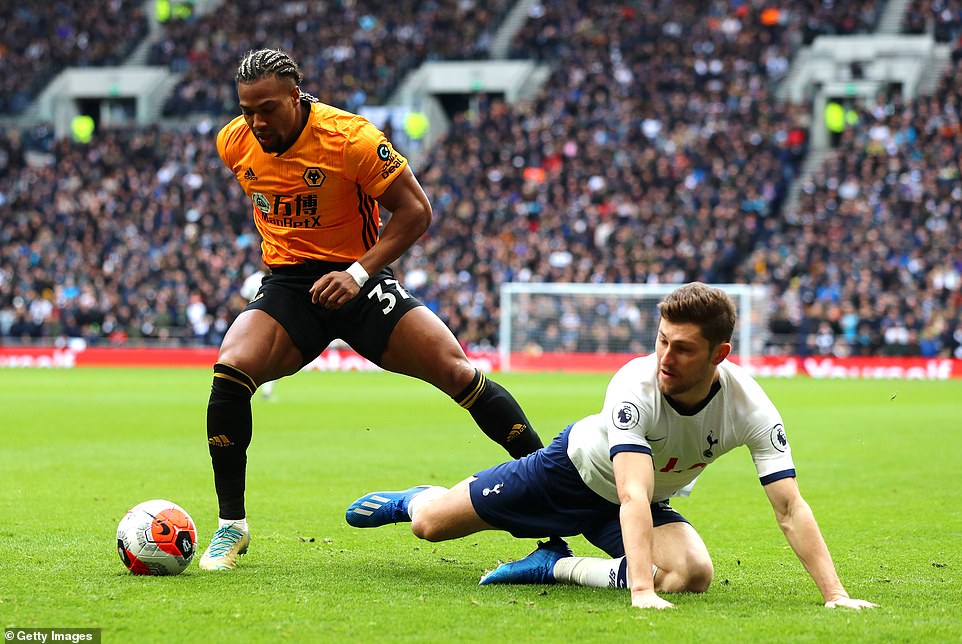 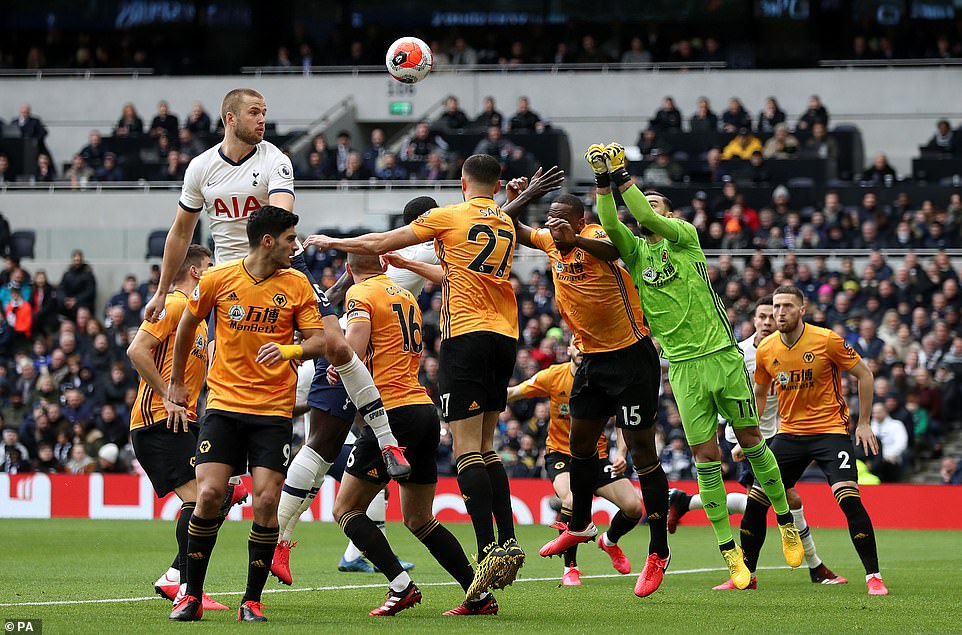 There was no Hugo Lloris, ruled out by a groin injury, and experienced Belgians Toby Alderweireld and Jan Vertonghen started on the bench.

Diogo Jota, who revelled in the space behind Aurier, flashed a warning shot over from the edge of the penalty area before the visitors equalised.

The goal created by one wing-back and converted by the other but the passage of play was littered with errors by the Spurs defenders. 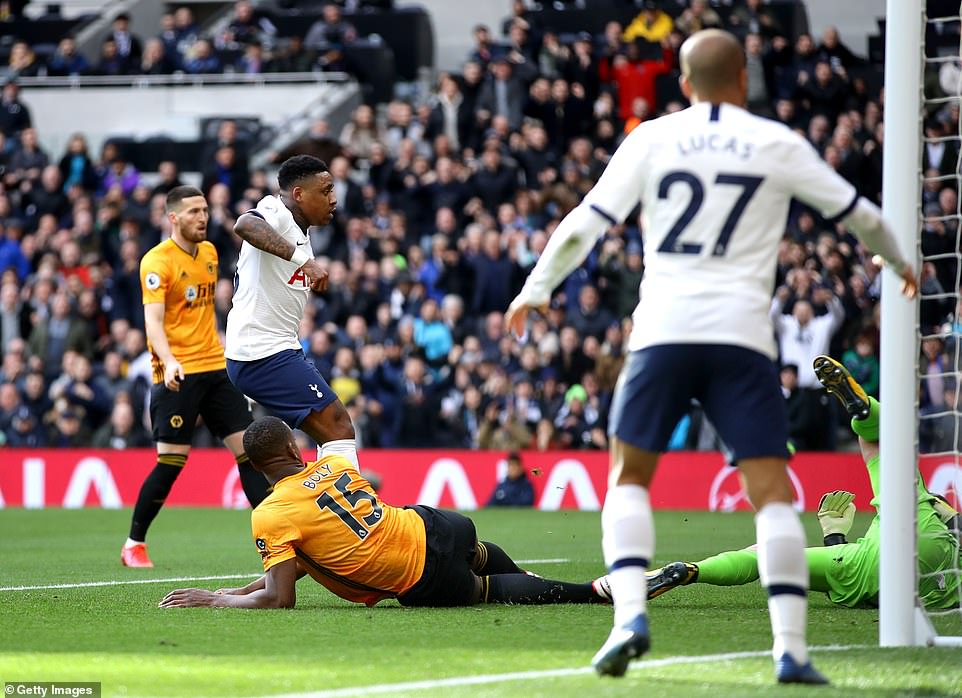 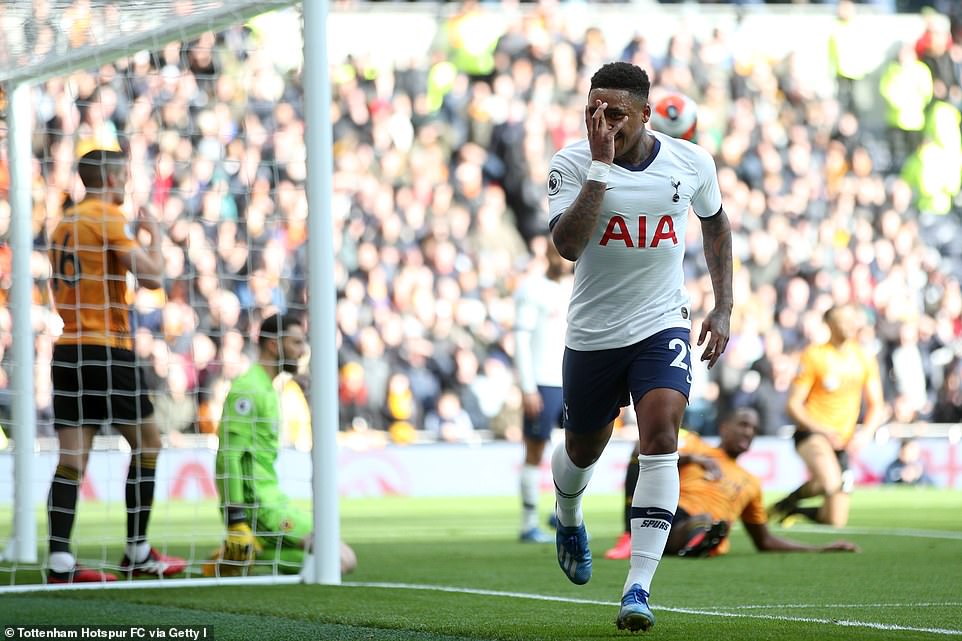 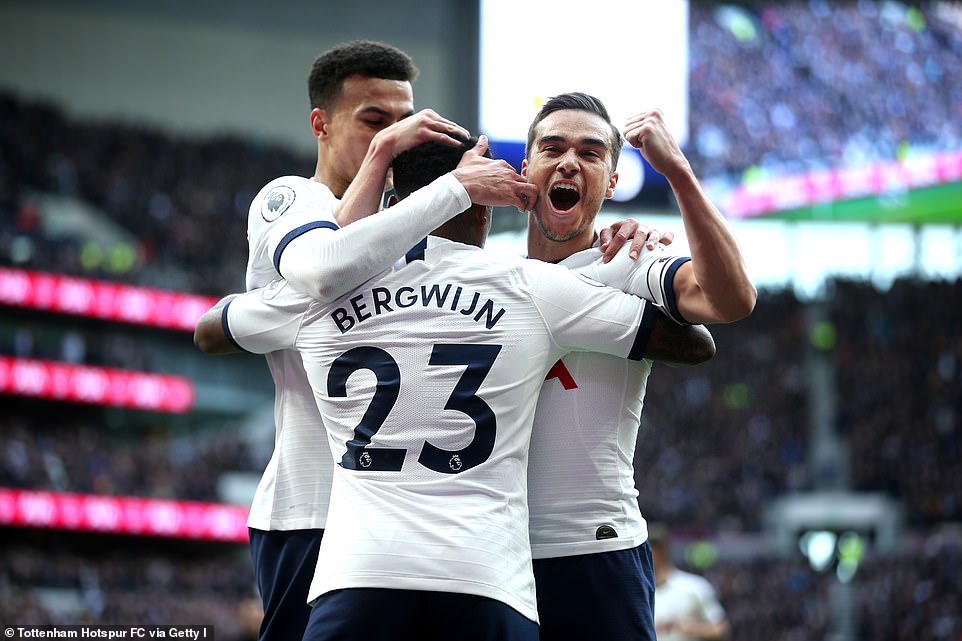 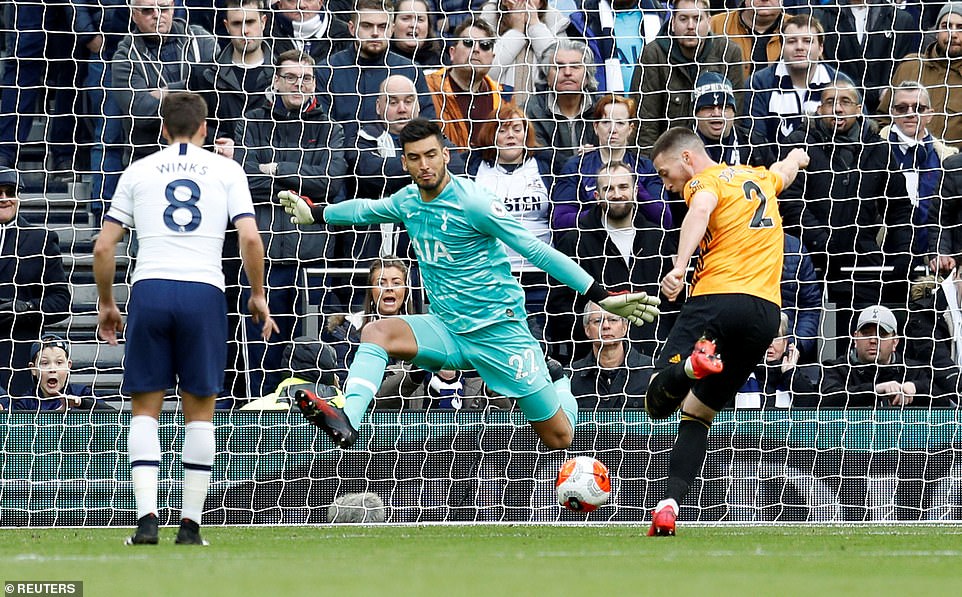 Jota skipped ahead of Davinson Sanchez on halfway to release Ruben Vinagre with a flick. Vinagre forged down his flank and delivered a low cross which evaded Eric Dier and was blocked by Japhet Tanganga. But his heavy touch only served up the chance for Doherty to slam the ball low past Paulo Gazzaniga.

Wolves continued to dominate until the momentum twisted moments before the interval. Willy Boly blocked from Ben Davies and another overhead effort by Alli flew straight into the hands of Patricio.

Spurs kept the pressure on and reclaimed the lead in the next attack, a move left to right through Alli and capped by a fabulous finish. Serge Aurier cut inside onto his left foot and beat Patricio with a fierce drive which curled inside the post. It was his first goal in the Premier League for nearly two years. 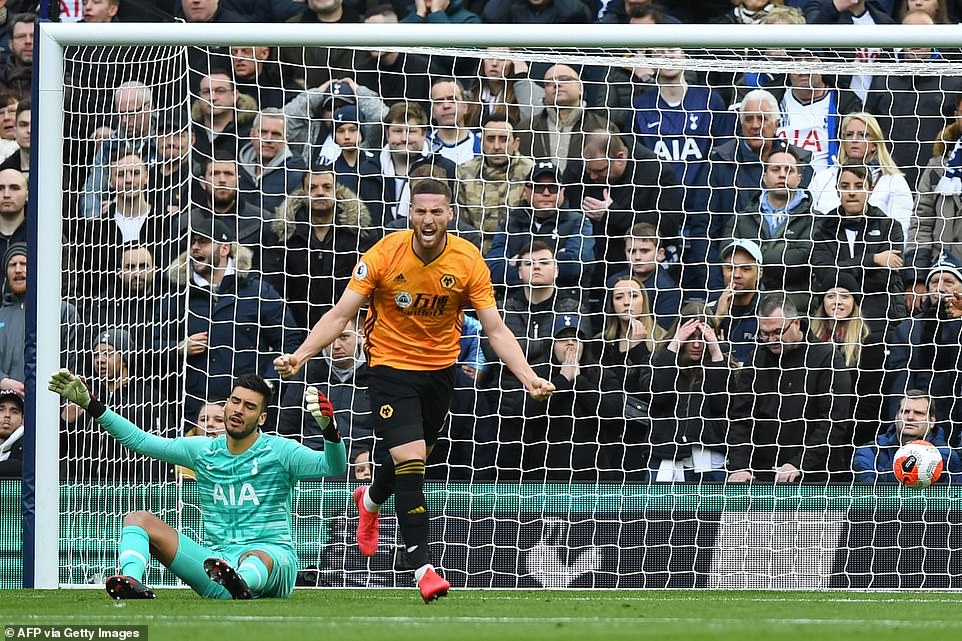 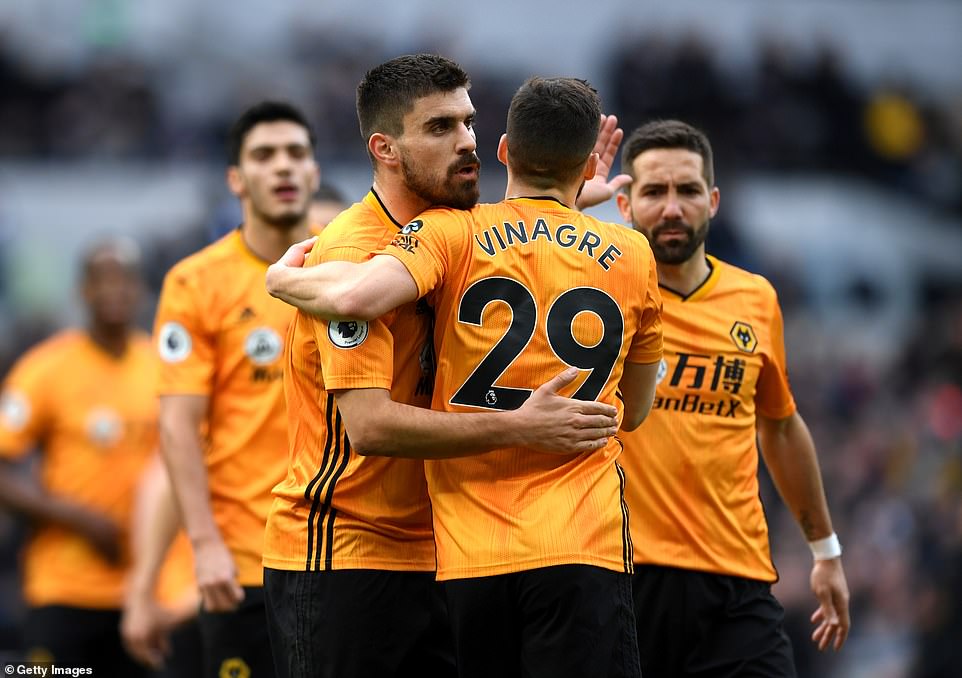 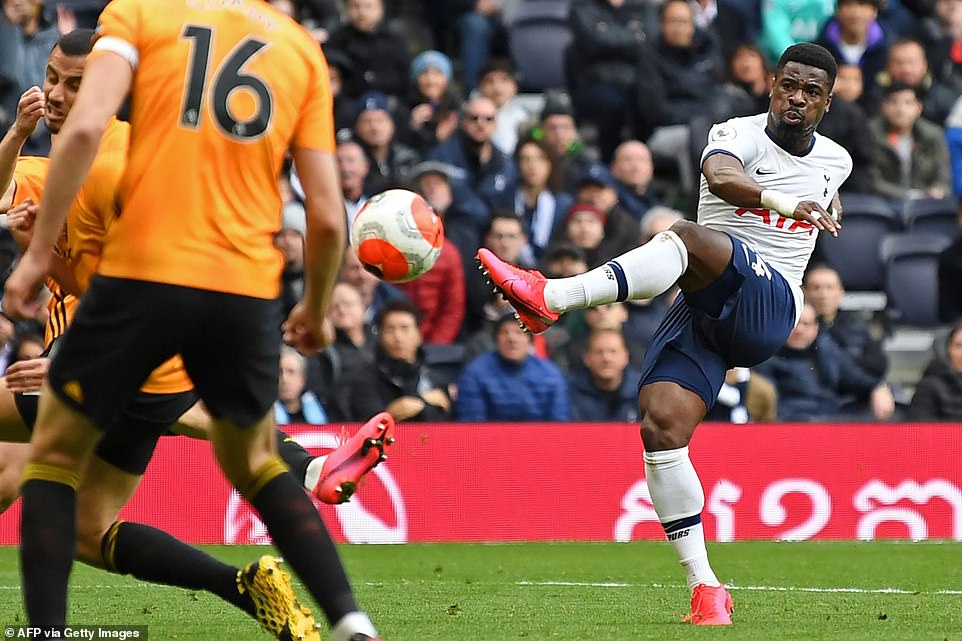 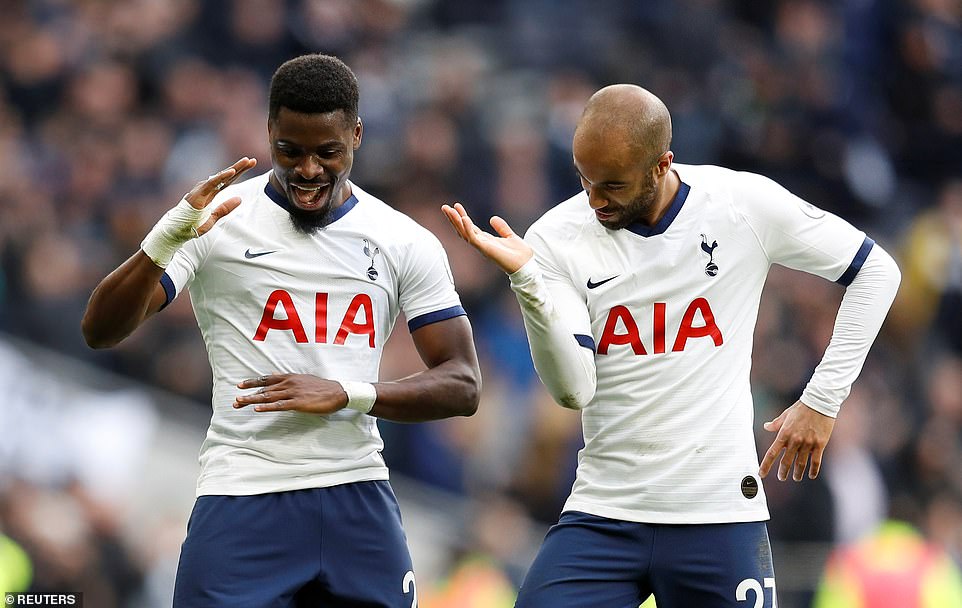 The home fans are treated to an entertaining dance between Aurier and Lucas Moura, who both played together for PSG 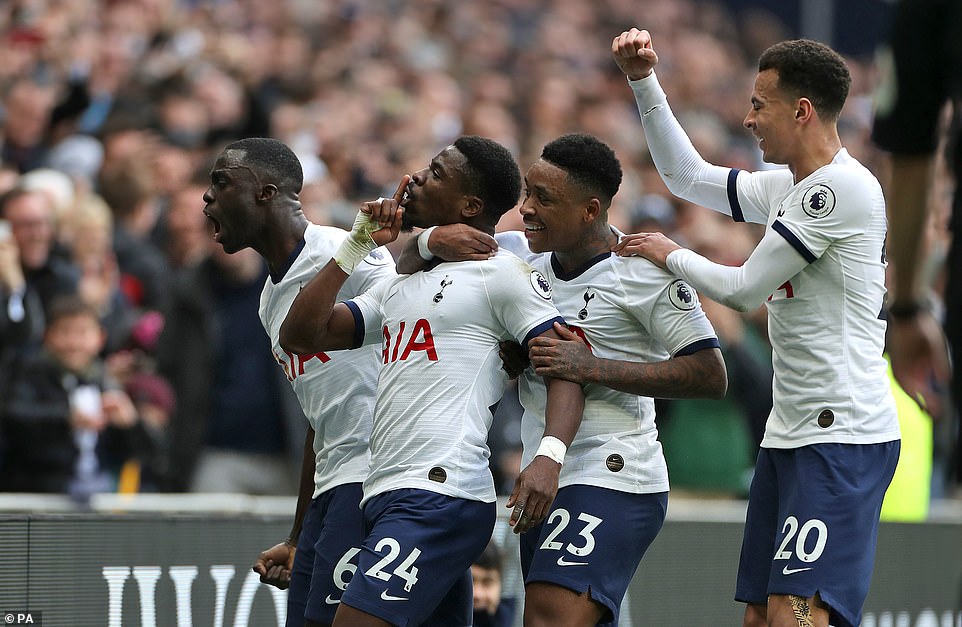 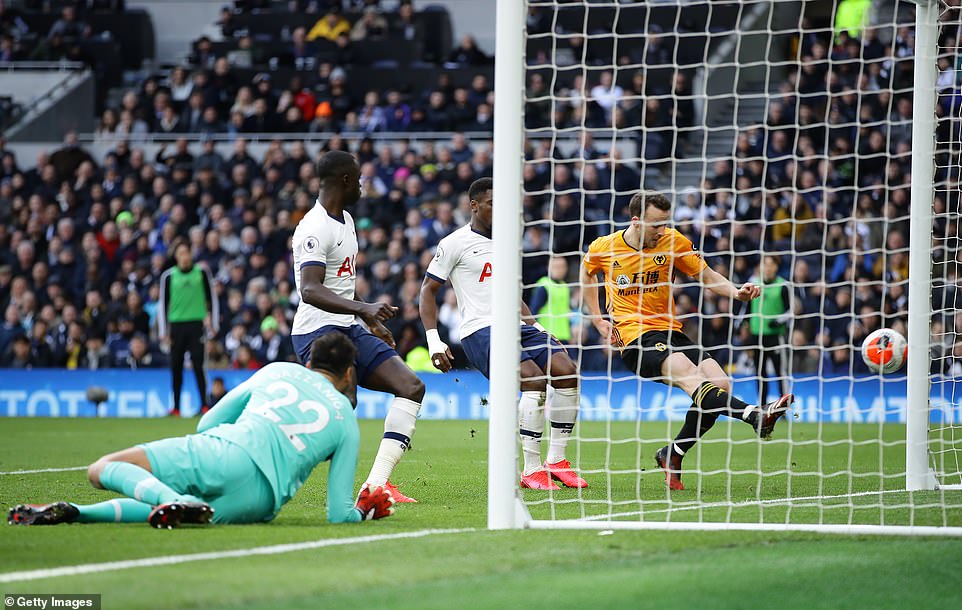 Tottenham had the edge and might have extended the lead when Alli escaped his marker to get on the end of a cross by Davies. His header flashed wide, Mourinho threw up his arms in anguish and Wolves were soon back on level terms. Once more, the Spurs defence was opened up with ease.

Adama Traore rode a challenge by Tanganga, advanced and found Jimenez who set Doherty charging forward again on the right. Doherty drove the ball low and hard towards the far post and whether it was intended as a shot, it caused problems.

Gazzaniga who stuck out a boot and his touch took the pace from the ball and presented Jota with the simple task of finding the empty net.

The winner came in the 73rd minute, created by Jota, dancing his way out of midfield and finding Jimenez, who jinked past Tanganga before firing beating Gazzaniga with a powerful strike with his left foot.

Traore was forced off after another problem with his shoulder but the visitors survived without too much alarm and deserved their victory. 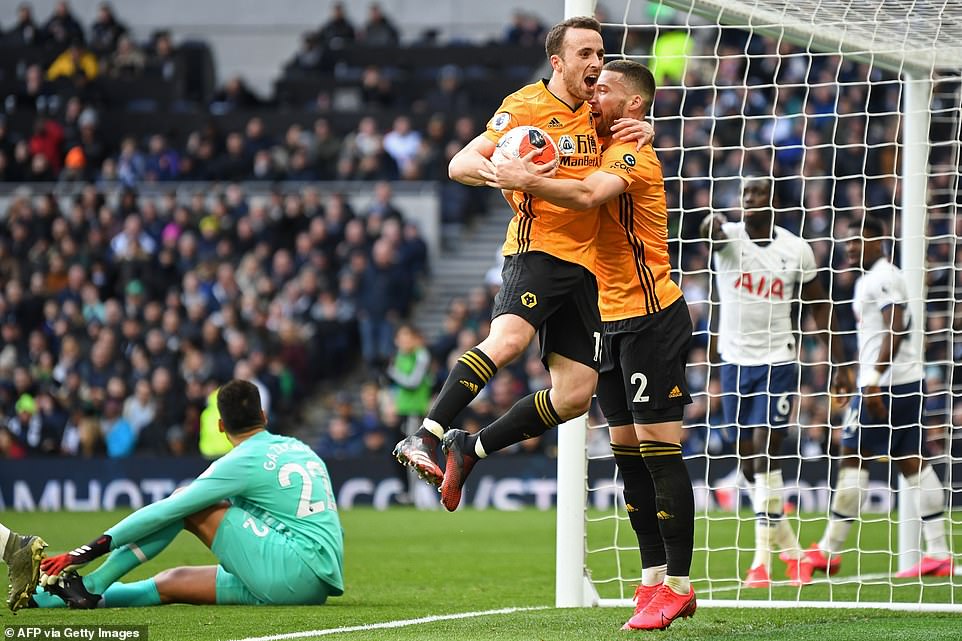 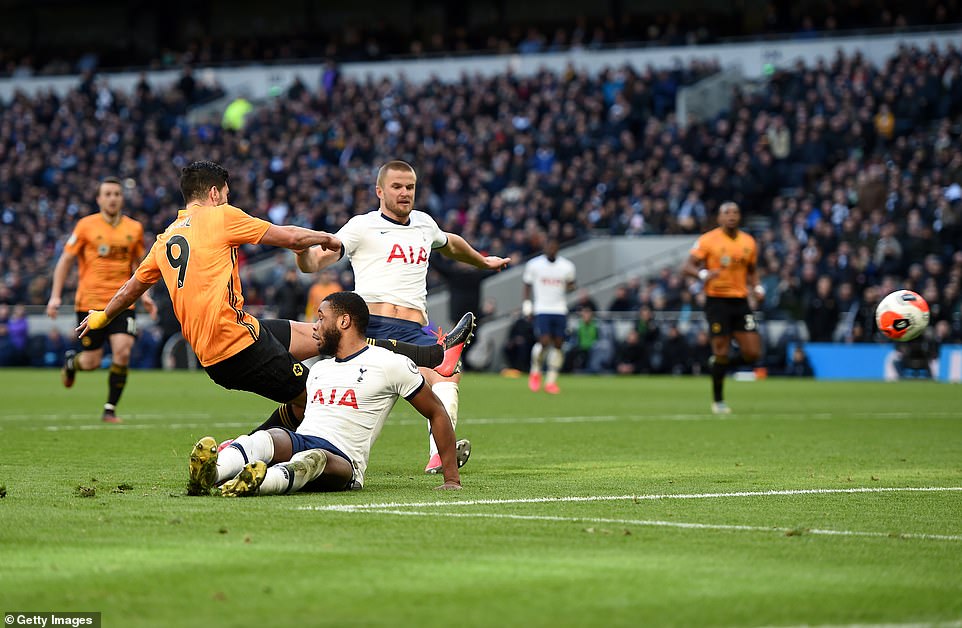 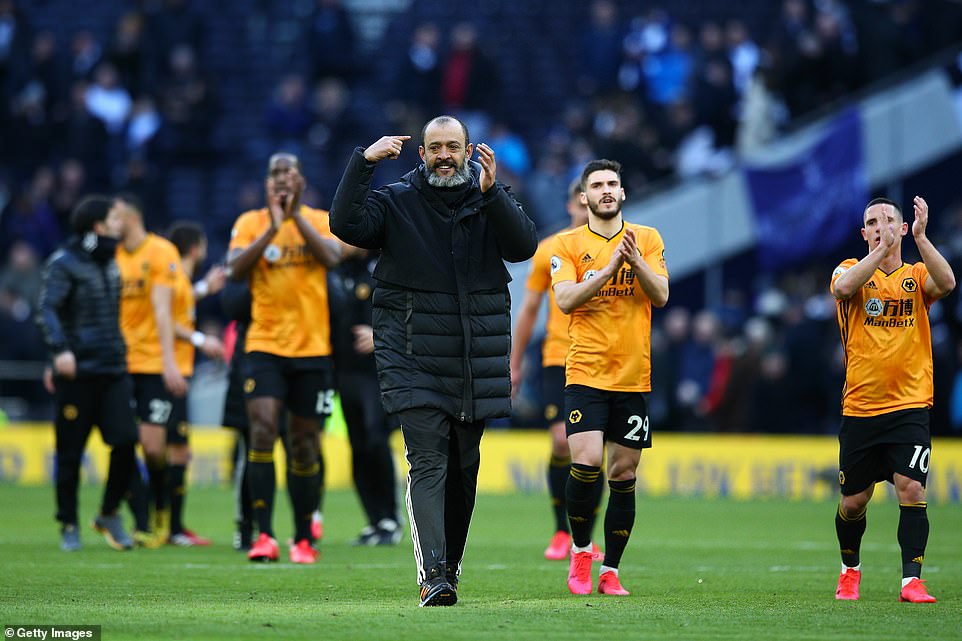