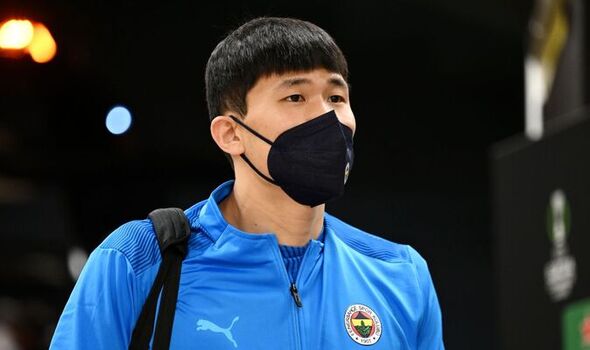 Reports in Turkey claim Fenerbahce defender Kim Min-jae is ‘travelling to England’ after Tottenham and Everton tabled bids for the defender. The highly-rated South Korean international signed for the Super Lig giants last August from Beijing Guoan in a deal worth an estimated £2.5million.

The 25-year-old was one of the division’s best players last season and now looks destined to move on after less than a year in Istanbul.

Prior to his arrival in Turkey, Spurs were among the clubs to have monitored his development in the Far East.

His international team-mate Son Heung-min has sung the centre-back’s praises on more than one occasion, alerting the north London club to one of his country’s finest talents.

According to Turkish newspaper Sabah, the defender is now set to travel to England to complete a move to the Premier League.

It’s claimed both Spurs and Everton have tabled offers for the versatile defender, who can also play at full-back.

Interestingly, the report suggests the offers from England are worth over £17m – a figure likely to entice Fenerbahce into a sale.

The Turkish outfit are reluctant to lose their star defender but know a sale could fund a whole summer of transfer business.

Min-jae is allegedly set to decide his future in the coming days, although the arrival of new manager Jorge Jesus could have an impact on his future.

The player, nicknamed ‘The Monster’ in his homeland has also recently been completing national service.

Spurs are currently on the lookout for a new left-sided centre-back to play alongside Eric Dier and Cristian Romero.

Inter Milan’s Alessandro Bastoni is the club’s top target and an offer could arrive in the coming months.

Tottenham are aware that it may take some convincing to land the player, though.

Bastoni remains committed to Inter and although he would like to reunite with Antonio Conte one day, he’s in no rush to leave the Italian giants.

Meanwhile, Everton are keen to improve their squad across the board following a dismal season that saw them become engulfed in a relegation dog-fight.

Now Frank Lampard will be looking to put his own spin on the squad to drive the Toffees up the table.

Given his valuation, Min-jae represents an attainable asset for Everton, although it’s unclear whether the reported interest from Turkey is genuine at this stage.