England’s attempt to exact World Cup revenge on the United States fell flat as they were outplayed by the world champions in a 2-0 defeat in their SheBelieves Cup opener in Orlando.

The Lionesses, who won the competition for the first time last year, struggled once again to compete with their long-standing foes who scored twice in two minutes to pile pressure on Phil Neville.

Christian Press, who headed the Americans to World Cup victory in Lyon, scored the opener before Carli Lloyd wrapped up the win with her 123rd international goal to consign the Lionesses to their first defeat of the year.

And just like that fateful night back in July, it was all USA in the opening stages as Lloyd and Rose Lavelle both tested Carly Telford early with the Lionesses struggling for control under pressure early on.

England’s first chance came from nowhere when Keira Walsh lifted the ball into the box for Nikita Parris but after taking the ball down beautifully, the winger headed directly at Alyssa Naeher before the lineswoman ruled her offside.

Somehow the USA had nothing to show for their efforts despite dominating the first half of action, Telford coming to England’s rescue again when she smothered a one-on-one effort from Lindsey Horan.

The Lionesses rode their luck in the first half and breathed a sigh of relief to go in goalless at the break, especially after the USA saw their penalty shout turned down when Tobin Heath was taken down by Greenwood in the box, prompting jeers from all corners of the Exploria Stadium.

It came 43 minutes later than it did in Lyon but once again it was Press, who scored five goals in Olympic qualifying, who gave the Americans the lead against England as she cut in from the left to curl into the top right corner from 25 yards out.

It wasn’t all World Cup déjà vu though as instead of seeing an Ellen White equaliser, the Lionesses found themselves fighting a 2-0 deficit just a matter of minutes later. 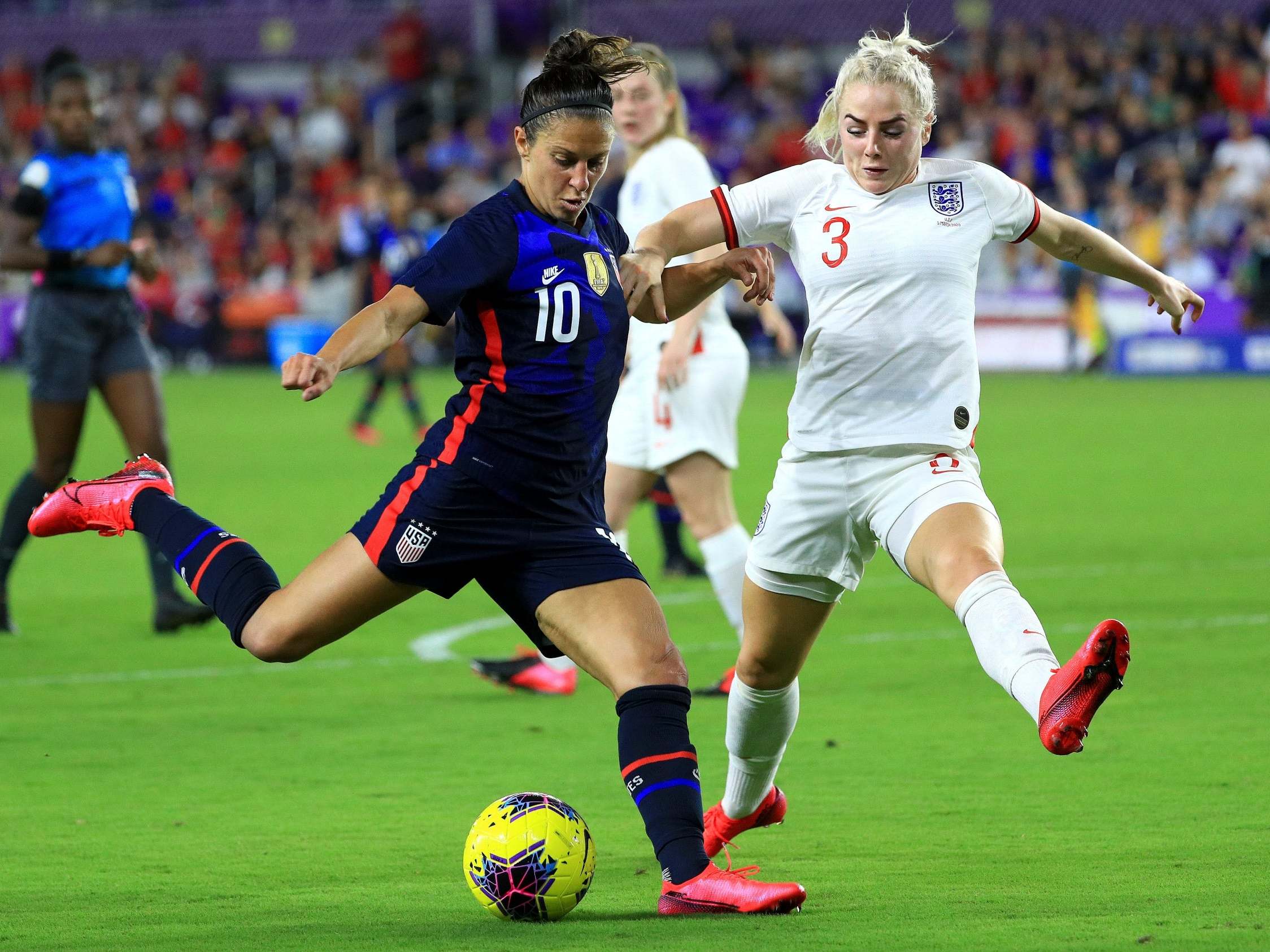 The Americans doubled their lead on 55 minutes through Lloyd, who ran onto a perfectly lifted ball from Horan to scoop over Telford, England’s backline in no man’s land to deal with her run.

For an England side struggling for cohesion at both ends, the bright spark of the evening was without a doubt Hemp, who on her starting eleven debut, consistently caused trouble for the experienced Kelly O’Hara down the right flank.

Jordan Nobbs, Toni Duggan and the in-form Bethany England were brought on by Phil Neville to help provide more attacking impetus for Hemp, but no matter what the Lionesses did going forward they continued to struggle with the pace of the USA frontline, Lloyd almost making it three when she blazed over the bar.

Julie Ertz, making her 100th international appearance, thought she’d wrapped up the win in Orlando when she thumped a superb strike from a tight angle into the back of the net, but the USA midfielder was denied by the offside flag.

The introduction of Chloe Kelly couldn’t change England’s fortunes as shaky defending and a lack of ruthless edge in front of goal once again cost the Lionesses as the World Cup semi-final rematch reached the same conclusion of a dominant US victory.