Virgil van Dijk, Fabinho and Curtis Jones return to training for Liverpool as their Covid isolation comes to an end… handing Jurgen Klopp a major boost ahead of next week’s trip to Leicester

Liverpool trio Virgil van Dijk, Fabinho and Curtis Jones all rejoined the squad for training on Christmas Eve after their Covid-19 isolation came to an end.

All three have been out since missing the 3-1 win over Newcastle on December 16 having tested positive but were pictured back with their team-mates.

The postponement of Liverpool’s Boxing Day match due to coronavirus issues within the Leeds squad gives those players additional time to get back up to speed before the trip to Leicester on December 28. 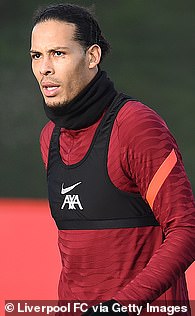 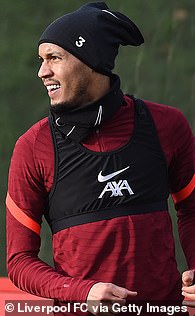 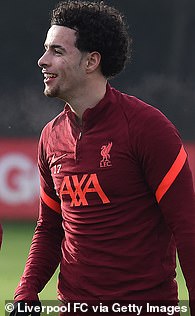 Virgil van Dijk, Fabinho and Curtis Jones are back in Liverpool training after Covid-19 isolation

Midfielder Thiago Alcantara is unlikely to feature at the King Power as he remains in isolation, while the knock-on effect of rescheduling the Leeds match means left-back Andy Robertson will now miss the January 2 clash at Chelsea as he will be serving the final match of his three-game ban for a red card at Tottenham last weekend.

The fixtures are piling up for Liverpool, with a two-legged Carabao Cup semi-final against Arsenal also to come in the new year.

The two sides will go head to head in the weeks beginning January 3 and 10 for a place in the Wembley final, but Jurgen Klopp believes two legs provides an unnecessary threat to player welfare. 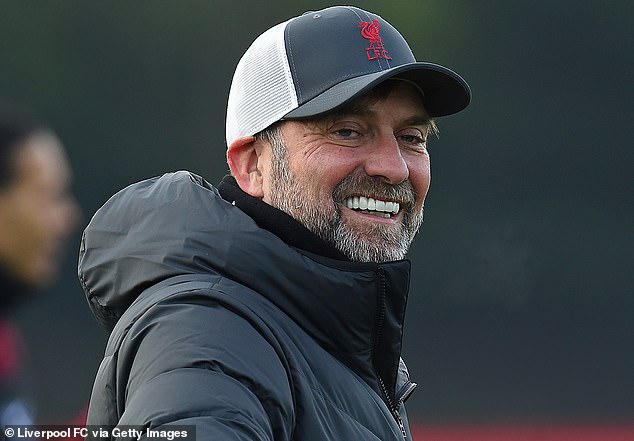 ‘I don’t just speak about player welfare this year, I have been speaking about it for six years or maybe longer,’ said Klopp.

‘If the things I say would help more, I would say it much more often. But it doesn’t help.

‘The only thing I do with these messages is I create headlines. They never arrive at the right places.

‘Tomorrow (Thursday) we have a meeting at 4pm but it’s with the Premier League and not with the EFL, I’m not sure if they are involved or not.

‘I said it before, I would prefer only one semi-final. But I can’t see any kind of changes actually.’