He can’t cop Vegemite, but Socceroo Harry Souttar is eagerly anticipating his first taste of Australia’s greatest football rivalry as his fondness for his adopted nation continues to grow.

Souttar has only been to Australia once before – the same trip in which he made his international debut in 2019 – but is acutely aware of what Tuesday night’s clash with Japan means, both in historic terms and in the context of the team’s bid to reach next year’s World Cup in Qatar.

It’s been more than a decade since the Socceroos last beat the Samurai Blue – in a 2-1 qualifying victory at the MCG under the late Pim Verbeek – but they’ve never been able to beat them on Japanese soil in nine attempts stretching all the way back to 1994.

They may never get a better opportunity to break that drought, with Japan under extreme pressure after losing two of their first three matches in the final round of Asian qualifiers for Qatar 2022.

Reports from Japan indicate that if they fail to beat the Socceroos at Saitama Stadium, it could cost coach Hajime Moriyasu his job.

Even a point would be enough to seriously boost Australia’s chances of reaching the World Cup having notched a world-record 11 consecutive wins in qualifiers to sit equal-top of Group B, with three home fixtures still to come. 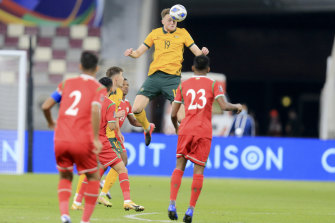 Harry Souttar connects with a header during Australia’s win over Oman.Credit:AP

Asked if it was time the Socceroos finally got back on Japan, Souttar said: “I think so.”

“We’re aware of their form. There’s pressure on them. We’ve seen the results they’ve had. But us as a group, we put pressure on ourselves. We drive ourselves forward.

“We’ve got 11 wins and obviously it’s a record but we want to go for 12. We’re not happy with 11, we’re always looking for the next one. And one of the big key messages in this campaign stage has been take it game by game. That’s one of the reasons why we’ve done so well.”

Souttar, 22, dismissed as “paper talk” speculation that English Premier League sides Everton and Tottenham Hotspur are considering a bid for him, having been impressed by his consistent performances in the heart of defence for second-tier Stoke City.

Born and raised in Aberdeen but with an Australian mother, Souttar admits he is starting to feel a stronger connection to the green and gold – especially after spending so much time in hubs with the Socceroos and the Olyroos, whom he represented in Tokyo earlier this year.

“I’d been around the staff and the players for almost two-and-a-half months. It felt like that was your life, your home,” he said.

“To be going away from that was really strange. I’ve probably been with the staff and players more than I have my family for the last four months. I love coming away – we’re not in Australia at the moment, hopefully that can be changed sooner rather than later and we get to play in front of the fans again.”

As for his take on Vegemite, it was Socceroos teammate Rhyan Grant who supplied the highly divisive yeast concoction for him to sample at an earlier camp, as is generally the custom for any foreigners who come into orbit with Aussies.

Souttar was not impressed. “Not a fan,” he said.

Indeed, it’s his knowledge of Scottish football that might come in most handy for the Socceroos this week. Souttar keeps a close eye on the league in his homeland, where his brother John plays for Hearts, and where Japanese star Kyogo Furuhashi has been tearing it up for Ange Postecoglou’s Celtic.

Kyogo has only just recovered from injury, but played half an hour in Japan’s 1-0 loss to Saudi Arabia last week, and looms as an obvious starting candidate if Moriyasu looks to shake things up amid their form slump – and a seriously dangerous player if he hits his peak.

“I do watch the league as much as I can and keep up with results. [Kyogo] has had a good start,” Souttar said. “He’s a different type of striker to someone I’d normally face in the Championship, but we know he’s a good player – they’ve got good players all over the park, and so will we. Hopefully it’ll make a great spectacle.”