West Brom 1-2 Brighton (AET): Visitors through to FA Cup fourth round with a hard-fought win, as Neal Maupay’s extra-time goal helps Graham Potter’s side to victory against 10-man hosts

Breaking point was found, at last. Ninety-eight minutes in and hammering on a door manned by only 10, Brighton would not be denied any longer.

Jakub Moder, the game’s best player despite missing its first two thirds, burst free down the right. He fired the ball towards Leandro Trossard, who saw team-mate Neal Maupay in his rear-view mirror and let the ball run. Maupay swung a leg, broke the resistance and sent Graham Potter’s side into the fourth round.

‘It was important for us to go through today,’ said Potter. ‘As you can see from the results in this competition, it’s not straightforward.’ 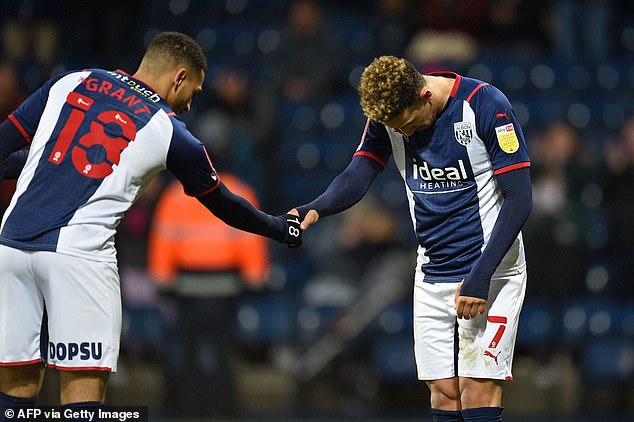 Callum Robinson (R) netted the opening goal of the tie, flicking home after a counter-attack 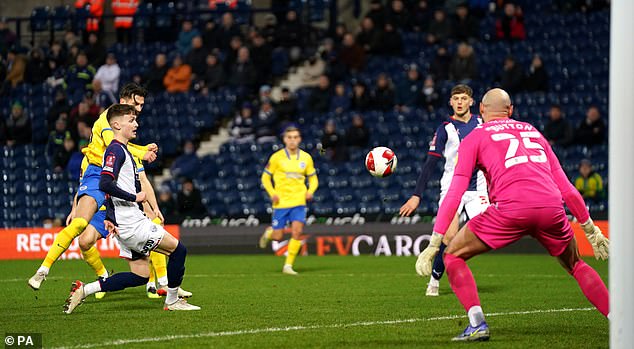 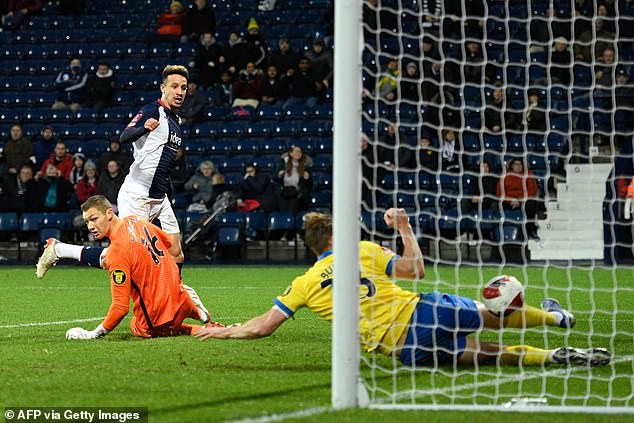 That West Brom had got to the eighth minute of extra time was a testament to a brilliant display from goalkeeper David Button and a familiar story of Brighton’s wastefulness.

This latest chapter told of two missed one-on-ones, a collection of pot shots and a miss from Shane Duffy that would strain the imagination of most fairytales.

But the twist came via a helping hand from Cedric Kipre, whose two yellow cards in as many minutes midway through the second half proved too much to bear for a West Brom side already hampered by injuries and suspensions. 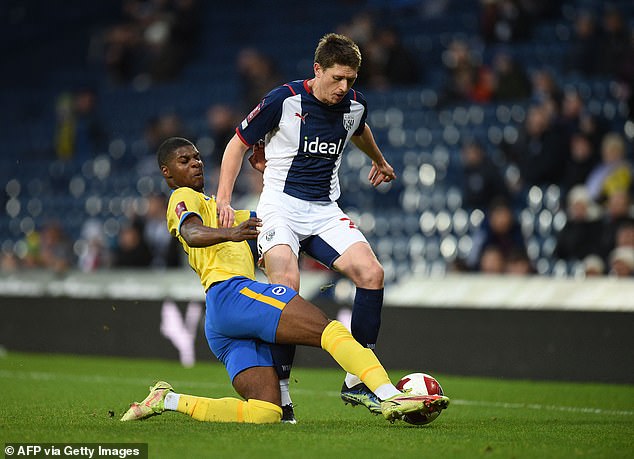 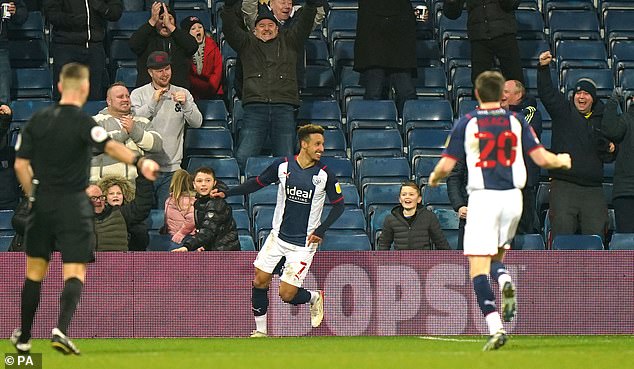 They had been warned in the first half, needing two excellent saves from their former Brighton ‘keeper Button to deny Danny Welbeck and Maupay when clean through. Welbeck had attempted a lob only to find Button’s shoulder, while Maupay went low and brought a one-handed save.

The profligacy was punished immediately after the break, as Matt Phillips’ flick-on caught Dan Burn flat-footed and Karlan Grant burst into the box before squaring to Robinson.

The Irishman was confronted by the 6ft 8in frame of onrushing debutant Kjell Scherpen, but kept his composure to poke in the opener from six yards.

Valerien Ismael’s side were good value for their lead, but in minutes 68 and 69 Kipre clattered into Maupay and Trossard respectively and was sent on his way.

‘Up to the red card we played perfectly against a strong side,’ said Ismael. ‘The red was the game-changer. It’s the same story week in week out – we’re on top, have the possibility to change the game and we punish ourselves.’ 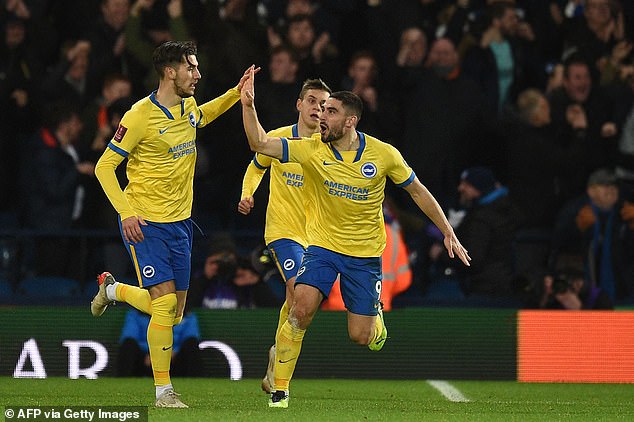 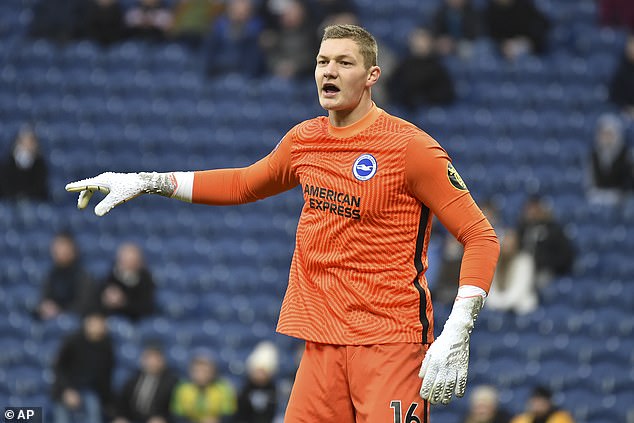 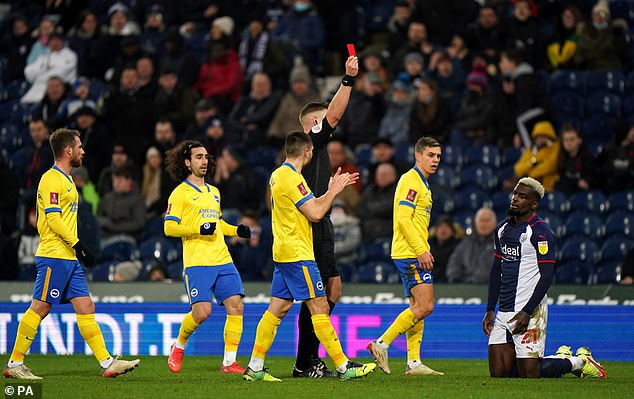 Within seconds the extra man was telling, as a free-kick was whipped onto the right foot of the unmarked Shane Duffy on the six-yard line.

But the centre back was probably wishing it had been at head height shortly afterwards, as he stuck out a boot and saw the ball spoon over the bar.

Potter, who had made seven changes to rest a side pushing for a top half place in the Premier League, brought on Moder and 17-year-old Ewan Ferguson.

Five minutes after lining up on the touchline together, they were meeting again in celebration.

Ferguson diverted a pass into Moder’s path and the Pole smashed the ball past Button. With the equaliser, West Brom’s 10 tired men were forced into something they could not afford – 30 more minutes. Maupay only needed eight. 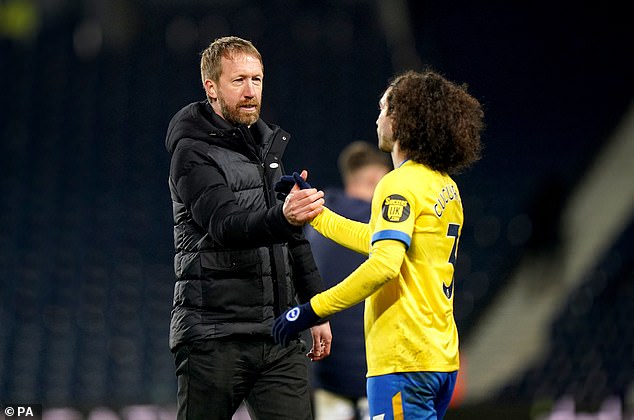 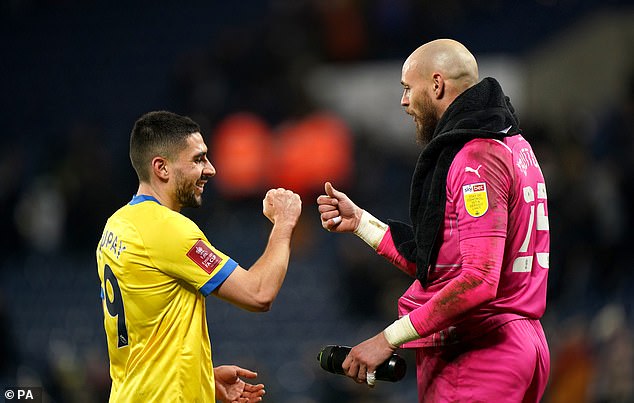