Declan Rice after scoring the opening goal on Thursday night

For the tens of thousands of West Ham fans descending upon the London Stadium, filtering into the bars around Stratford and through the streets around Westfield, this was where the club’s European campaign really began.

That is not to dismiss the team’s professional dispatching of Dinamo Zagreb in Croatia a fortnight ago, but Thursday evening marked the first time the Hammers’ Europa League venture breathed in east London air.

While home supporters heaved upon the stadium’s entrances well before kick-off, Rapid Vienna fans bustled in the back way. Confined to a small corner of the vast London Stadium, their expressions softened and gave way to song as Vienna players skipped onto the turf before them. Those same faces hardened at the emergence of Mark Noble and his Cockney cohort, as well as mascots Bubbles the bear and Hammerhead – all of whom were heralded with jeers.

West Ham are in the Europa League. The same was true on the final day of last season, the first of this campaign and two weeks ago in the Croatian capital. It was true on each of those occasions, but only now is it real.

The deafening roar upon the first whistle confirmed it, with the next notable noise to echo around the ground being a sarcastic cheer from home fans as Ercan Kara lobbed a half-volley over Alphonse Areola’s goal in the second minute – the Vienna striker failing to capitalise after Issa Diop’s misjudgement of a long ball forward.

Over the course of these 90 minutes, it became increasingly hard to argue that such sound has been generated by West Ham fans since the move to the London Stadium five years ago, as their anticipation repeatedly rose then cascaded along with the rain. It was the case when Declan Rice hit the post with a flicked header from a free-kick in the first 10 minutes, when Diop failed to convert the rebound, and when Michail Antonio’s close-range effort was blocked superbly moments later.

Each set-piece won would achieve applause, each cross denied would draw a collective sigh. Even the apathy was illogically intense when Taxiarchis Fountas slid a tame shot into Areola’s gloves, in one of Vienna’s few first-half chances.

When Aaron Cresswell whipped a corner past whistling Vienna fans and onto the head of Craig Dawson later in the half, the defender’s effort striking the upright, it felt like the home supporters were on the verge of erupting. 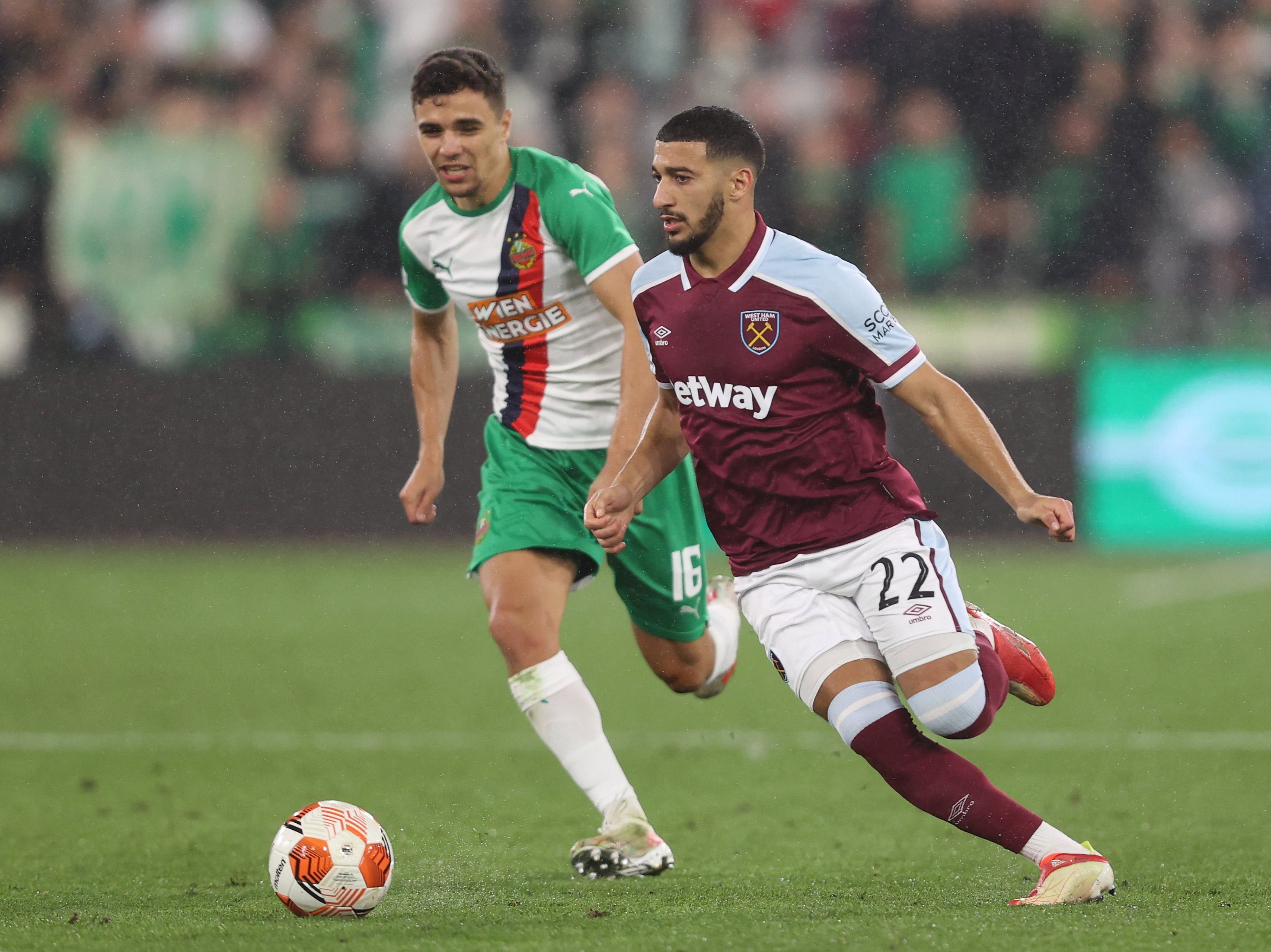 A matter of minutes later, they would do just that. Andriy Yarmolenko clipped a ball for Antonio to chest down in the Vienna box, and the forward’s cutback across goal reached Rice, who tapped in the opener.

The England midfielder, celebrating his second goal in as many European games, sprinted past the away section with a swagger and slid on his knees towards the nearest home fans, who moments later would trade missiles with the Vienna supporters.

As half-time crept closer, a lull in the action defused tensions, which remained restrained as Vienna gained a greater foothold in the game after the break. Both managers made triple-changes on the hour mark, with David Moyes replacing Mark Noble with Tomas Soucek, Nikola Vlasic with Manuel Lanzini, and Antonio with Jarrod Bowen.

The latter was immediately involved, surging through the visitors’ back line before Vienna goalkeeper Paul Gartler beat the West Ham forward to a loose ball. Still, the home side seemed more unsettled by the slew of substitutions than their visitors, who quickly carved an encouraging opening for winger Kelvin Arase, whose shot was blocked.

Soon thereafter, it was Vienna substitute Marco Grull who skipped past Ben Johnson in the hosts’ box but appeared to feign contact to win a penalty, which was overturned by VAR to another huge roar from the home fans.

The incident threatened to reignite the antagonism between the Vienna supporters and their closest counterparts, but the arrival of Pablo Fornals in place of Yarmolenko attracted the attention of those in claret and blue, who welcomed the Spaniard’s entrance with another of the night’s great cheers.

Fornals soon sent Bowen through one-on-one with a perfectly-timed ball from the outside of his boot, but the forward rounded Gartler the wrong way and was forced wide enough to blast a shot over. Even then, the 24-year-old should have scored.

Dietmar Kuhbauer’s relieved team quickly resumed their pursuit of an equaliser with 10 minutes remaining, but this increasingly assured West Ham side retained composure before adding a second goal at the end of five minutes of stoppage time.

It was Said Benrahma who tucked a finish across Gartler and into the bottom corner to add a 2-0 win to the Hammers’ 2-0 victory over Zagreb.

That game should have felt like an occasion but couldn’t, owing to the reduced crowd in Croatia and the clinical nature of West Ham’s win. This, though, was an event.

The victory leaves Moyes’s side sitting comfortably atop Group H, and the bigger picture depicts three straight wins across all competitions – one in the Carabao Cup, one in the Premier League and one in the Europa League.

Earlier in the day, a statue was unveiled outside the London Stadium to honour Bobby Moore, Geoff Hurst and Martin Peters for their roles in West Ham’s 1965 European Cup Winners’ Cup triumph.

The club is still seeking its first significant success around the continent since that campaign 56 years ago, and there is a long way to go for Moyes and his players. But whether or not silverware awaits at the end of this journey, it is rapidly becoming an adventure.