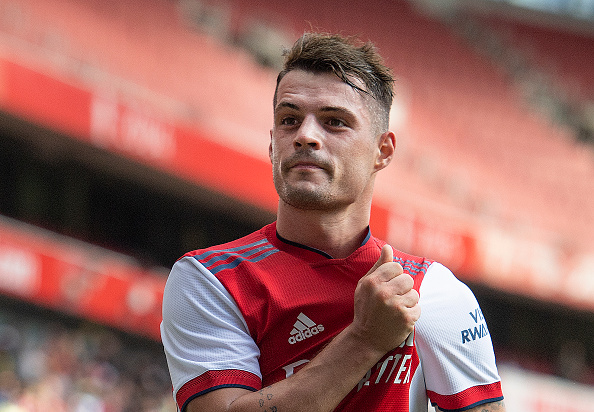 Granit Xhaka admitted it felt good to be back at ‘home’ after his return to Arsenal’s starting line-up for the side’s friendly defeat to Chelsea.

The Switzerland international was making his first appearance of pre-season as the Gunners were beaten by their rivals at the Emirates on Sunday.

Xhaka, who scored the Gunners’ only goal in the 2-1 loss, has been heavily linked with a move to Roma this summer.

Jose Mourinho has identified Xhaka as a priority target and has made little effort to disguise his desire to sign the former Borussia Monchengladbach midfielder.

But Mikel Arteta confirmed after the defeat that Arsenal’s intention is to keep Xhaka and that he will not be allowed to leave.

‘Granit is going to be staying with us,’ Arteta said after the defeat to Chelsea at the Emirates.

‘He’s a player that we value so much he’s a key member of our squad.

‘He wanted to play today and I think it’s very clear coming from his side that he wants to be here.’

And, taking to Instagram after the defeat, Xhaka appeared to echo Arteta’s words by referring to the Emirates as his ‘home’.

‘It felt really good to be home,’ wrote Xhaka.