The champion three-year-old stamped himself as Australian racing’s biggest star with Saturday’s dominant win at Flemington, where he was joined by a wall of horses at the top of the straight before he dashed away to win his maiden group 1 in elite style.

The rematch between he and Catalyst failed to live up to the expectation, such was Alligator Blood’s dominance on the big stage. 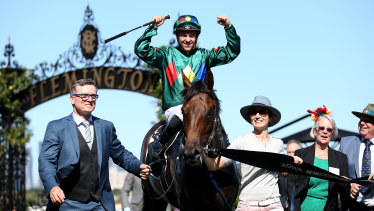 Even Alabama Express, a last-start group 1 winner, failed to keep up with the speed machine, who took his record to 10 wins from 11 career starts, his only blemish a second in the Caulfield Guineas four months ago.

"I felt Magic Millions was redemption but to win a group 1 like that is more than redemption; it’s a dream come true," Vandyke said.

"He’s been up since May with the longest break being nine days.

"He’s had a race or a trial every month since July last year and he’s got the audacity to put in his career best performance with that long drawn out preparation. I’ve got goose-bumps talking about the horse.

"It’s a group 1. It’s for the owners. It's for Queensland. It's for Australia. It’s just fantastic."

Jockey Ryan Maloney, who has endured sleepless nights after coming second on the horse in the Caulfield Guineas, also stamped his resume with a maiden group 1 victory.

"[Maloney] was in 100 per cent shape today and he deserved that. The owners hadn’t had a group 1, the horse hadn’t. That’s as good as it gets," Vandyke said.

"The world’s his oyster. He was softened up during certain stages of the race. Turning into the straight there was a line of four and I thought, ‘Gee he’s going to have to be good’ and as he quickened he just exploded. 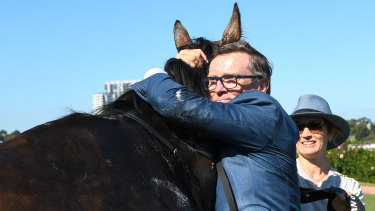 "You could see his stride change and he was dominant. He’s astounded me every start, he just keeps lifting and where’s the ceiling to him? Who knows. He’s just outstanding."

The All-Star Mile in two weeks’ time looks at his mercy, while placegetters Superstorm and Soul Patch put their names into conversations for a wildcard berth with their big runs.

However, jockey Damian Lane was disappointed with how the race turned out for his horse Catalyst.

"An outsider going forward and really backing off the tempo from outside the lead really put us in a sticky spot and I had to let him stride in the race early," he said.

"He raced a little greenly when I asked him and without a horse close to him, I just didn’t feel him lengthen as well.

"We’ll see how he pulls up and go from there but he might need the blinkers back on."

Michael Dee was as equally disappointed with Alabama Express.

"He’s run too bad to be true. He had the nice run, travelled into the straight and then hasn’t found off that," Dee said.

"He felt OK but there may be an issue there. We’ll see what the vets come back with."