Quackerjack’s surging win in the Liverpool City Cup was overshadowed by some argy-bargy from Glen Boss on Cascadian at the top of the straight that will see him miss the All-Star Mile ride on Kolding and the Golden Slipper after a high-end careless riding charge.

Stewards considered a reckless riding charge after Boss bumped Imaging, ridden by James McDonald on three occasions, forcing it off-stride as McDonald attempted to hold his ground on the outside. 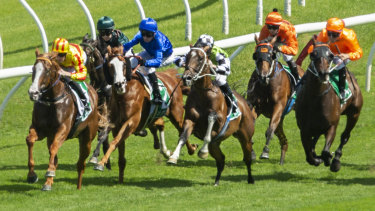 Boss argued he “was only testing the waters” on numerous occasions during the inquiry.

Stewards said Boss had initiated the contact twice, which led to the third bump that took the two favourites out of the race.

He was given an eight-meeting suspension, which starts after the Canberra Cup on March 9 and will see him miss two of the biggest Saturdays of the autumn.

Meanwhile, Vegadaze dashed clear with Quackerjack chasing him down. The Villiers Stakes winner was too strong in the final few strides.

“He showed that will to win. He has that determination to get over the line.” Quackerjack’s jockey Josh Parr said. “You know with him that he’s not going to stop. His will is just remarkable. He loves the fight.”

Mark Newnham will give Quackerjack one more run into the Doncaster, for which he is exempt from the ballot.

“He’ll have another run in the Ajax then three weeks into the Doncaster. I had it planned straight after the Villiers,” Newnham said.

Dawn of an era

Owner-breeders Robert and Pam Crosby will have two of the favourites for the group 1 Coolmore after Sylvia’s Mother and Dawn Dawn scored group wins in Sydney and Melbourne on Saturday.

Sylvia’s Mother stayed unbeaten this preparation in the group 3 Tressady Stakes at Flemington before Dawn Dawn finished over the top of Sweet Deal to take the Guy Walter Stakes at Randwick.

She need every inch of the Randwick straight to run down a brave Sweet Deal, which gave favourite punters a great sight from the front despite being softened up. The plan from Hawkes with Dawn Dawn was to be back and make sure she got clear running after being unlucky first-up. Tommy Berry followed the plan and Dawn Dawn came with Pohutukawa charging at Sweet Deal.

The trio went to the line together and Dawn Dawn got her head down on the line to beat Sweet Deal and Pohutukawa.

“This mare has been tough and honest all the way through. She has been unlucky, never got out until late when I rode her first up, and second up she bumped into a soft track,’’ Berry said. ‘‘She’s better on top of the ground, so she could have had two out of three this prep.

Blake Shinn had nursed Sweet Deal up the rise and thought she had the race in her keeping when she dropped into another gear at the 200m.

Coffs Harbour trainer Jenny Graham will face an inquiry into why Awesome Pluck was in Brisbane for up to three weeks leading into a Country Championships heat.

Horses must be stabled and under the care of a NSW country trainer to be eligible for the rich series.

Racing NSW stewards have ruled Awesome Pluck ineligible and withdrawn him from betting.

A routine stable inspection failed to find Awesome Pluck at Graham’s Coffs Harbour yard, and it was established that the horse had been at Barry Lockwood’s Doomben stable in the lead-up to the Mid

North Coast Country Championships heat. Awesome Pluck was scratched from the Taree heat by Graham because of the barrier.