The Australian Turf Club has sold its slot in The Everest to Hong Kong businessman Bon Ho for the next three years in a multimillion-dollar deal.

The deal includes an understanding that Ho is required to continue to have horses trained on ATC tracks after he decided to take his Everest runner from 12 months ago, Classique Legend, back to Hong Kong. 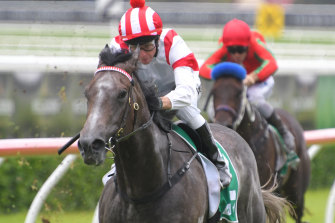 Hong Kong businessman Bon Ho could have Classique Legend run in his slot in The Everest for the next three years.Credit:AAP

Classique Legend, who will be imported to Hong Kong this month, is Ho’s most likely runner in 2020 provided he is sound and fit and will look to improve on his sixth-place finish last year. Ho holds full rights to the slot and can on-sell if he decides, but his intention is to have a runner in his colours for each of the three years.

“The Everest is a very exciting race to be involved in and I’m delighted to be able to join with the Australian Turf Club,”  Ho said.

“Sydney has one of the best racing programs in the world and I can now focus on our horses and look to lock in a runner for The Everest.”

Ho got in contact with Racing NSW and the ATC after complaining The Everest was a boys' club and no one from outside the original 12 slot holders could get involved in the race.

He had been offered the chance to buy the GPI Racing slot this year but rejected it.

The ATC slot has been the most successful in the three-year history of The Everest without winning. Brave Smash, Osborne Bulls and Trekking have all run third.

It has been highly profitable for the club and the deal with Ho will give a better return on the $660,000 investment slot than for the first three years.

“The TAB Everest continues to grow its stature and influence across the racing world and we are especially thrilled that this deal will see more horses stabled and remain in Sydney to race,” ATC chief executive Jamie Barkley said.

“Mr Ho is a passionate racing fan and one of Hong Kong’s most respected owners, so his enthusiasm to be a long-time player in Sydney and the TAB Everest is significant.

“The Australian Turf Club in conjunction with Mr Ho looks forward to further promoting Sydney’s racing and the TAB Everest to the rest of the world.”

Last year the ATC did a deal with the Melbourne Racing Club for its slot, but objections from Racing Victoria meant it was difficult for that to happen again.

Meanwhile, Glen Boss is free to ride on Golden Slipper day after getting off a Canberra Cup ride to be able to start his suspension one day earlier.

Last year’s The Everest winner on Yes Yes Yes was found guilty of high-end careless riding and given an eight-meeting suspension after attempting to barge out on Cascadian in the Liverpool City Cup on Saturday. He crashed into favourite Imaging on two occasions, eventually turning James McDonald's mount back on an inward course for a third heavy bump.