It was the game that was off, then on, then off, then on again but after a see-sawing and thrilling evening, Australia’s T20 World Cup campaign is still alive.

Australia will be there at the MCG on Sunday in an historic final against India after overcoming wet weather and all sorts of adversity to clinch a remarkable rain-reduced five-run victory over South Africa at the SCG. 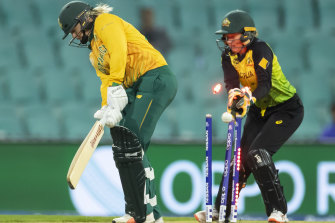 The Bureau of Meterology received some serious traction from mobile phone devices on Thursday evening in the Moore Park precinct as amateur meteorologists tried to guess the severity of storms looming around the SCG.

The ground's curator, Adam Lewis, was quietly confident on Wednesday a game would be had and his educated prediction was spot-on.

It was, however, an anxious wait as rain poured all through the afternoon, which cancelled the first semi-final between India and England.

After 32.4 millimetres of rain since 9am, the match got under way 26 minutes after its initial scheduled time and South Africa, unsurprisingly, elected to bowl in order to gauge how audacious they would need to be in a run chase.

Once on the field, Australia instantly knew the odds were in their favour to prevail.

Alyssa Healy (18) began her innings with usual exuberance but chipped a ball to mid-wicket with the bat turning in her hand. 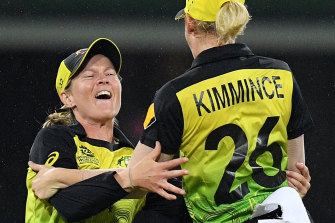 Her opening partner Beth Mooney (28 from 24 balls) was eager to hit square. She cover drove with conviction and looked dangerous before her leg stump was knocked out of the ground by an ecstatic Nadine de Klerk.

De Klerk was the best of South Africa’s bowling, returning figures of 3-19 as she removed Ash Gardner (0) and Rachael Haynes (17 from 18) to stifle Australia’s middle order.

Australia went past 100 in the 16th over as Lanning chalked up her highest score against South Africa. The cameo, featuring five boundaries, was her most productive in the World Cup and at the most critical time.

What a message it sends heading into Sunday's final from a skipper with a point to prove.

A handy 17 runs off the 18th over helped Australia post a total that would certainly be competitive, depending on the fickle weather.

Despite the unpleasant weather, organisers will be disappointed with an SCG crowd who braved conditions but the thought of Katy Perry in action in front of a potential world-record crowd for a women’s sport event … no wonder Australia’s golden girls couldn’t wipe the smiles off their faces after a brilliant win in dramatic circumstances.