England will attempt to continue to raise spirits after a rousing third day in Sydney was capped off by Jonny Bairstow’s magnificent hundred.

Bairstow notched his seventh Test century and his first since November 2018 and helped lead the fightback with Ben Stokes after the tourists had been reduced to 36 for four by Australia.

But plenty of hard work remains in store for Joe Root’s men, who still trail the hosts’ 416 for eight declared by 158 runs, and with just three wickets left.

Scott Boland comes into the bowling attack for Australia now for the first time since his injury scare and Stuart Broad chips his second ball into the deep leg side for two, before getting another couple with a clip down to fine leg.

Two more come with another uppish strike into extra cover. Solid start from Broad, Bairstow wasn’t needed in that over.

Jonny Bairstow crashes one out to Mitchell Starc in the offside but has to settle for one, leaving Stuart Broad to face his first ball from Nathan Lyon.

He manages to get off the strike with a quick nip around the corner to fine leg and scampers for a single. Confident stuff from Broad.

Bairstow can’t get a single at the end of the over so Broad has to face the music again.

Jonny Bairstow clips Mitchell Starc down to Scott Boland at fine leg and tries to get back for two.

Bairstow puts his head down and charges back towards the strike and makes it just in time before Alex Carey crashes the stumps. There was a TV umpire review but it was just to cross the Ts there, Bairstow was safely in.

A bit of luck then comes at the end of the over for Bairstow, who swings and misses the final ball but Alex Carey is not watching the ball, which clips behind him and that allows England’s main batsman to get the single he needs to stay on strike.

Stuart Broad is the next man in for England and Jonny Bairstow keeps him off the strike for now, getting an easy single off the final ball of Nathan Lyon’s over.

England trail Australia by 149 runs, with two wickets remaining. Bairstow hogging the strike is probably the best way forward from here, but Broad can hit it aggressively if needed.

Oh dear. Jack Leach was a little too ambitious there.

Jonny Bairstow puts him back on strike but Leach fancies a slog into the leg side, possibly a reverse sweep it looks like. He gets it all wrong and the ball flies straight up in the air. Pat Cummins is the man under it and it’s a simple catch. 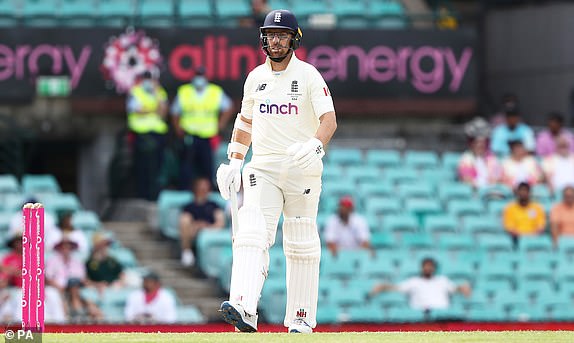 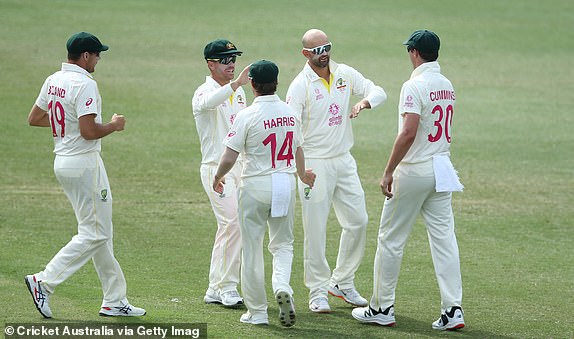 No connection between bat and ball at all. The interesting thing is that Mitchell Starc wasn’t appealing for that so I don’t really know what Pat Cummins saw there at all.

Leach remains in for England.

Mitchell Starc comes into the attack and Jonny Bairstow nips a shot into the offside for a single straight away. A bit of confidence in Jack Leach maybe?

Starc tries to target Leach’s leg stump, with the England man swinging and missing without a nick. Leach then reaches the boundary for four by steering Starc’s penultimate delivery through extra cover.

But then there’s an appeal, Pat Cummins thinks Leach and nicked the ball back to Alex Carey… 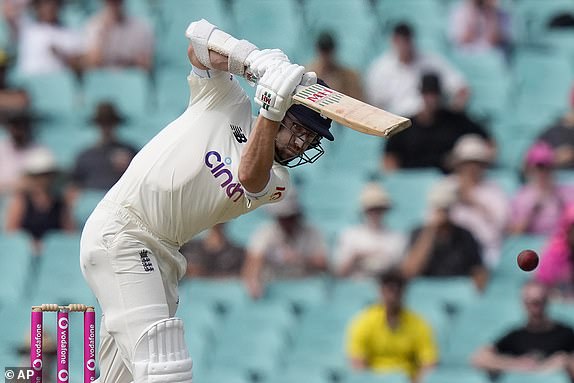 Positive start from Jack Leach, who knows just how dangerous Nathan Lyon can be.

The England spinner whacks an uppish shot down the ground and into the gap. That gets Jonny Bairstow back on strike, who get another quick single.

Early runs on the board for England this morning.

Right, out come the players. Jonny Bairstow is back at the crease with Jack Leach, looking to reduce England’s gap to Australia’s first innings total from 158 behind.

How long can England’s tail last today? Nathan Lyon to kick off the bowling…

Meanwhile, in the Australia camp, Scott Boland was passed fit late on Friday to carry on bowling in this Test after having an injury scan.

It’s a hot and humid day in Sydney so maybe Boland’s brilliant bowling will continue this morning. 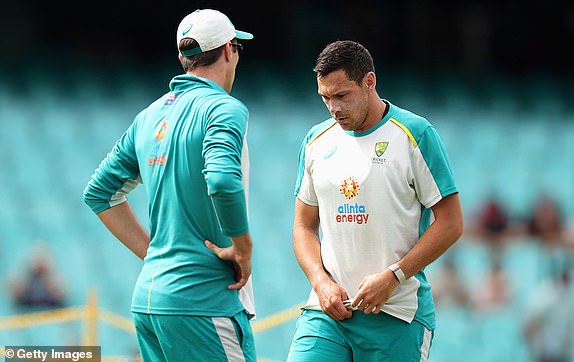 It looks like a bright start to the morning in Sydney, even though some rain has been predicted for today, so Jonny Bairstow is waiting to face Australia’s bowlers in the next few minutes.

The England man’s right thumb is quite heavily patched up and he is expected to miss the final Test next week, but he has some work to do to keep this momentum going. 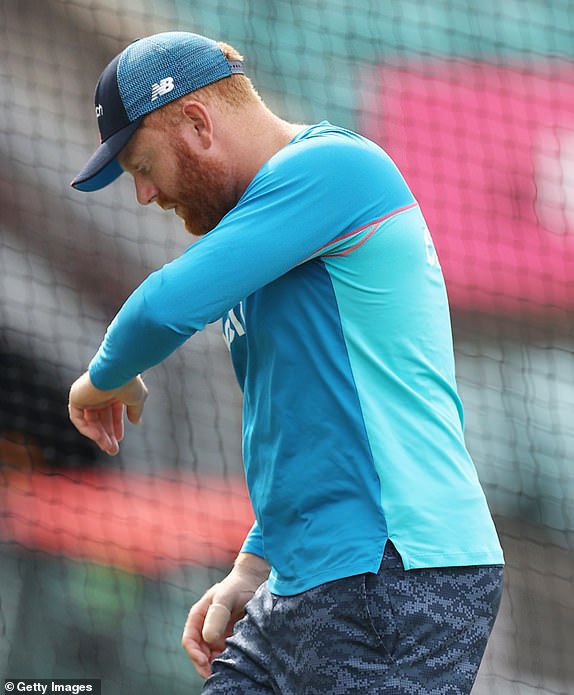 It’s been a tough summer for England’s batsmen Down Under, but Jonny Bairstow managed to go against the trend on day three yesterday.

Some news coming in from the England camp, who had a few injury issues yesterday.

Jos Buttler picked up an injury while Jonny Bairstow has a thumb problem, so Ollie Pope will be England’s wicketkeeper for Australia’s second innings.

Meanwhile, wicketkeeper Sam Billings has been added to the squad as cover, with the Kent man expected to help the team for the fifth Test.

There’s only one man on every England fan’s lips at the moment. Jonny Bairstow showed patience, resilience and precision to keep England in this Test.

‘I thought they played really nicely, quite aggressively and put pressure on our bowlers, especially Nathan. They went after him. When Stokes is in that mode he can be really dangerous. They were able to score some good runs.

‘I think we bowled well, it’s just about trying to put pressure on him (Stokes). He was defensive at times, which we didn’t expect. He’s a class player, he’s not far away from a big score.

On Bairstow: ‘He just kept going and kept the game on. He deserved 100 and I don’t think he gave anyone any chances. Credit to him and well done. 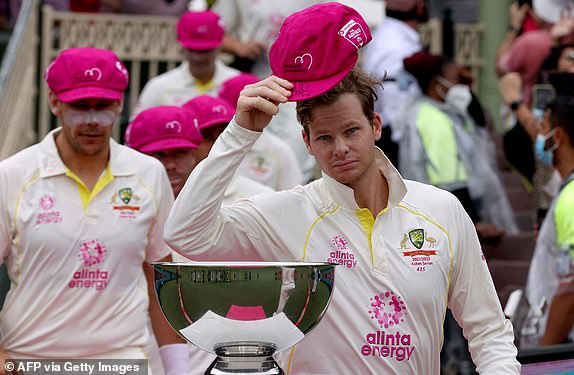 Here’s a reminder of what happened yesterday. It was disastrous to begin with for England, who were 36-4 at lunch, but Ben Stokes, Jonny Bairstow and Mark Wood helped save the day. 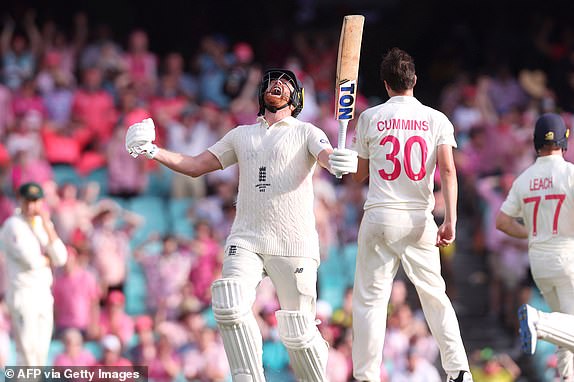