Leg-spinner Mitchell Swepson’s Test debut is expected to be put on hold again but Usman Khawaja has welcomed a Test return to the SCG as a replacement for Travis Head, who has been ruled out with COVID-19.

With forecast showers in Sydney and a strong grass coverage likely to make the SCG pitch more fast-bowler friendly, Australia are likely to retain three frontline pacemen with Nathan Lyon as the only spinner for the fourth Test, beginning on Wednesday.

Australia’s players and support staff produced negative COVID-19 results on Saturday following the positive test from Head a day earlier, which means there may be just one change.

With Josh Hazlewood still in doubt as he recovers from a side strain, Scott Boland is likely to retain his place after claiming a remarkable 6-7 on debut in the Boxing Day Test.

Khawaja, the Queensland captain, will replace Head, returning to the side 10 years after he made his debut at the SCG as a young NSW player. 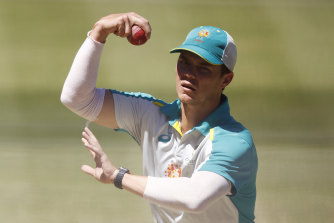 Mitch Swepson bowls on Thursday at the MCG. Credit:Getty

“I love Sydney, it’s obviously where I grew up. My family’s here, I’ve got a lot of friends and a lot of memories here,” Khawaja said on Saturday.

“The SCG, the home of cricket, if I do get an opportunity it’s always a very exciting place to play cricket, and it’s my old home.”

As Australia’s reserve batsman for the series Khawaja, 35, hasn’t played for a month after a good start to the Sheffield Shield season.

“It’s always nicer when you’re coming off games … so it does make it a little bit different, you’re out of the scene, but it shouldn’t take too long hopefully if I play and bat for half an hour and get into it. I should find that sync again.” 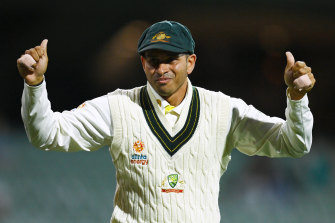 Mitchell Starc is expected to play his fourth successive match after the Boxing Day Test ended in little more than three days, while Hazlewood replacements Jhye Richardson and Boland, are coming off outstanding performances in Adelaide and Melbourne respectively.

With a week of warm weather forecast ahead of the Test, curator Adam Lewis is delighted with the grass coverage on his pitch.

He expects it to be harder and drier than last season, when it rained during the lead-up and the first three days of the match.

“I’m just praying for good weather when the game starts.

“If we get that rain and that overcast weather there’s not much we can do. It doesn’t dry out.”

Swepson, 28, deserves a Test debut after claiming 32 wickets at an average of 23 for Queensland in the Sheffield Shield last summer. It would be ideal preparation for tours of Pakistan and Sri Lanka scheduled in the next six months, where Australia would look to play a second spinner.

Chairman of selectors George Bailey is a great supporter of Swepson’s but made it clear on Thursday that he would only play if the conditions suited. It is a generation since fellow leggies Shane Warne and Stuart MacGill terrorised opponents on turning SCG pitches.

Lewis is preparing his fourth Test pitch and likened the preparation of this strip to his first during the 2017-18 Ashes.

That offers initial flashes of hope for England, who won the toss and batted at the SCG four years ago, scoring 346, a dream total on this current tour of decimation.

However, it was all downhill from there as Khawaja and Shaun and Mitch Marsh all scored centuries and Australia routed England a second time to win by an innings.

Significantly 14 of the 18 England wickets that fell to bowlers were taken by the pacemen, with now captain Pat Cummins claiming eight for the match.

Australia’s leading fast bowlers have openly discussed using a squad mentality to get through this Ashes as they did in England during 2019, when Australia retained the urn by drawing the series 2-2.

This season the changes have been forced, with Hazlewood ruled out of the past two matches, Cummins missing the second Test as a COVID-19 close contact, and then Hazlewood’s replacement Richardson missing in Melbourne with a minor leg complaint.

This means Starc, who struggled to complete last summer’s losing four Test series against India, is the only paceman to play every Test this series.

However, Bailey dismissed suggestions that bowlers would be rested.