Alyssa Healy and Meg Lanning have got four of them. Rachael Haynes has three. Ellyse Perry would have been shooting for No.6.

For a golden generation that has carried on the Australian tradition of winning World Cups, Sunday's final stands to be their crowning glory.

There have been triumphant campaigns in the Caribbean and the subcontinent but never before on home soil. World Cups in Australia are rare. This is just the third in any format in the women's game. For many in this current squad, it may be their one and only chance to reach the pinnacle on these shores. 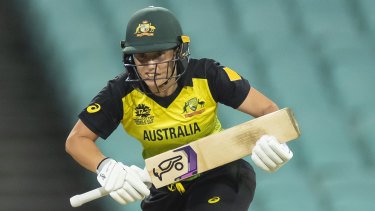 Alyssa Healy is excited to have the chance to play in front of a huge crowd in the T20 World Cup final.Credit:AAP

She is one of the world's pre-eminent players but playing before such a big crowd was at the time a pipedream for female cricketers. Before this tournament, the record for a standalone women's international in this country was 4131.

"Most female athletes around the country at the minute wouldn't think it would happen to them – for it to be a reality today is so exciting," Healy says.

The final has been an ambition for Lanning ever since it was confirmed to be played at the MCG over two years ago. She has seen the ground packed for AFL grand finals but now has the chance to be on the other side of the fence.

"This build-up to the game is something I've not experienced before and I'm quite glad that the final's here tomorrow and we can say we're involved in it," Lanning said.

"I always dreamed of being involved in this game, when I saw it was the MCG and they were hoping for a big crowd I just wanted to be involved.

"Now that we are, we're not coming here just to put in a good show.

"We're coming here to win and that's the attitude we're going in with.

'We've had such a great tournament so far, but we've got one more big effort to go tomorrow and we're looking forward to that chance."

When one of Lanning's predecessors Lyn Larsen achieved the feat in 1988 at the MCG, only about 3000, according to cricket bible Wisden, were there to see it.

Larsen featured in three successful Ashes campaigns but describes the 1988 World Cup win on home soil as "absolutely" the crowning moment of her decorated career.

The women's game has taken tremendous strides forward in recent years so you can imagine how different it was 32 years ago.

As a former captain, Larsen has a better understanding than most the pressure Lanning and her team have felt. Though her side may not have had the weight of a nation to carry, within cricket circles there was an expectation they would carry on Australia's World Cup tradition with a third straight title.

"We felt that quite heavily," Larsen says. "There was the expectation we would and the girls here are carrying the same mantle with them."

Larsen made the trek from Lismore to the SCG to see Australia defy the weather and South Africa, and will be a guest at a past players' function at the MCG organised by the International Cricket Council. She knows better than most the pressure Lanning is under.

"Because it's at home, if Meg and the girls can win this, apart from the spectacle it will be, that would be so special," Larsen says.

"The whole country can celebrate with them as opposed to by long distance in the West Indies. It will be so very special, as it was for our girls to win it at home. It's continuing that Australian legacy of the World Cup record we've got.

"Hopefully they can bring their A-game and it can be one of the most special moments of their life."

There is a strong sense within the team they are representing not just themselves and their country but also women's sport in Australia, which is experiencing a boom. Ellyse Perry, Sam Kerr and Ash Barty are among some of the most recognised names in Australian sport.

"We play a lot of big series at home but to play a World Cup is the next level up. To see the support we've had at the World Cup is unbelievably exciting," Healy says.

"To see everyone breathe a sigh of relief with us on Thursday, jumping on and supporting us, coming out to the MCG is fantastic. It always felt like the right time for this World Cup to be standalone in this country.

"To see it unfold the way it has, the talk to get 90,000 tomorrow is unbelievably exciting. I can't wait to be out there.

"It's the start of something really exciting in this country for women's sport. I hope from now on we can build on what's happened and see bigger crowds at every different sporting fixture. To be able to stand there tomorrow with hopefully a trophy would be a dream come true."