Quinton de Kock’s apology for not taking the knee has met a tepid response from Michael Holding, who is sceptical of the South Africa wicketkeeper’s about face on the issue.

But the West Indies great says he will give the player the “benefit of the doubt” and judge him on his future actions after de Kock said he will comply with Cricket South Africa’s directive to make the anti-racism gesture alongside his Proteas teammates if selected. South Africa’s next game is against Sri Lanka on Saturday night.

Cricket’s unofficial voice on the Black Lives Matter movement after delivering a powerful monologue on the issue last year, Holding labelled de Kock’s refusal to take the knee as “dumb”.

He was critical of de Kock’s mea culpa, describing it as “confusing” as it did not adequately explain how the former Proteas captain could be supportive of the cause yet fail to embrace the global gesture as a show of solidarity.

Cricket South Africa has welcomed de Kock’s apology and expressed regret over its handling of the issue, acknowledging de Kock’s assertion that the board had unsettled players by communicating the directive so close to a game.

De Kock has said he will now take a knee along with his Proteas teammates, but Holding said his previous reluctance raised questions whether he was doing it because he was told he had to, or from a genuine desire. 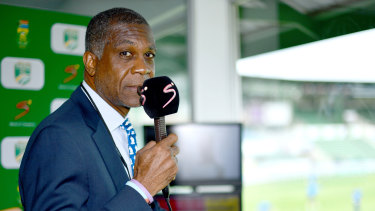 “Has he now come to the realisation that what people are trying to do is real and worthwhile supporting or did he not know what the gesture was or what people were trying to do? What was it?” Holding told the Herald and The Age. “This thing has been going on for months. This is not a new thing.

“There’s a worldwide movement going on. The entire world has accepted a specific gesture, a specific action of supporting that movement. You are going to take it upon yourself to then think I can support it another way?

Holding, though, is giving de Kock a chance to show he is indeed as committed to the anti-racism cause as he claimed in his lengthy apology.

“His actions down the road will tell us yes or no. It’s not something you can hide. You can’t hide your feelings about your situation forever,” Holding said.

“That is something people will find out whether you are genuine or not in whatever sphere of life you are dealing with.

“It’s a wait and see situation. I am happy to give him the benefit of the doubt and say he just made a mistake, and he has seen how dumb it was, and he’s changing his outlook.

“His actions brought about the scepticism, but you have to give people an opportunity to show what they really believe in. I can’t condemn him and say he’s a racist. I don’t know, I don’t spend enough time around him to know exactly what is in his heart or in his mind.

“I just know that the action that he took was dumb, it did not look good.”

De Kock pointed to his mixed race family in his impassioned defence against allegations he was racist, but Holding said one’s family ties were not necessarily a marker for their views on race.

De Kock’s half-sister, Dalean de Kock, continued her vigorous defence of her sibling in a post on social media which referred to right-wing commentator Andrew Bolt, saying his refusal to take the knee was more about freedom of speech than racism.

Former AFL footballer turned ABC sports presenter Tony Armstrong, a Barranbinya man, applauded de Kock for his apology after initially slamming the player, asking “how racist do you have to be” not to take a knee.

“What you saw in me was a direct impact of what racism can do,” Armstrong said on ABC Breakfast. “I was pretty strong, and I was probably wrongly a bit too strong, but that was a direct response to seeing a perceived lack of support to something that means so very much to me and so very much to so many people.”