Stepped on a stray cricket ball, sacked by the Test and County Cricket Board, or vetoed over a year-old tabloid scandal: Pat Cummins’ identification as a COVID-19 close contact can be added to some of the more outrageous swings of fortune in Ashes history.

Careful, attritional batting by Australia’s top order under lights at Adelaide Oval provided the cricketing equivalent of the exasperated sigh collectively uttered in reaction to Cummins’ removal from the second Test match. 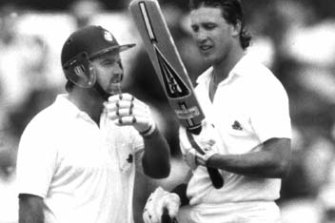 Mike Gatting led England to Ashes victory in 1986-87, but was denied the chance to defend the urn in 1989.Credit:Ray Kennedy

As David Warner and Marnus Labuschagne set about their work after another brief and skittish stay by Marcus Harris, it was almost as though they were investing deeply in the fact that, minus Cummins and Josh Hazlewood, a recast attack could do with every last run, no matter how long it may take.

This approach was quite the contrast to the last dramatic withdrawal of a great fast bowler on the first morning of an Ashes Test in 2005, when Glenn McGrath trod on a ball in warm-ups on the Edgbaston outfield, twisted his ankle and writhed in enough pain to miss the game. 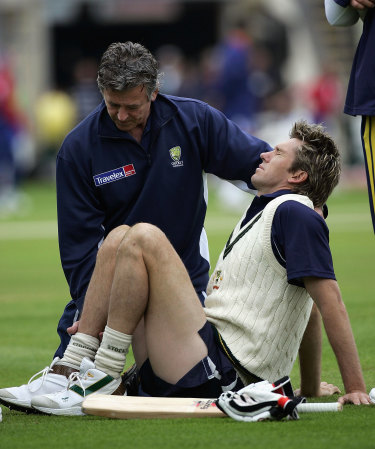 In one of the most oft-told pieces of Ashes lore, McGrath’s absence was the cue for England – generously sent in to bat by Ricky Ponting – to go on the attack, rushing to 4-289 by tea and ultimately being bowled out for 407 inside the first day.

The contest evolved into one of the greats, ending with an England victory by all of two runs and a foothold in a series that they would go on to win, ending 16 years of Australian domination, after being thrashed in the opening match at Lord’s.

Of course the loss of Cummins from the match was not only that of a fast bowler, but a captain. He had already shown plenty of evidence that his combination of maturity, skill and perspective would not only mean the team performs, but that Cummins himself can handle the demands of the job while still bowling fast and hostile stuff.

Changes in captaincy either immediately before or in the middle of an Ashes series can also have a dramatic effect upon proceedings. Never was this more keenly the case than in 1981, when Australia’s Kim Hughes, standing in for Greg Chappell, started out looking like he would be able to outpoint the addled leadership of Ian Botham. 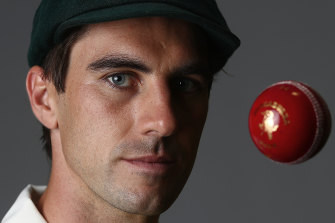 At 1-0 ahead after two Tests, Hughes was then pitted against Mike Brearley, who while no huge threat with the bat himself had critical qualities of psychology and empathy that meant he was able to get Botham back to his best while also wringing better displays out of others.

There was a fair degree of good fortune in this twist, after Botham and Graham Dilley edged and slogged their way to a narrow but sufficient fourth innings lead at Headingley. But over the remaining three Test matches, Brearley’s calm and considered presence contrasted with Australia’s increasing fragmentation as Hughes squabbled with Dennis Lillee and Rod Marsh.

A more opportune leadership change for Australia took place eight years later, in the weeks before the 1989 series. At the time, Allan Border’s improving team were expecting to face up to the leadership of Mike Gatting, who had helmed a “Grand Slam” tour of Australia in 1986-87.

That was also the first preference of the ECB’s newly appointed selection chair Ted Dexter and manager Micky Stewart, a year after Gatting had been sacked over a tabloid expose. But vetoed by Ossie Wheatley, then the chair of the Test and County Cricket Board’s Cricket Committee, they were left with David Gower.

England were, as a consequence, not exactly united. Moreover, Gower was taken aback by Border’s unbridled aggression, having been counselled not to fraternise as much with the opposition, and could not find a substantive response. One wonders how Gatting may have bit back as leader.

One thing not in dispute even as Steve Smith tossed the coin, however, is that Cummins remains the undisputed leader of the team. His missing of a match in these circumstances will stretch scenarios for how he and Smith had imagined the occasional handover, but not break the bond between the 28-year-old fast man and his team.

It has, though, given England a far less charismatic opposing captain to grapple with, something akin to Mark Taylor missing the 1994-95 Ashes series and being replaced by the obdurate David Boon – the most senior member of the team – or his then deputy Ian Healy. In Smith, Joe Root now has an opponent he knows well in both a leadership and a batting sense.

And the uncompromising way that Warner and Labuschagne went about their work as Adelaide Oval’s lights took effect had the distinct whiff of weighing up what had been lost with Cummins’ directive to seven frustrating days of hotel isolation.