Australia’s white-ball captain Aaron Finch has announced his retirement from one-day international cricket after a dreadful run of form but will lead the national team to the Twenty20 World Cup in Australia next month.

The third and final one-day match in a series Australia have already won against New Zealand, to be played in Cairns on Sunday, will Finch’s last in the 50-over format.

His departure from the 50-over format gives the selectors a year to bed down the one-day team ahead of the World Cup in India 12 months from now.

“It is time now to give a new leader the best possible opportunity to prepare for and win the next World Cup,” Finch said in a short statement ahead of a press conference in Cairns on Saturday.

Following a second-ball duck last Thursday, Finch has six single-figure scores in his past seven one-day innings for a total of just 26 runs and just one half-century from 13 innings this year, including five ducks.

His extended run of outs in one-day cricket put mounting presser of the selectors, with panel chairman George Bailey and coach Andrew McDonald recently reaffirmed that Finch, 35, would lead the national team at the Twenty20 World Cup in Australia during October and November. 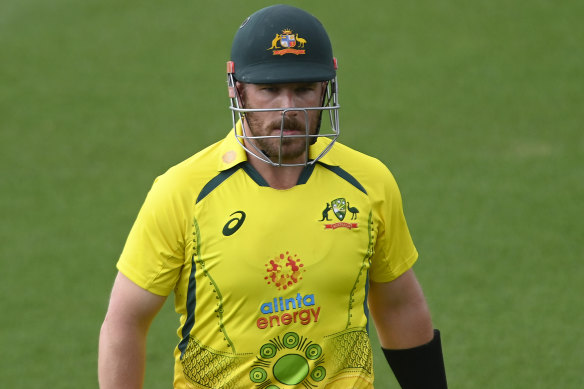 He took Australia to a first Twenty20 World Cup title in the UAE less than a year ago.

After the last match against the Kiwis on Sunday, Australia have seven Twenty20 matches and a practice game scheduled before their first official Twenty20 World Cup clash, against New Zealand in Sydney on October 22.

Finch’s Twenty20 form for Australia and the Renegades has been solid but his last Twenty20 international was in Sri Lanka in June and his one-day form since has been dreadful.

In last week’s one-day series against Zimbabwe in Townsville, Finch scored 15, one and five, while in the opening match against New Zealand on Tuesday night he also scored five.

“It has been a fantastic ride with some incredible memories,” Finch said.

“I have been extremely fortunate to be a part of some brilliant one-day sides. Equally, I have been blessed by all those I have played with and the many people behind the scenes.

“It is time now to give a new leader the best possible opportunity to prepare for and win the next World Cup. I thank all of those who have helped and supported my journey to this point.”