Australia’s cricketers, for so long the subject of scorn and derision, had bemused expressions on their faces when they entered the Southern Cross ballroom to a standing ovation last night. 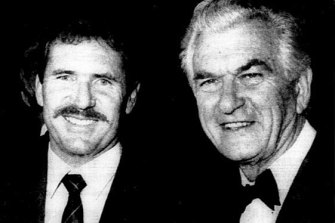 They had better get used to it: today they head to Sydney for a ticker-tape parade through the city streets, before returning to Melbourne on Saturday for a lap of honor before the VFL Grand Final at the MCG.

Allan Border’s tourists, the first side to regain the Ashes in England since 1934, were officially welcomed home last night at the Ashes ’89 Victory Dinner at the Southern Cross.

The highlight of the evening was an announcement by the Prime Minister, Mr Hawke, that Border had been awarded the Order of Australia in recognition of his services to Australian cricket.

After blaming Border and his team-mates for crippling Australia’s productivity by forcing its sports-loving citizens to spend long winter nights watching their exploits on television, Mr Hawke paid a tribute to the Australian captain. 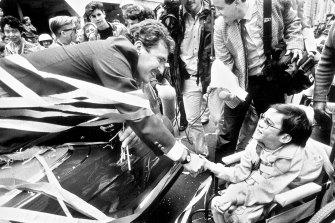 “The delight that all Australians felt when the Ashes were won was enhanced by the knowledge that, of all the Australian cricketers to whom this supreme honor could have fallen, none has more richly deserved it than Allan Border.”

Border, who took over the Australian captaincy at a time when the nation’s stocks were at an all-time low, said the award capped off “a fantastic couple of months for me personally”.

“It’s a very proud moment for me,” he said. “But I was just one of 17 very good cricketers who did a great job over in England and maybe the other players will get their just rewards further down the track.

“It’s great to return to Australia under these circumstances, as a winner. We have been through a lot of bard times, we have had occasional glimpses of glory, but nothing to compare with the last three or four months.”

Mr Hawke said that what struck him most during the tour was “the love the blokes had for Allan Border”. He was vindicated by the reaction of the Australian players, who rose to their feet at the announcement They were followed by the 800 guests who had paid $125 a head for the dinner and who broke into a chorus of ‘For he’s a jolly good fellow’.

The Australian vice-captain, Geoff Marsh, supported Mr Hawke’s comments when be said that “more than anything on this tour we wanted to win the Ashes for Allan Border”.

Last night’s black-tie dinner was also attended by the Leader of the Opposition, Mr Peacock, and the Premier, Mr Cain, not to mention a table of former teammates of the Australian fast bowler Mery Hughes from his days with Werribee Football Club.