Tim Paine’s definitive act of leadership was his decision to resign.

Regardless of whether he should have, it showed maturity and selflessness, two qualities that deserted him on that fateful night and morning in 2017.

This week he knew that to hang on would be detrimental to the team, dragging out the scandal on the eve of the Ashes. It was a distraction the side could ill afford, so Paine took himself out of the equation. It has not stopped furious conjecture over a salacious story, but it has shortened its life cycle. It was the right call.

This should not be construed as praise for Paine. It is not. There is a great deal going unreported on this matter, for a variety of reasons, but mostly to protect the woman at the centre of it, who maintains she did not leak details of the four-year-old incident.

What we can say is that almost no one writing about it, talking about it or offering their hot take on it, including this writer, can say for sure whether it is a clear-cut case of sexual harassment.

Two investigations, by Cricket Tasmania and Cricket Australia, concluded it was not. Further evidence might eventually show it was indeed a Test cricketer making an unwanted sexual advance on a receptionist at the same organisation, taking a consensual, flirtatious exchange to a darker place. 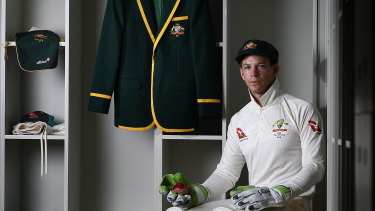 Tim Paine with his Australian captain’s blazer in 2018.Credit:Getty

So it sits uneasily that Cricket Australia chair Richard Freudenstein signalled his organisation’s foray into moral arbitration at the weekend when he flagged background checks on future captains.

“Certainly what we’ve been looking at through the process – as well as obviously captaining capability on the field – is the values, the culture and those leadership attributes that we want to see in the next captain of the Australian men’s Test side,” he said on Saturday.

“This process will be expedited now but those values of respect, inclusion, of making the sport and making Australians proud, are absolutely going to be at the forefront of the criteria that we apply.”

Put aside the stench of brand protection emanating from Freudenstein’s comments, or the fact his proclamation the current administration would have handled the Paine saga differently doesn’t marry with revelations he and chief executive Nick Hockley had the relevant facts the entire time.

His solution sounds more like a character test than a background check. It is fair enough that Australians want good people representing them in sport. But this sounds like Cricket Australia wants perfect ones. They are very hard to find.

How do you measure character, in any case? Did Paine’s desperate and lewd actions four years ago, when he was as far from the Australian captaincy as Justin Langer from the role of Australian coach, render his character poor? For how long? Was three years of sound leadership in his professional life and three years of atonement in his marriage enough to resurrect it? Who are we to sit in judgment?

Two-term United States President Barack Obama said it best in 2018, as cancel culture roared at its ferocious peak in America: “This idea of purity and you’re never compromised and you’re always politically ‘woke’ and all that stuff. You should get over that quickly. The world is messy; there are ambiguities. People who do really good stuff have flaws. People who you are fighting may love their kids, and share certain things with you.”

Perhaps we are hopeless romantics about our sporting heroes. Certainly many of our children grow up idolising athletes. Maybe the best thing we can do for them is to not expect ‘background checks’ and subjective, narrow character assessments to protect them from disappointment. The next time a Tim Paine falls on his sword, maybe the best thing we can do for our children is to open a conversation about human frailty, tell them that good people do stupid things, and that redemption is possible.