Australia are leaning towards Jon Holland over Matt Kuhnemann as Nathan Lyon’s spin partner against Sri Lanka in Galle, backing the accuracy of finger spin over the wristy revolutions of Mitch Swepson.

Holland, who first toured with Australia as far back as 2009, had an unhappy time in 2016 when also drafted in late to a Sri Lanka series in place of the injured Steve O’Keefe. This time, with Ashton Agar unavailable due to a side strain, Holland has emerged once more. 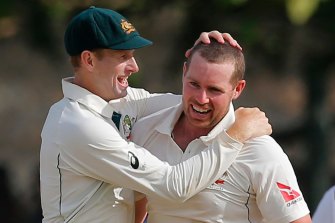 At training on Sunday, he was conspicuous as Lyon’s initial partner in centre-wicket practice, while Swepson, Kuhnemann and the young Victorian Todd Murphy twirled away in the nets. Kuhnemann and Lyon later formed another tandem before rain curtailed the session.

Over the past decade, Holland has been consistently among the best performing spin bowlers in the Sheffield Shield. Kuhnemann, meanwhile, bowled handily for Queensland last summer – 25 wickets at 31.88 – and impressed many observers during the limited-overs series.

If there is a major roadblock to Holland’s selection it will be how his body responds to extra bowling, having flown late into Sri Lanka from a Victorian winter to play for Australia A before joining the main squad. His spinning finger is in for plenty of punishment.

Usman Khawaja, hoping to finally make a big score in a Test match in Sri Lanka after two previous tours, noted that the relative simplicity of finger spin made it logical to lean that way for Lyon’s offsider rather than picking Swepson, who imparts significantly more work on the ball but may not achieve the same pinpoint accuracy of great bowlers in Asia.

In 2016, Khawaja was flummoxed in Galle by Dilruwan Perera, bowled in each innings by deliveries that threatened to turn away but then skidded unerringly into the stumps.

“Last time we came I probably thought I was a better player to handle these conditions well,” Khawaja admitted. “I thought I did alright in the first game and then I didn’t do very well in the second game [in Galle].

“I did get a lot of experiences here last time, a lot of tough experiences in Sri Lanka. Even in the one-day series we played that time. It was tough wickets and I really struggled, mentally more than anything. It was just a good learning experience.

“All that stuff I learnt then, I try to pass on now. Staying consistent, trusting your game plan even if you get out a certain way in the first innings, don’t change your game in the next innings, because that’s when you stuff yourself up.”

Where Khawaja succeeded through crease occupation in Pakistan, he knows that on the more sharply spinning pitch likely in Sri Lanka he will need to be more proactive, the better to prevent the hosts from settling onto a length.

“I have a lot more shots now to spin than I did back then,” he said of how his game had evolved since 2016. “I use my crease better, I score different parts of the ground. It’s just about trying to make the best decisions now. A bit of luck is involved too. But if I can do that for long enough, I give myself the best chances to be successful.