Years ago, when he first took physical exams at what was then known as Cricket Australia’s Centre of Excellence, the freakish nature of Mitch Marsh’s hitting ability was made abundantly clear.

Eye testing revealed that Marsh, an outstanding junior and captain of Australia’s under-19 World Cup winners in New Zealand in 2010, had such poor vision that he would have struggled to drive without glasses. 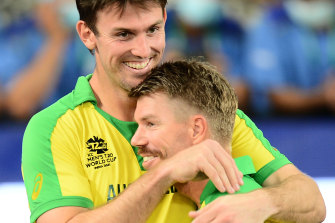 Essentially, this meant that Marsh could not pick up the pre-delivery cues of bowlers, nor clearly see the seam or release of the ball. Instead, sheer instinct allowed him to make an educated guess, before his hands caught up as the ball, well and truly out of the hand, belatedly became clearer.

While Marsh subsequently adopted contact lenses and adjusted to the mass of new visual information they gave him, it was hard to ignore the pure hitting instinct – unleashed by a clear role in Australia’s victorious Twenty20 World Cup team – at the heart of his stupendous, match-winning innings in the final against New Zealand.

One of the most telling things about the 31-year-old Marsh at this event was that he finished exactly as he started: pummelling the first ball he received from a New Zealand bowler for six. The fact he did this with the same freedom in the Cup final as he had done in Australia’s first warm-up game a few weeks before spoke volumes for his clarity of mind and courage.

As the son of the former Australia vice-captain Geoff Marsh and the brother of Shaun, Mitch Marsh has worn the weight of expectation heavily at times. This has been manifest in some nervous starts at the crease, with hard hands or an overly static batting stance making him something of a target for predatory opposition bowlers.

He has been a target, too, for the barbs of a wary Australian public, who have seen him dropped and recalled numerous times in Test matches, with only the 2017-18 Ashes summer as a period in which he fulfilled the hopes that many have held for him with the bat.

But in Twenty20, Marsh has long been a match-winner for the Perth Scorchers, turning numerous BBL games with his power and boldness in the middle of an innings. For Australia, he had also been quite successful in the middle order, scoring consistently and striking at a respectable speed for the position.

What he needed for Australia, though, was a similarly clear focus on his role in the team and a consistent run at fulfilling it, something he gained this year on otherwise barren tours of the West Indies and Bangladesh. It was in New Zealand before those tours where Marsh was taken in a direction of using his power in the fashion of a tone-setter, to the point of being unafraid to hit his first ball for six if it was in his arc.

Marsh has credited Australia’s senior assistant coach Andrew McDonald with taking him through that vision when he served as head coach in New Zealand, before he returned home to Perth and workshopped it with his long-time batting coach Scott Meuleman.

In that, Marsh personified the fearlessness – buttressed by a shift to seven specialist batters – that Australia adopted as their mindset for this World Cup. It is some distance from the “bowl tight, give them nothing” plan that the head coach Justin Langer had long preferred in Twenty20, a sort of 21st century version of what Bob Simpson once espoused for the Australian ODI team.

There was also evidence early in the tournament that, given how the team had played so few Twenty20 games together, it would be a close-run thing whether Australia could fully buy into that approach in time to contend. Certainly, the decision to drop Marsh from the game against England, reverting to five bowlers and shortening the batting order in the process, underlined how commitment to the plan might waver.

That defeat, however, seemed to act as a dose of snuff to Australia, reaffirming that their only viable path was to move forward courageously, rather than looking backwards or sidewards. Marsh, back in the team, rebalanced things, while others in the order, most notably the opener David Warner, chose boundary hunting over self-preservation.

It all added up to a virtuoso chase in the final against New Zealand, where Warner and Marsh proved themselves to be every bowler’s worst nightmare in their contrasts of left-hand/right-hand, differing heights and boundary areas. While it is true that the fortuitous sequence of tosses won by Finch was a big contributor to Australia’s success, they still had to carry it through, and in Marsh they had a cricketer with enormous ability who was looking for a statement to prove it.

Does this mean he becomes part of Australia’s Ashes plans this summer? It’s an open question, although you could not blame Marsh for thinking more in terms of enjoying his moment in the Dubai spotlight before the charter flight home alongside England’s squad.

As a Twenty20 World Cup champion, Marsh’s eyes were as telling as the day the CA high-performance staff were shocked by how he tested. But instead of squinting and searching for a cricket ball to hit, they were beaming with the kind of happiness he had been waiting a decade to feel.