Wet weather threatens to spoil Australia’s chances of advancing to Sunday’s final at the MCG. If Australia and South Africa cannot bowl 10 overs each at the SCG on Thursday, the African nation will qualify for their first T20 World Cup final. 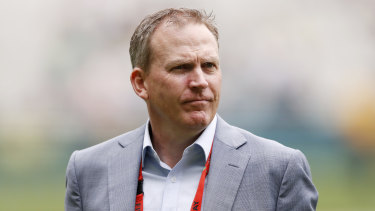 Roberts was asked about the fact that in last year’s men’s ICC World Cup in the UK there was a back-up day put into the calendar for semi-finals.

Had there not been, New Zealand, the lower ranked team, would have been kicked out of the World Cup. Instead, the match was played the following day and India lost.

"Perhaps that a case of English weather planning, I don’t know,” Roberts said.

More than 60,000 tickets have been sold to Sunday’s final, with organisers hoping to break the world record for the highest attendance at a women’s sporting fixture.

The current record was set at the 1999 FIFA Women’s World Cup final, when 90,185 fans watched the US beat China at the Rose Bowl in California.

“With or without the women’s team in the final, this is an opportunity to be part of history and a world record attempt at a women’s sporting event,” Roberts said. “It’s a moment in our lives we’ll never forget. We urge all Australians to come along and not miss the opportunity.

“Whatever happens this is a huge few days for cricket.”