Australian Test captain Tim Paine is expected to be fully fit for the Ashes despite having neck surgery in Hobart on Tuesday.

Medical staff believe the routine surgery will allow Paine to resume playing for Tasmania by early November, a month ahead of the Ashes.

Paine requires surgery to repair a pinched nerve in his neck. The operation will allow him to fully prepare for the upcoming Test summer.

The gloveman had been suffering pain in his neck and left arm due to a bulging disc which reduced his ability to train at full intensity and has not responded to treatment.

He consulted a spinal surgeon in Hobart late last week. The surgeon recommended the surgery to relieve the pressure on the nerve and allow time to return to training later this month.

“The consensus of the spinal surgeon and the CA medical team was to have the surgery now which will allow plenty of time to fully prepare for the summer,” Paine said. 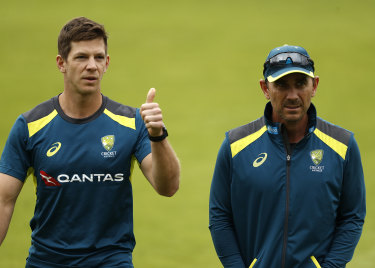 Tim Paine says he’ll be good to go for the Ashes.Credit:Getty

“I expect to be able to restart physical activity by the end of this month and be back in full training in October. I will be ready to go by the first Test and am very much looking forward to what will be a huge summer.”

Paine spoke to footballers who had the same surgery and was encouraged by their response. Former Wallaby and rugby league player Mat Rogers had the operation in 2006 and was back playing within two months.

Melbourne veteran Nathan Jones had similar surgery in 2016 and has been a decorated player for his club, although his career won’t end with a fairytale in the AFL Grand Final against the Western Bulldogs.

Jones flew home to Melbourne the day after the Demons’ preliminary final win over Geelong in Perth on Friday night ahead of the birth of twins, ending the slim hope of an unlikely Grand Final call-up.

The former skipper has played 302 games since debuting in 2006, just four behind David Neitz’s club record of 306.

Paine, 36, is expected to retire following the Ashes after being a shock selection as Test captain when skipper Steve Smith and vice-captain David Warner were stood down and later banned as a result of Sandpapergate in South Africa more than three years ago.

He has done an outstanding job as a captain and statesman helping to rebuild the credibility of Australian cricket.

Paine was a child prodigy but after numerous operations on a badly broken finger he was left out of the Tasmanian side and considered retiring to take up a position with cricket gear manufacturer Kookaburra.

He was talked into playing one more season and was selected to replace Matthew Wade as wicketkeeper for the 2017-18 Ashes series.

Paine played four Tests in 2010 as an injury replacement for Brad Haddin and performed well. He has now played 35 Tests, claiming 150 catches, making seven stumpings and averaging 33 with the bat, including nine half-centuries.