New Zealand have vowed to bring their "A game" and know their marquee players must deliver if they are to topple Australia in a cut-throat women's Twenty20 World Cup clash on Monday.

The White Ferns ensured the tournament of a tantalising clash at Melbourne's Junction Oval but only after a significant scare in a 17-run win over Bangladesh on Saturday. The Kiwis, having struggled against spin on a dry pitch, were rolled for 91 off 18.2 overs but responded by dismissing their overwhelmed opponents for 74 in 19.5 overs. 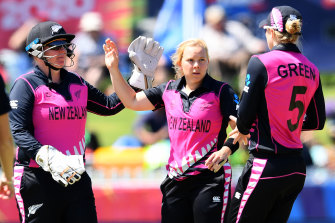 New Zealand’s Leigh Kasperek (centre) says they must bring their A game against Australia.Credit:Getty Images

Spinner Leigh Kasperek, with 3-25 off 3.5 overs, was instrumental in the win but said her side would have to play better in the knock-out quarter-final against the defending champions.

"When you are playing a quality side like Australia, you have to bring your A game in all facets of it. That's something we will be looking to do on Monday," she said.

Kasperek deflected talk that the pressure was greater on the Australians, although her teammate Katey Martin had already declared: "All the pressure is on Australia. It's a home World Cup."

India are already assured of a semi-final berth from group A, leaving the White Ferns and Australia to battle for the second group spot.

The Australians are aiming for their fifth T20 World Cup title but the Kiwis have yet to claim victory in the six previous tournaments, having been a finalist in 2009 and 2010.

However, Australia's plans to add to their trophy cabinet could be dealt a blow if star all-rounder Ellyse Perry cannot play. Perry has a hip issue, having already dealt with a shoulder problem, and may need to prove her fitness at training on Sunday. The hip injury forced her from the field during Australia's win over Bangladesh on Thursday night in Canberra.

The White Ferns most likely will need a big innings from skipper Sophie Devine, Rachel Priest or Suzie Bates if they are advance deeper into the tournament.

Devine (12), Priest (25) and Bates (15), as had been the case against India in Melbourne on Thursday, were unable to provide the decisive innings they had hoped for, leaving it up to their bowlers to drag the side across the line.

Kasperek, however, said it was a good sign that the Kiwis had still found a way to win on a sluggish pitch that had made scoring difficult.

“I don’t think it’s a cause for concern. They [the top-order] will probably be a little bit disappointed in how they’ve gone but they’ve been hitting well in training and we’re lucky we’ve got the No.1 [Bates] and No.2 [Devine] batters in the world," she said.

“I think the very fact that against both Bangladesh and Sri Lanka we’ve managed to get over the line proves that. Other people have been stepping up. You want your big players to step up in big games, so, hopefully, they can do that against Australia on Monday.

“We learnt a lot from how Bangladesh bowled in their innings. We went out there and tried to keep it as simple as possible, bowling straight to hit the wickets."

A similar pitch can be expected on Monday, giving Australia's spin attack, led by Jess Jonassen, plenty of encouragement.

"I just don't think we adapted quickly enough to it," Kasperek said, before adding her side had learnt a lot in recent days.

When the White Ferns and Australia last met in a Twenty20 international, in the 2018 World Cup in the Caribbean, Australia prevailed by 33 runs.

"I think we have been pretty close in a lot of games [against Australia]. I think it's just that confidence thing … probably [needing] our big players stepping up, especially with the bat," Kasperek said.