The Sixers will be reviewing their bowling efforts after yet another devastating loss against the Adelaide Strikers on Wednesday, who claimed victory by eight wickets to steal the Sydney side’s top-four spot.

It was the second time in two days the Sydney side has lost by eight wickets. 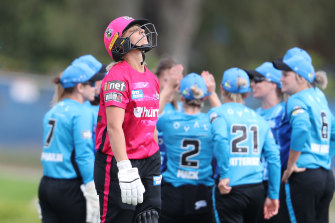 Ash Gardner departs for a duck against the Strikers. Credit:Getty

Sixers’ Indian teen sensation Shafali Verma had a brilliant day with the bat, hitting 53 not out from the middle order as she hauled the side to a total of 4-142. A dramatic top-order collapse, which saw Ellyse Perry (24), Ash Gardner (0) and Alyssa Healy (13) fall within the space of 10 balls, brought Verma to the crease and she upstaged her more experienced teammates.

But the knock was not enough to overcome a lacklustre bowling effort from the Sixers which allowed the Strikers to win with eight balls and eight wickets to spare chasing down the Sixers’ total to finish at 2-148.

Sixers star Angela Reakes said while the batters would also be looking at what they needed to improve, the bowlers had plenty to fix after taking just four wickets in the past two matches.

“With any game, you are going to review most things. They’ve maybe missed out yesterday, but we probably also missed out on the bat today,” she said.

“I think we are backing our top order. We haven’t missed out by much, and that’s just the competition these days.”

The Sixers will come up against the Heat on Saturday tonight in Mackay.

“We are looking quite positively towards the next few games,” Reakes said. “These last two games have been really tight, and could have gone our way.”

Meanwhile, the Sixers’ male counterparts have called on Sydney fans to pack out the Sydney Cricket Ground for the two-time defending champions’ first clash for 2021 on December 5.

“Last summer was something special for the Sixers and it was topped off by the amazing final at the SCG,” spinner Stephen O’Keefe said.

“It was one of the loudest I have ever heard it and it was so good just to be back in front of family, friends and our amazing supporters. It really was like a big party.

“We want to replicate that again to kick off and with crowds in December allowed to be at 100 per cent capacity, we want to sell it out. We want to be part of something special again with our fans.”