Australian captain Meg Lanning has revealed she’d never felt more nervous playing a game of cricket than she did during Australia’s matches against New Zealand and South Africa en route to their crushing victory over India in Sunday night’s Twenty20 World Cup final at the MCG.

Australia demolished India by 85 runs in the decider to claim a fifth World T20 crown but the campaign was generally nowhere near such a cakewalk. 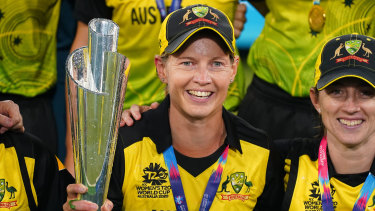 The victorious Australians celebrated on stage with pop star Katy Perry who performed to thousands of fans after the match.

In the face of unprecedented pressure, centred around the prospect of a world-record crowd for the final at the ‘G, the Aussies lost quick Tayla Vlaeminck to injury on the eve of the tournament before falling in the tournament opener to India, effectively rendering the rest of the competition a knockout event for the hosts.

Having scraped home against Sri Lanka before comfortably beating Bangladesh, Australia were left needing to beat New Zealand at Junction Oval in their last pool match to qualify for the semi-finals.

Superstar Ellyse Perry had entered the match under an injury cloud following a hip complaint, and having been cleared to play, Perry suffered a serious hamstring injury while fielding, ruling her out of the tournament.

The Aussies snuck through against the White Ferns but were almost eliminated without playing their semi against the Proteas, with rain in Sydney nearly causing a washout which would have allowed South Africa free passage to the final. 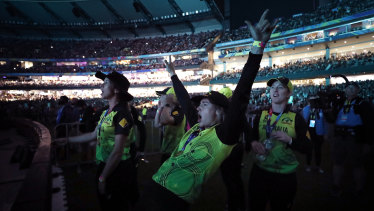 Lanning said it was the stuff of dreams.

“When they said they wanted to get 90,000 people to the MCG, I must admit I was a little bit sceptical. Immediately I thought I wanted to be there and I wanted to be involved. This day is certainly the best of my career so far.”