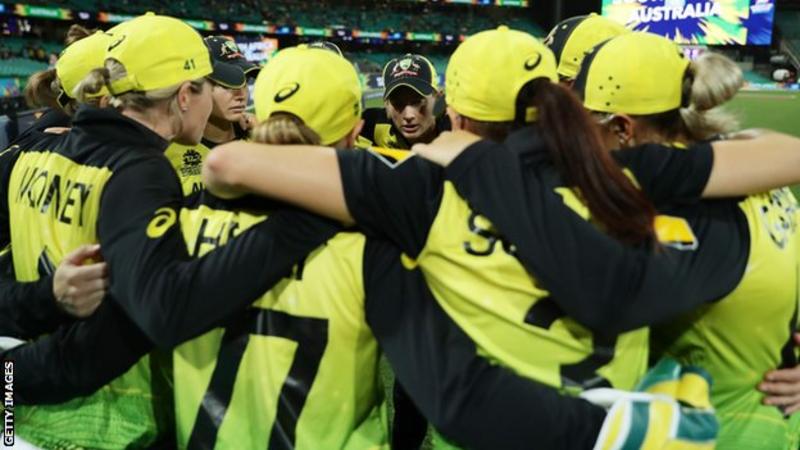 Meg Lanning is a four-time world champion, a three-time Ashes winner and she has more one-day centuries than any other female player.

On Sunday, Lanning will lead Australia out in front of at least 75,000 people at the MCG as she and her side bid to beat India and win their fifth T20 World Cup title.

Nicknamed Serious Sally by her teammates for her level-headedness, Lanning cuts a steely figure on the field.

The closest she has come to being over-animated was smashing her bat into her leg when she was dismissed against New Zealand in Australia’s must-win group game in Melbourne.

On the field, the brim of the hat pulled down low, arms crossed, Lanning analyses everything. A quiet word with the bowler here, a slight fielding change there; all of it is marshalled by the inscrutable captain.

“She’s not hard to get to know. What you see is really what you get.

“When it was raining during Australia’s semi-final against South Africa, she was signing autographs, chatting to kids. That’s not a front – that is genuinely her. It is just what she’s like.”

If Australia win on Sunday, Lanning will be the third captain to lift a World Cup trophy on home soil, yet she never harboured captaincy ambitions as a youngster.

There was no girls cricket team at Carey Grammar in Melbourne, where Lanning went to school.

By the time she reached year seven, Lanning was playing in competitions for the boy’s team at her school. She was the first girl to do so. The only girl on the pitch.

It got the usual press attention, and Lanning got the usual comments and looks at the games. But she ignored all that – as she told ABC, she couldn’t understand why it was such a big deal – and carried on playing until year 12.

She made her international debut aged 18. In just her second match for Australia, she hit her maiden one-day century, a superb 103 from 148 balls, becoming the youngest Australia to achieve such a feat.

Hartley played for Box Hill Cricket Club, Lanning’s club in Victoria, in 2012, when Lanning’s Australia career was starting to take off.

“She was playing international cricket but she always came down to training and played every single club game,” Hartley said.

“She was at training; bowling, batting, helping all the kids out. I thought it was amazing.”

There’s a sense of inevitability when Lanning comes to the crease with the pressure on her side.

When Australia were 10-3 against Sri Lanka in the group stages, having just lost to India, it was Lanning who strode out in front of a shellshocked Waca.

Sure, she benefited from some baffling tactics from Sri Lanka, and at least two dropped catches. But she was calm. She worked the singles. Accelerated towards the end. Developed a partnership with vice-captain Rachael Haynes.

Australia won by five wickets. They are now in the final. It sounds absurdly simple, but Lanning is the backbone of this team.

“She’s the ultimate clutch player,” says Australia opener Beth Mooney. “She’s got this steely look in her face and when you’re in the opposition, as I have been in Big Bash and domestic cricket, it’s not a good sight to see.”

No player has a better record in knockout T20 matches than her. In the nine semi-finals and finals she has been involved in, she has scored 322 runs. Her closest competitor is Charlotte Edwards, with 175 runs.

In the 50-over World Cup in 2017, a tournament which would see Australia thrashed in the semi-finals and spark a new determination among the players, Lanning walked out for the toss with West Indies captain Stafanie Taylor.

Taylor called correctly. She told Lanning and the match referee that West Indies would bat first. But, in the interview with Ian Bishop, she changed her mind.

Lanning did not realise at first. When she did, she was annoyed.

She spoke to the match referee, who called Taylor back to the middle. Taylor stood her ground. So did Lanning.

In the end, it was decided that Taylor’s original call would stand; West Indies would have to bat first.

There’s a cliche with women in the public eye. They are expected to be polite, to want to win, but confidence, or over-ambition, is seen as too aggressive. Too unlikeable.

Lanning is many things. She’s warm. She’s determined. She’s single-minded in her desire to win. She’s, ultimately, human – and will arguably go down as one of Australia’s greatest captains.