The two-mile feature on the second day of the meeting is being billed as the race of the week, with dual winner Altior set to be taken on by a pair of top-class performers from either side of the Irish Sea in Defi Du Seuil and Chacun Pour Soi.

With that trio dominating the market, Nicholls feels Politologue – just under two lengths behind Altior when runner-up in last year’s renewal – has been overlooked. 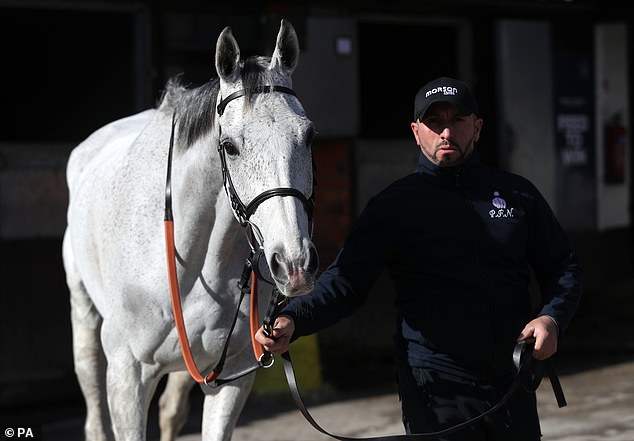 ‘We took a few horses to Wincanton this morning for a two-mile piece of work and he worked nicely. He has had a great preparation (and) if it keeps raining, it will suit him. He is a really lively outsider in the Champion Chase,’ said the Somerset trainer.

‘He is almost the forgotten horse if you think he wasn’t beaten far last year and he saves his best race for Cheltenham. He jumped the last virtually upsides Altior and wasn’t beaten too far.

‘He has come right at this time of year and looks great.’

Politologue has run just twice so far this season, chasing home Defi Du Seuil at Cheltenham in November before finishing fifth behind the same horse in the Tingle Creek at Sandown.

Nicholls added: ‘He ran very well at Cheltenham in the autumn, when giving 3lb to Defi Du Seuil.

‘We found out that he bled in the Tingle Creek – and we purposely haven’t run him since then with the idea of going to Cheltenham very fresh.’

Dynamite Dollars was one of last season’s star novice chasers before his season was curtailed by injury – and made an encouraging return from over a year on the sidelines when third behind Altior and Sceau Royal at Newbury last month.

Nicholls said: ‘He had a great season as a novice chase and won four races, including the Henry VIII. He then got a leg injury at Doncaster, which meant he missed the rest of the season.

‘We always had the plan to run him in the Game Spirit en-route to the Champion Chase. For a horse that was having his first run out of novice company and hadn’t run for a year, I thought it was a blinding run to be beaten three and a half lengths by Altior.

‘He has improved enormously for that run and also worked very nicely this morning at Wincanton.

‘He is a really lively outsider in my book and won’t need to improve much on the Newbury run to put him right in the mix.’

Nicholls confirmed Tuesday’s Catterick winner Saint Sonnet an intended runner in the Marsh Novices’ Chase at the Festival, but left open the option of switching to the longer RSA Insurance Novices’ Chase should the ground dry up.

The Brown Advisory & Merriebelle Stable Plate is the favoured handicap option for Brelan D’As, while Capeland and Greaneteen are set to form a twin assault for the champion trainer in the Grand Annual.

The latter is the 8-1 favourite with most bookmakers after winning each of his three starts over fences.

Nicholls said: ‘He won at Ascot, Musselburgh and at Fakenham last week, which was his third run over fences and enabled me to qualify him for the Grand Annual.

‘He is now rated 150. He is in the Arkle as well, but that is a tough race and if we think we could win an Arkle, we should go well off 150 in a Grand Annual. A fast-run race will suit him.’

Alcala could represent the team in the Foxhunter Chase, with Bob And Co potentially waiting for the equivalent contest at Aintree.