The family of Australian Olympic hopeful Kai Sakakibara claim doctors are growing in hope the BMX rider will wake from a medically induced coma after initially "not being confident he would survive".

Sakakibara's parents Martin and Yuki, as well as younger sister Saya, released an update on the 23-year-old's condition after he was seriously injured in a race accident at Bathurst last month. 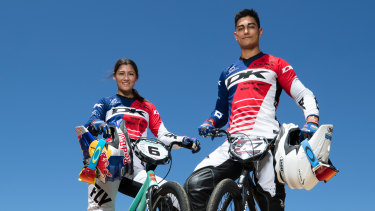 "The nurses looking after Kai 24/7 are doing an amazing job and taking great care of him. The immediate goal is to get Kai off the respirator as soon as possible so he can move out of the intensive care unit and onto the next step in the process."

Sakakibara and Saya were considered strong medal chances in Japan, the country where they spent time growing up.

Kai represented Japan in his first world championships, but elected to wear the green and gold from the age of 17.

A #KaiFight77 campaign has started on social media and spread to other platforms, support which Sakakibara's family described as "humbling".

"Every Monday at [noon] we have a meeting with the neurosurgeons, ICU specialists, nurse and a social worker where we ask the hard questions and they tell us they don’t have the answers," Sakakibara's family said.

"The reality is that it is still too early for a good prognosis, we are told Kai is progressing tiny steps at a time and we really need to be patient. This is going to take a long time and we don’t know what to expect.

"We are still staying positive and taking things day by day. The support and good wishes from everyone has been absolutely amazing and uplifting."