Tour de France overall leader Tadej Pogacar showed a first sign of weakness in the ascent of the awe-inspiring Mont Ventoux on Wednesday and even though he still extended his advantage, the Slovenian has not yet wrapped up the title.

Belgian Wout van Aert claimed a solo win in the 11th stage, a 198.9km trek from Sorgues, while defending champion Pogacar was distanced two kilometres from the top of the second ascent of the moonscaped Ventoux by Denmark’s Jonas Vingegaard. 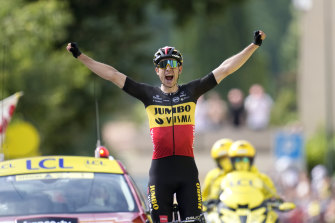 Belgium’s Wout Van Aert celebrates as he crosses the finish line to win the 11th stage.Credit:AP

Vingegaard opened up a 40-second gap before eventually being caught by Pogacar, Colombia’s Rigoberto Uran and Ecuador’s Richard Carapaz in the long descent to the finish.

Overall, Uran moved up to second, a massive 5.18 behind Pogacar with Vingegaard in third, a further 14 seconds back after Australian Ben O’Connor, who had started the day in second position, cracked in the Ventoux.

“I’m lost for words. It’s stupid to say but I didn’t expect to win a stage on this Tour de France until yesterday when I felt I could win one. It’s one of the most iconic climbs on the Tour, maybe it’s my best victory ever,” said Van Aert.

Van Aert’s Jumbo Visma team mate Vingegaard, who is the team leader since last year’s runner-up Primoz Roglic pulled out, had the best legs on the feared Ventoux and even though he did not gain time on Pogacar, the Dane showed he could hurt the Slovenian in the Pyrenees.

“In the second ascent of the Ventoux the tempo was not too high but it was not easy and I exploded in the end,” Pogacar said. 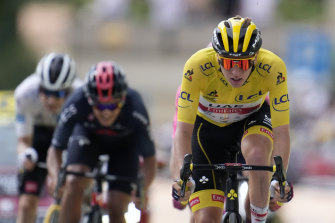 World champion Julian Alaphilippe was the early attacker as the breakaway group took shape before the Ventoux on a day that saw six riders abandon as the scorching heat and punishing profile of the stage took their toll.

Polka dot Jersey holder Nairo Quintana of Colombia and France’s David Gaudu, 10th in the general classification, were dropped in the first ascent of the Ventoux – on the easiest side, from the town of Sault.

Carapaz’s Ineos Grenadiers pulled the peloton to control the chase potentially setting up the 2019 Giro d’Italia champion for an attack, but it never came as he looked content to stay with Pogacar.

Geraint Thomas, the 2018 champion, sat up before the top as his domestique work was done, way before the peloton reached the Tom Simpson stele, where the British rider died on the 1967 Tour de France.

Alaphilippe led the breakaway group in the first descent to Malaucene, which saw Italian Vincenzo Nibali hit a whopping 107.8km/h, before the second climb to the Ventoux from the most demanding side from Bedoin (21.4km at 7.6 per cent).

Frenchman Kenny Elissonde attacked on the steepest part of the climb, 15km from the top, leaving Alaphilippe, Van Aert and Bauke Mollema chasing.

Van Aert quickly caught Elissonde and dropped the Frenchman 11km from the top, where second-placed Connor cracked as he slid down to fifth in the overall standings behind Carapaz.

Sports news, results and expert commentary. Sign up to our Sport newsletter.