Two great fillies with two great New Zealand jockeys, and this time it was Opie Bosson and Probabeel that got the result and a group 1 in the Surround Stakes at Randwick on Saturday.

Probabeel fulfilled her group 1 potential after being runner-up to Funstar in the Flight Stakes in the spring, storming to victory with a stunning surge. 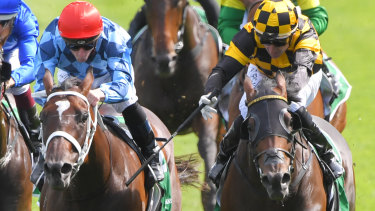 Probabeel had the drop on Funstar in the Tea Rose Stakes in the spring and just missed, and then played second fiddle to her in the Flight Stakes. But with a little edge in fitness yesterday she was too good in Surround Stakes.

McDonald gave was Funstar, who was a ring wobbler at $4.40, the perfect ride, hitting the front at the 200m mark and looking to have the race won.

But Bosson had got on his back on Probabeel ($4.80) after hitting a flat spot and proved too strong in the final drive to the line.

It has been a familiar story for McDonald the last couple of times they have meet on raceday. Bosson beat him in both Karaka Millions back him in New Zealand.

“Unfortunately I had to do it again,” said McDonald, who patted Bosson on the back after the post.

‘‘My filly was absolutely superb the way she has come back. I can’t wait for her next run.’’

Xilong ($31) ran well for third after holding up the start because of her reluctance to go into the barrier.

It would be another quinella for two of the best jockeys New Zealand has produced 40 minutes later, when Bosson once again finished over the top of his fellow Kiwi to win the Chipping Norton Stakes on Te Akau Shark.

“I’m not going to get too cocky, he is a good mate of mine and over the line he said ‘well done’,” Bosson said.

Bosson admitted he had his doubts on Probabeel when she was under pressure rounding the turn between horses.

“She always has flat spot. She couldn’t quicken when they did at the top of the straight,” Bosson said. “I just got myself into a little bit of a pocket when she hit a bit of a flat spot. I’m just lucky enough that this filly was good enough to get me out of it.’’

Jamie Richards was delighted to get the group 1 with Probabeel.

“I knew she had to be somewhere near her absolute best in a good quality race like this, but full credit to the team at home for sending her over in such good order,” Richards said.

Chris Waller was very happy with the effort of Funstar.

“She was very good and we just met one that was a bit bit better,’’ Waller said. ‘‘She is going to improve and that was a very strong start to her campaign. ‘‘She had a good blow and I look forward to meeting Probabeel again.’’

Favourite Flit ($2.60) was trapped three wide throughout and faded to finish sixth, 1½ lengths from the winner.